It was great to finally be back in our great state of Texas, and the lure of home was great.  But so, too, was the lure of Texas Tech Law, which several of the LEAP Ambassadors–particularly Karla Rosales–aspire to attend.

Before heading to Texas Tech Law, we made a quick stop by Prairie Dog Town…

…where we got to see a lot of cute prairie dogs!

The weather was rainy, but that did not stop us or them from having a great time.

We then headed to our next stop, Texas Tech School of Law. This was particularly the best part for me, as Texas Tech Law is my top-choice law school and it was my first time to be able to visit the school.

Even though it was a Sunday morning, we were able to go inside the building and explore. As we walked in, we were welcomed by the West Texas Legal Legends wall where there are plaques for distinguished Texas Tech Alumni. We continued by taking a quick tour of the building… 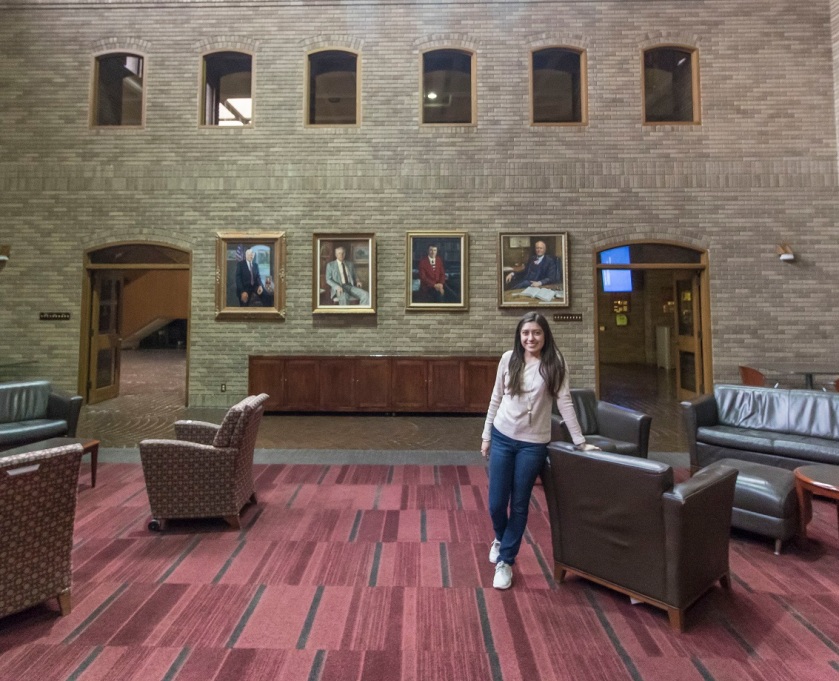 … and the Mark and Becky Lanier Professional Development Center where the auditorium and the Donald Hunt Courtroom are located.

We continued our exploration of Texas Tech and learned that Texas Tech actually has a lot of public art and beauty throughout their campus. 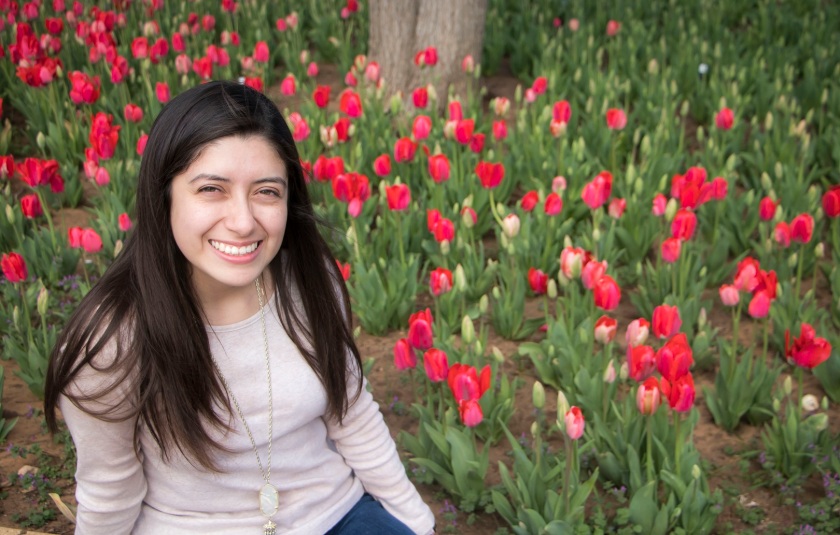 We saw a couple of Jesus Moroles sculptures, which are always nice to see as we can make that connection to Huntsville.

We also saw an art piece by one of my favorite artists, Deborah Butterfield. The piece was titled “Water River” and depicts a life-size horse.

The material used looks just like twisted tree branches, but is actually bronze! Her art is so fascinating to see. Another one of our favorite was called “The Read Reader” also known as “The Bookman,” by Terry Allen…

…which we have learned so much about at the Moody Gallery in Houston.

It’s always nice to see famous artists around the country and find a local connection. Texas Tech definitely is full of wonderful art pieces all over campus…

…and it is fascinating to see how it enriches the cultural life on campus through diverse public art by many famous artists. ​ 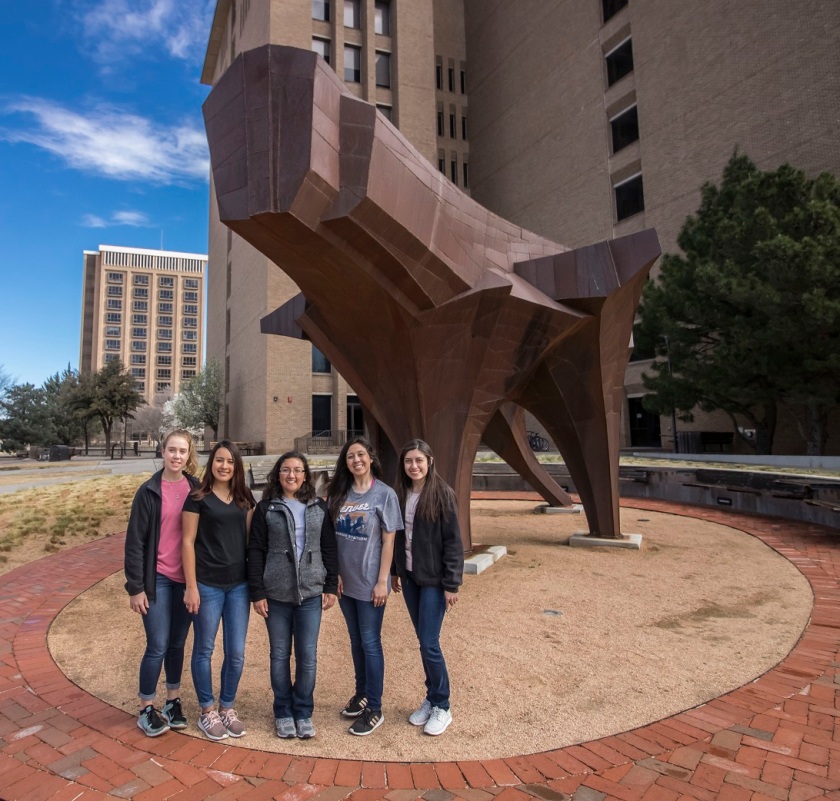 And with that last glimpse, we headed back to our home in Huntsville.

The last day of our Western tour would include a lot of driving through Texas as we made our way back to Huntsville. We broke up the day with multiple stops along the way and incorporated many of our favorite things into our drive!

We began our morning in Lubbock–home of Mac Davis and Buddy Holly–by creating our own tour of Texas Tech’s campus public art. For Brian and Christina this was their first time at Texas Tech University. They are known for having a remarkable public art collection on campus because of Texas Tech University System’s public art program. We began by mapping out our art scavenger hunt that Professor Yawn had scouted out the night before. The first sculpture we saw was The Read Reader (a play on “Red Raider”) by Terry Allen, an artist we became familiar with thanks to Betty Moody. 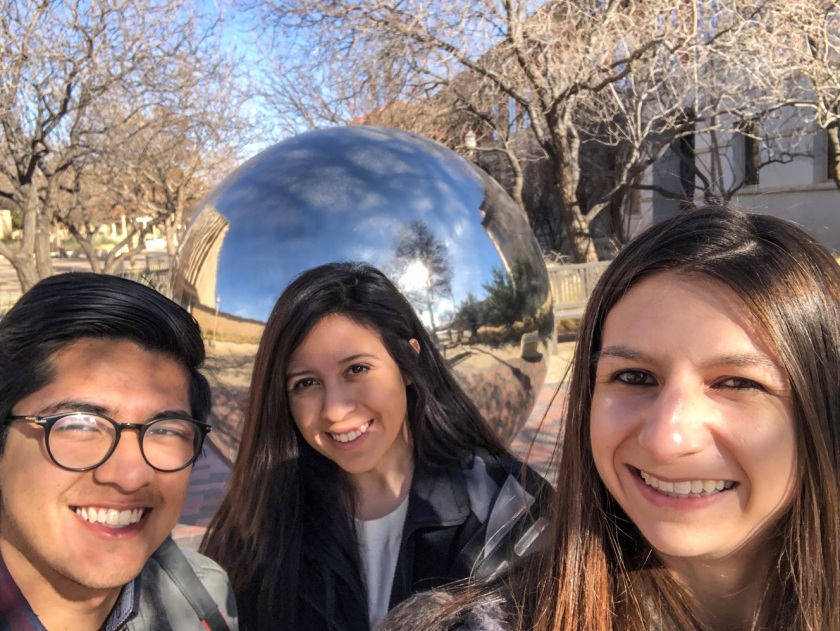 …and Prometheus by Charles Umlauf. As we kept walking we also saw a familiar piece by Glenna Goodacre. 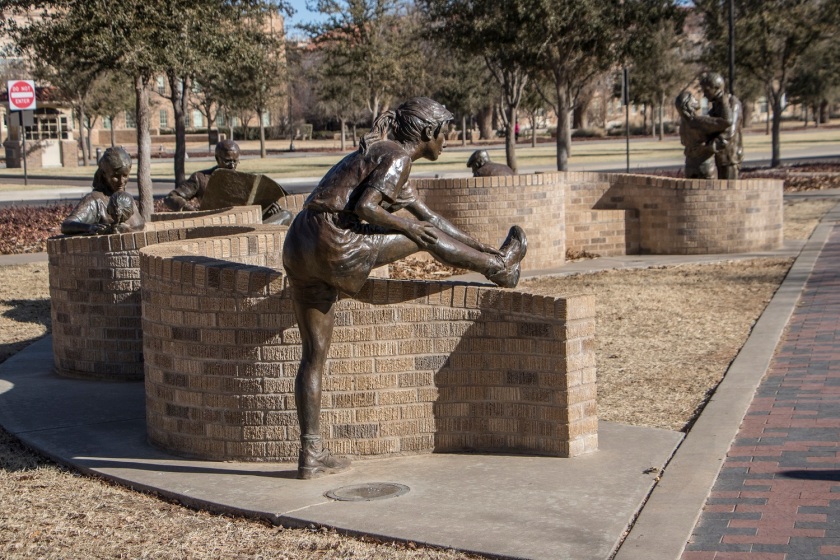 We had seen her work at the Albuquerque Art Museum, so it was exciting to recognize her art. Professor Yawn led us to a Jesus Moroles sculpture, The Lapstrake Gateway: A Portal of Discovery.

Professor Yawn told us to keep lookout for a horse sculpture, but we had no idea it was a Deborah Butterfield horse!

One of the last sculptures we saw was the Steel Horse by Robert Bruno near the Architect building.

Bruno was a new artist to us, but it wouldn’t be the last of his art to see in one day. We definitely enjoyed looking for familiar art around the campus and worked up an appetite too!

We knew our trip to Lubbock would be incomplete without sampling Spanky’s famous cheese sticks. We ordered two plates and sat down to enjoy them. They weren’t as large as we remembered, but they were sufficiently large that we didn’t finish them, despite their tastiness.

Before leaving, we made a brief stop at the Buddy Holly Center, taking the opportunity to get a photo with Buddy Holly’s famous glasses–or, rather, an oversized version of them.

Holly, the singer of “That’ll Be the Day,” “Peggy Sue,” “Everyday,” “Think it Over” and “Words of Love,” also had a huge influence on music, being a particular influence on The Beatles. Plus, his glasses sort of look like Brian’s.

Before officially leaving Lubbock, we took a detour to a neighborhood overlooking a small lake. At first it looked like a normal neighborhood until we turned a corner and Robert Bruno’s home became visible. Robert Bruno taught at Texas Tech University’s Architecture department before passing away in 2008. He was even featured on HGTV’s “Extreme Homes” and The Learning Channel. The home looked very similar to the sculpture on campus named Steel Horse. 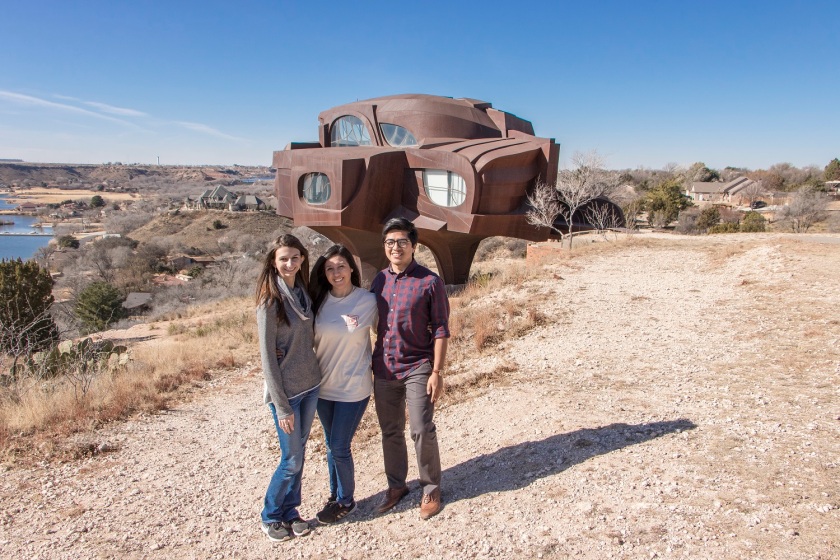 Unfortunately, he passed away before the home reached completion and it is now kept up and available by tour, with the hopes of completing the interior. 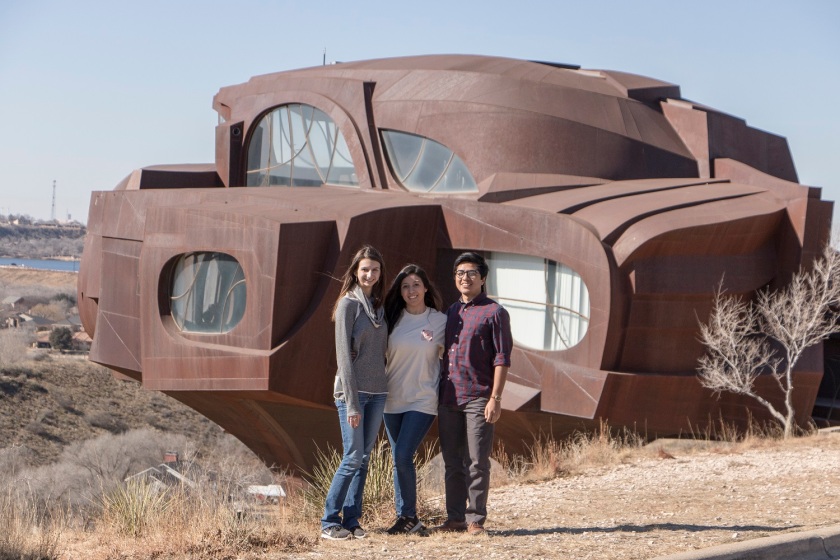 We admired the originality and the architectural details of the home, and we were grateful that, although our stay in Lubbock was brief, we filled in as much exploring as we could.

After considering the question for about 2/7ths of a second, a majority of students thought it would be a good idea to leave Lubbock, Texas on Saturday afternoon, rather than spend another night in Lubbock.  Thus it was at 4:30pm that we drove home from Lubbock and into the path of a Tropical Storm.

Before we left, we stopped at One Guy’s Pizza, which was very good!  It was fortunate that the portions were large because, as it turned out, we wouldn’t be eating again for a long time.

As it turns out, Lubbock looked just fine in our rear view mirror.

Austin, for example, was fascinated by the windmills… 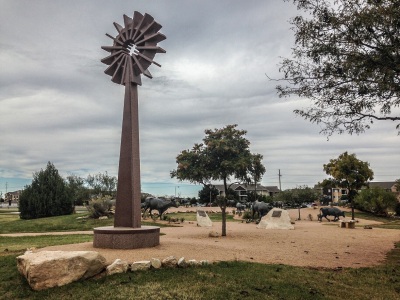 As we moved to central and then east Texas, however, the weather turned stormy.  It was raining heavily by the time we got to Eastland, and the water level rose further as we approached I-45.  Ominously, as we came within 10 miles of 45, we noticed that side roads were closed, with officers blocking them.  Sadly, this was also true when we arrived at I-45.

To get around what we thought was construction, we drove about 20 miles east, toward Seven Points, then southwest to intersect again with 45.  Our plan worked.  We took the ramp to 45 and headed south–at 11:30pm, we were less than two hours from home!

Our joy dimmed somewhat when we realized we were the only ones on the highway.  This, we surmised, was unlikely under normal circumstances.  Within ten miles, we saw that I-45 was completely blocked.  This time we asked the officer what was going on, and he said the highway was closed because of flooding.  He advised that we drive north to Corsicana, then drive west to Waco, then drive south to Bryan, then drive east to Huntsville.

But we dutifully slogged our way home.  Of course, just outside of Bryan we were stopped at a Railroad Crossing, waiting for what Austin called “the world’s longest train.” 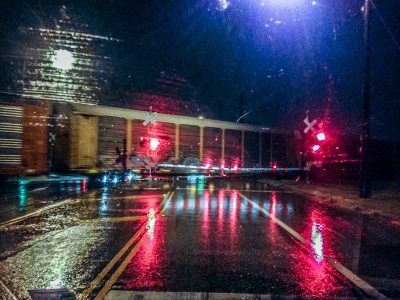 A little after 3:30am, we got to the green lot, and we scattered in separate directions, going home after a long, but successful trip to Lubbock, Texas.

For all of SHSU’s teams, the opportunity to participate on the moot court team has helped us each become well-rounded and develop skills to help prepare us for law school and our careers as attorneys. Each person grew as a result of our moot court preparation and the guidance we received from our coach, Jean Loveall. Half of the team will graduate soon, while the other half is already anticipating next year’s moot court competition. Many thanks go to the Texas Undergraduate Moot Court Association for organizing the competitions each year, Texas Tech Law School for hosting the competition, the LEAP Center for providing the opportunity to compete in Moot Court this year, and our Coach Ms. Loveall who has helped each of the team members grow and learn in preparation for our regional competition.