We began our last day in Savannah embarking on an adventure. We went on a dolphin tour through the Savannah River and Atlantic Ocean. It was a sunny day, perfect weather for a boat ride.

Our tour took us past Tybee Island and into the Atlantic Ocean.

The view of Tybee Island from the ocean was nice. We encountered a shrimping boat that attracted many pelicans and dolphins.

The majority of the dolphins we saw today gathered around the boat because they feed off anything the shrimpers throw back into the ocean. My personal favorite was a baby and momma dolphin swimming together!

The Southern Legislative Conference provided us with lunch on our dolphin tour. We had packed sandwiches, chips, fruit, and a cookie for dessert. It was an okay lunch with a great view.

We learned much in the process.  For example, the US government has established several “bird islands,” where birds can go to nest.  Predators’ populations are controlled and care is taken to ensure that birds have a natural habitat.

As the tour came to a conclusion, it started raining. Fortunately, we dodged any serious storms. The tour was perfect way to begin our last day in Savannah, however we still had a long day ahead of us.

After briefly freshening up, we headed out to the Liquid Sand Glass Gallery to look at the glass art. 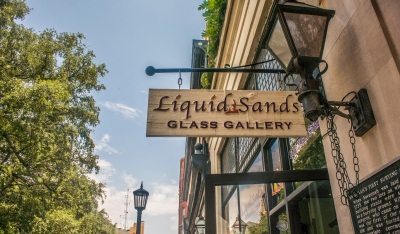 We browsed the store and a couple of us bought glass nail filers that we’re pretty excited about. On our way back to the car, we stopped at a nifty shop right next door that sold many natural products such as soaps, seasonings, and oils.

After some shopping, we visited the birthplace of Juliette Gordon Low… 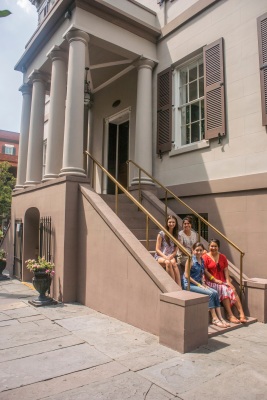 …and, a few blocks away, her carriage house, where she founded the Girl Scouts of America.

Megan and Alex tried to get into the Girl Scouts photo with us, but they weren’t Girl Scouts, so we wouldn’t let them be in the picture.  Well, they were in the picture, but not in any official capacity.  The photographer captured them sulking in the background.

We also took another look at the Andrew Low House (Juliette Gordon Low’s Father in Law).

After taking photos, we made our way to Forsyth Park to see the famous Savannah water fountain that was built in 1858.

The fountain is striking from a distance… 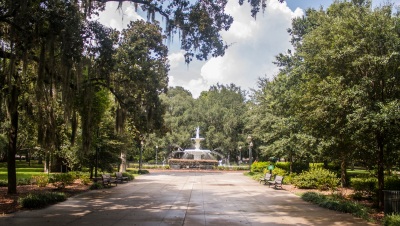 …and from up close… 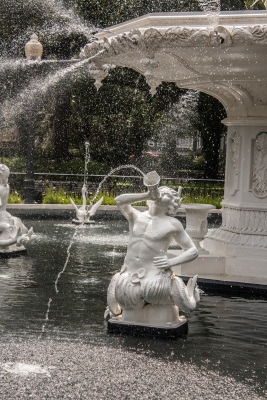 While at the fountain we took some selfies, group photos and tried to capture the beauty of the fountain.

Forsyth Park was laid out in the 1840’s so we really enjoyed the giant Oak trees covered in Spanish moss.

We also took a look at the Confederate War Monument in the Park, one of many veterans memorials in Savannah.

By the time we were done “modeling” for the camera at the fountain, we were all ready for Leopold’s Ice Cream. Leopold’s Ice Cream was founded in 1919 by three immigrant brothers from Greece and has been visited by many including Johnny Mercer, the famed lyricist.

We each tried Leopold’s famous Ice cream sandwiches. They were absolutely delectable! 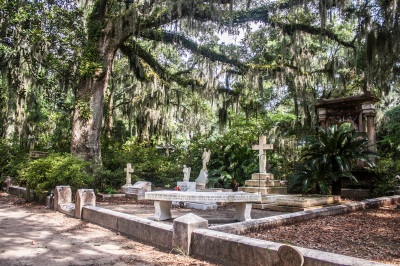 He wrote a hit song called Moon River and today he still makes profits from his music. The cemetery overlooks the Moon River, so while there we snapped some photos of us and the famous river.

For many years, the Bonaventure Cemetery was the home of “The Bird Girl,” a statue featured on the best-selling  book, “Midnight in the Garden of Good and Evil.”  Because of the success of that movie, however, visitors flocked to the cemetery, and the sculpture was moved to Jepson Art Center.

The visit to the cemetery was interesting. While leaving flowers at gravesites is popular, we saw rocks on tombstones at this particular one. We couldn’t figure out what they represented, but they were different and some rocks were beautiful. Because we were running short on time, we didn’t spend as much time as we would have liked to, but nevertheless we enjoyed our time learning about Mr. Mercer and Moon River. 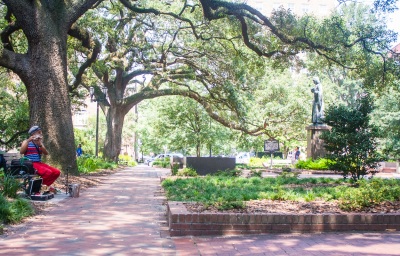 Every evening, the conference has hosted a reception for socializing and networking. Each night, the receptions have been fun and memorable. This evening, the final night of the Southern Legislative Conference, we attended the State Dinner, which featured presentations and speeches by elected officials and entertainment. The dinner theme was “Georgia on my mind.” All the details of the décor reflected Georgia and its signature items, such as peaches and cotton.

We were pleasantly surprised when the LSC staff asked the four SHSU students to represent Texas in the flag parade.

While elected officials represented most of the 15 states attending, Texas was represented by four college students!

Following the parade, the Georgia Speaker of the House, David Ralston welcomed the conference attendees and thanked everyone for their dedication to the conference.

Dinner began where we enjoyed the filet mignon and peach glazed chicken among sweet tea and southern style sides.

Our table consisted of our group and Mr. & Mrs. Hickman. Mr. Hickman is the Deputy Staff Director of the Senate Finance Committee in the Virginia Capitol. Both Mr. and Ms. Hickman were knowledgeable and very welcoming, they offered interesting history facts about their hometown of Richmond, Virginia and travel tips for when we have the opportunity to visit Virginia. Our dinner conversation was pleasant and we were happy to have met them.

Although most of his set was new material, he closed with some redneck jokes, including:

Comedy was an amusing way to end dinner.

Comedy did not end the evening, however.  That honor fell to Sheila Raye Charles, the daughter of the late Ray Charles.  She sang some new materials, some covers of various artists (including Maroon 5) and covers of songs made famous by her father.

Just before we left, Ms. Hickman, introduced us to her friend and Virginia State Senator, Barbara Favola.

Senator Favola offered her advice and experiences on how to pursue a career path in politics one day. She was very knowledgeable and gave us some insight to her career. Throughout our Tour of the Deep South, it has been interesting to learn about how state legislatures differ from Texas’s. Thank you to Ms. Hickman for introducing us to Senator Favola!

After a few final pictures, we headed back to the hotel to get ready for our early morning departure and next full day of sightseeing in Alabama and Mississippi. Reflecting back on our time in Savannah, we have learned a lot about the rich history of the city and immensely enjoyed all the sightseeing. Thankful for the opportunity to attend the Southern Legislative Conference, we are sad to leave the beautiful city of Savannah…

…but excited about visiting more cities in our Tour of the Deep South!