We knew that today would be great because we were going to spend part of the day shopping! Early Monday morning we hit the squares to find souvenirs, clothes, and candy. City Market is full of small shops that are all unique. As we were shopping we also had the opportunity to visit many of the areas within the historical district we learned about the day before. After we finished City Market, we also walked down River Street (conveniently named for its location on the Savannah River) to do some last minute shopping and enjoy the view. The group bought gifts for our family members, including lots of candy from the Savannah Candy Kitchen. We all have thoroughly enjoyed the pralines. Savannah has the best by far! With all the purchases and walking around the squares we worked up quite an appetite and we decided to try a local pizzeria called Your Pie.

Your Pie was a welcome break from the heat and humidity Savannah summers offer. We decided to split the ten inch pizzas, which turned out to be the perfect sharing size. However, before the pizza arrived, we indulged in cheese sticks, but we considered them to be more like cheese bread. Megan and Alex decided to custom make their pizza, while Kaitlyn and Karla opted for a specialty pizza called “The Nat”.  When the pizzas arrived, we were not disappointed at all. Fresh out of the wood fire oven, the cheese was perfectly gooey.

The pizza gave us energy as we headed down the block to Mabel’s Cupcake Emporium.

Rumored to have the best cupcakes in Savannah, we wanted to see for ourselves! After ordering various flavors, we agreed that the Rich Butter Vanilla cupcake was our favorite.

After lunch, we continued our sightseeing of historic Savannah. Our first stop was to the Cathedral of St. John the Baptist. Built in 1863, the cathedral is one of the tallest structures in Savannah.

When walking in, we all paused in amazement of the intricacies and beautiful interior of the Cathedral. 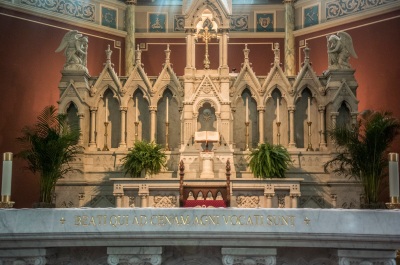 The church brings many visitors every year because of its beauty and Gothic architecture. One of the intricate details of the church included numerous stained glass windows with detailed biblical scenes on them.

The walls also had decorative narratives from the Bible.

The grandeur of the Cathedral can be observed from every angle which we thoroughly enjoyed.

Also, in our free time we visited Chipewa Square where Forrest Gump filmed a scene where Forrest famously says “Life is like a box of chocolates, you never know what you’re going to get.” In an effort to recreate the picture, we searched the bench where the scene was filmed, but came to the conclusion that the bench had been moved for the purpose of filming the movie and chose one with a similar view.

And a group photo at the fountain.

Once we we’re finished touring and shopping at Historic Savannah, we headed to Tybee Island. While in Tybee we visited the Tybee Island Light Station and Museum.

We eventually all reached the top of the light house which is 145 feet tall and 154 feet above sea level. Some of us were nervous to step out onto the ledge of the light house but everyone eventually got to enjoy the view despite the phobia of heights. We even got a peek at the lighthouse lens, which was always on and required a 1,000 watt bulb–the brightness of which was amplified by numerous and layered reflectors. 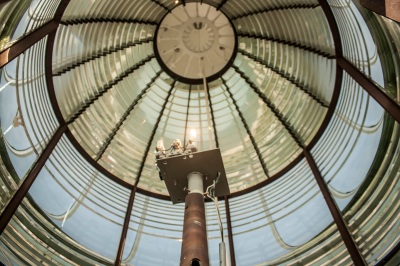 The system that was put in place consists of two lightbulbs, one in use and one ready to light up when the other burns out.

The top was windy, but it didn’t stop us from taking selfies… 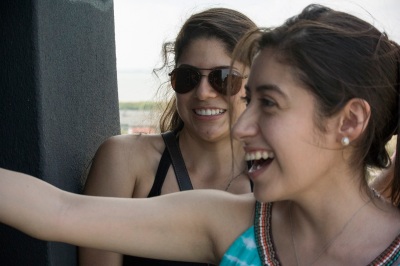 and shots of the view from the top.

After taking many pictures at the top and enjoying the view along with the breeze, we descended down the flight of stairs again. Once we finally reached the ground we were able to tour the homes of the Lighthouse Keepers that were built in 1881. We enjoyed wandering inside the homes and finding old metal irons and telephones that had once been used.

We exited the Tybee Lighthouse and Museum through the gift shop and headed across the street to the Fort Screven Museum.

In the museum, we learned about the origin of the settlers and meaning of Tybee. The Spanish were the first to arrive on Tybee and we also learned that “Tybee” is a Native American word for salt. As we walked through the museum, we were able to see how much has changed in the past century. We saw an old diving outfit that had a helmet which weighed 31 pounds! We also walked through an exhibit that showed the evolution of the swimsuit, which we found very interesting. The museum had an exit onto the roof top so we went up and enjoyed the beachfront view for a while before heading to dinner.

After the adventurous tour at the light house and Fort Screven, we headed to the Crab Shack for dinner. Throughout our travels, many people recommended the restaurant to us, making it a must try! The restaurant’s decor was interesting and the food was great (visitors be warned: no air-conditioning). We had their specialty sampler dish for three with shrimp, crab, crawfish, mussels, potatoes, sausage, and corn. Our food was served on one larger tray which brought enough food for the entire group of six to eat.

The restaurant also has a mini-gator farm, where patrons can feed the baby gators with “gator treats” (for $3…).

Since we were extremely close to the ocean, we hoped the seafood would live up to our grand expectations and we were satisfied when we walked away.

At the beach, we enjoyed the waves and the sunshine.

While some of us searched for seashells on the beach, others went swimming in the Atlantic Ocean. Luckily for us, it was perfect weather for a day at the beach. Of course, before we left, we took some nice pictures on the beach, one with our backs to the beach… 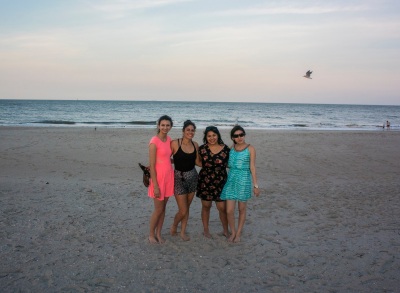 …and one facing the beach…

…and even one of us jumping…

Ending our delicious dinner and fun times at the beach, was time to get back to the hotel to freshen up for the Kentucky Kick off Reception.

As the day came to a close, we joined the other participants of the STL conference on the Kentucky Bourbon Trail. This was a kickoff social for the upcoming STL Conference in Lexington, Kentucky next year.  Governor Beshear of Kentucky, Kentucky Speaker of the House, the Kentucky President of the Senate, and the Mayor of Lexington flew in and gave an introductory speech and expressed their excitement for the upcoming STL Conference in Lexington by formally inviting guests.

The highlight of the speeches was Governor Beshear’s, which highlighted themes of togetherness:

I want to talk about what brings us together.  You know about Kentucky’s horses, and the Kentucky Derby; you know about the first Saturday in May; you know about our history; but I want to stress more substantive things, what really brings people together: short, tall, black, white, male, female.  Kentucky Bourbon!

He also highlighted the success they’ve had in the production of bourbon. Kentucky has 4.4 million residents and 5 million barrels of bourbon, how fascinating is that? “That’s one barrel for every resident, and the rest is for you!,” he exclaimed, to much applause.As it turns out, Kentucky produces 95% of the world’s bourbon, and the other 5%, according to Governor Beshear, “is counterfeit.”

The group closed with a serviceable rendition of “My Old Kentucky Home,” and many in the audience knew enough words to follow along. The song was written by Stephen Foster, the “father of American Music,” who also wrote “Oh! Susannah” and “Camptown Races.” 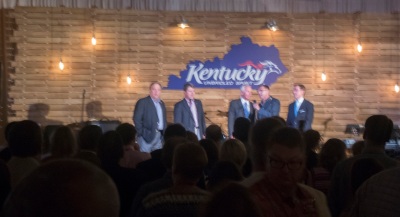 Sadly, no one offered to sing “The Eyes of Texas” or “Deep in the Heart of Texas.”

There were small refreshments for us to enjoy throughout the night. We tasted the ham and beef mini sandwiches. Also, the homemade bread pudding was scrumptious.  I think all of us would agree that we have had the best and second best versions of bread pudding we’ve ever tried, although we were in disagreement as to whether the Paula Deen bread pudding (with rum sauce) was  better, or whether the Kentucky version (with bourbon and more icing) was the best.  Our plan was to wait on the bread pudding until we got to its home, New Orleans, but that plan went out the window.

The others tried the various cheeses that were available and seemed to have been a fan. Kentucky did a great job of putting out the best of the state. We watched the mingling for a while and after a while decided that tomorrow will come early, so it was time to head back to the hotel. On the walk home I reflected in the day and was kind of sad that my stay in Savannah will soon be over. For a few of us, Professor Yawn treated us to a bike taxi which was a fun way to end the evening and see a little more of beautiful Savannah!

Each day, we’ve been having a great time learning and experiencing new things. Tomorrow, we will make the most of the day…for it will be our last day full day in Savannah.