Separating the “governing” part of our day and the “campaigning” part of our day was the local pizza joint, “Frank & Angie’s.” While everyone grubbed on the delicious food—pepperoni with Canadian bacon pizza, pepperoni garlic bread, cannolis, and tiramisu—Professor Yawn elucidated the various cultural allusions in the restaurant.  It is named for Frank Sinatra, and the menu includes references to Italian superstars, Sergio Leone, Mario Puzo, Bela Lugosi, and Mira Sorvino.

With well-fed stomachs and minds, we moved on to the second part of our day: the Campaign Bootcamp, sponsored by the Annette Strauss Institute’s New Politics Forum. Our introduction to the process was by Taylor Foody, the coordinator for the NPF…

…who introduced our two mentors: Matt Glazer and Luke Marchant.  They introduced themselves, explained why the affiliated with the parties they did (Glazer is a “D”, and Marchant is an “R”), and issued our campaign marching orders: to run a successful “mock” campaign for  US House.

Our training then began in earnest, with Rob Johnson and Cliff Walker—veterans of local, state, and national campaigns—who covered the recruitment of political candidates. After noting that running for offices has nothing in common with “West Wing” or “House of Cards,” they discussed the importance of running for offices for the right reasons (e.g., making your community a better place) and the importance of hiring competent campaign managers and financial advisors who, beyond being competent, should also have integrity. 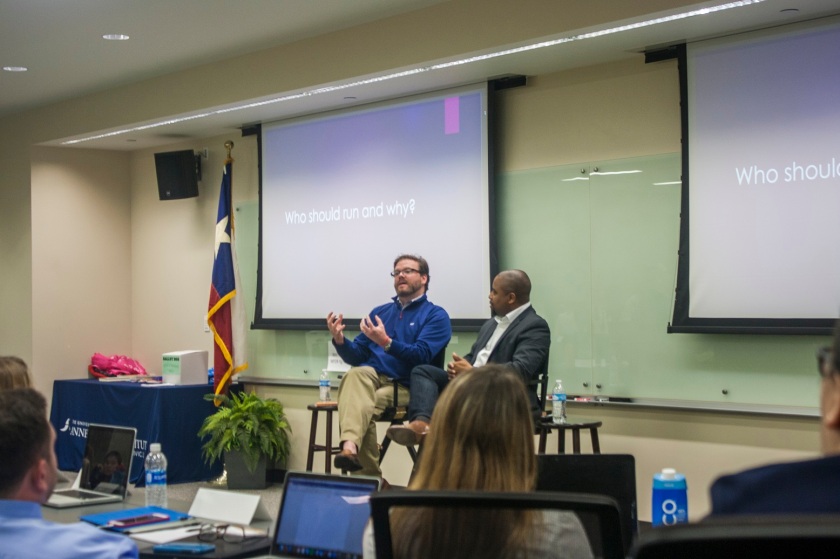 Session Two was led by Taylor Holden, who is the Development Director for New Era Colorado, but who has Texas campaign experience.  She was very energetic—she drank coffee during her presentation, we noted—even as she discussed fundraising and budgeting. 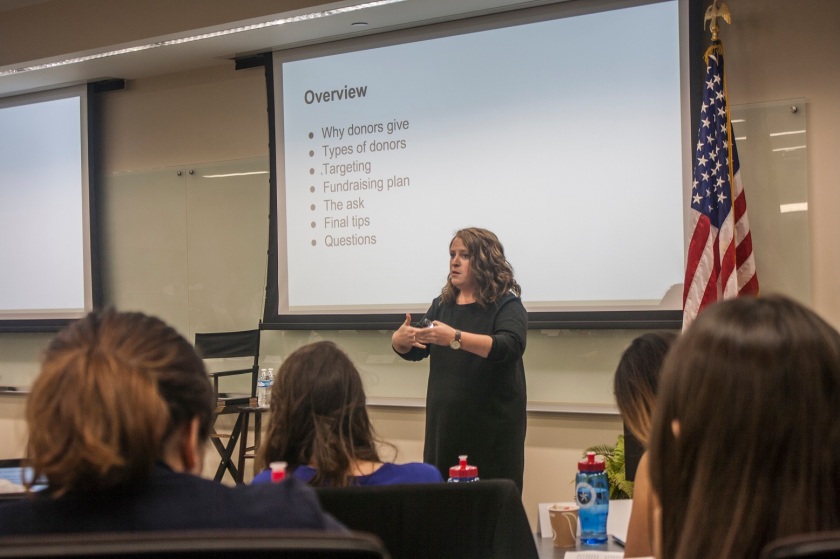 Campaigns cannot run unless there is sufficient money.  Her points were simple:

The importance of urgency was not lost on us, not with only fifty-two hours to meet our campaign team, learn about our campaigns, learn how to campaign, and develop a campaign plan.  With that in mind, Ms. Foody allowed us to meet with our campaign groups.  Christina and Isabela were placed in separate teams for separate Republican candidates, and Brian was on a team working for a Democratic candidate.

Our closing session—the keynote—was presented by Austin City Councilman Gregorio Casar, who discussed city politics and his campaign experience.  Casar, who was elected at the age of 25 and is a New Politics Forum alumnus, offered an interesting presentation not only because of his advice (e.g. “rely on friends”) and personal story (e.g., the youngest person to ever serve on Austin’s City Council)…

…but also because of the interesting things going on in Austin’s politics.  For example, most people know that Austin recently required Uber and Lyft to abide by the same regulations as taxis, but did you know that Austin also prohibited local employers from asking about criminal records on their applications?  Even large corporations are now required to change their Austin applications to avoid any mention of a police record.  This led to much debate among the students, a debate stopped by Mr. Marchant’s admonition that we are here to learn about campaigns, not to debate policy.

It was an interesting close to a day in which we learned about both policy and campaigning and much else, much to our delight and edification.