For most, Friday is a day to exult the end of the work week.  For five SHSU interns, however, it was a sad day, a reminder that our week in Austin was coming to an end, at least for now.

Last Day in the Capitol

I worked in Representative Zerwas’s office for the second half of the week where I was able to apply the concepts I previously learned in Senator Schwertner’s office. I was able to see some differences between the Senate and the House, but in actuality, they work in similar ways. During the week-long “internship” I was able to familiarize myself with Correspondence Management System (CMS), deal with constituent issues via telephone and mail, and even do some bill analyses. Both Senator Schwertner’s and Representative Zerwas’s staff were very friendly and helpful in teaching me how things in their office and in the Capitol function.

I thought I knew the process on how a bill became a law, but there was so much more to it than I realized! There is a team of teams system behind this process. The Legislative Counsel helps with drafting the bill and the Legislative Budget Board helps assess the budget impact of the bill.  And while the office staff typically initiates the bill, the staff also listen closely to constituents.  Many of the ideas behind the legislation come from constituents, who alert their representatives to what is working and what isn’t.

The great part to this is that everyone in each of the offices works great as a team and everyone I encountered at the Capitol was very friendly and helpful. I think that’s a huge plus when working together to accomplish the same goal.

I also learned much more about how committees get their work done and what it means to be the Chair of a Committee. Representative Zerwas is Chair of the Higher Education Committee, a committee that will be meeting this Tuesday, prompting much preparation.  Interested, knowledgeable, and affected parties often testify at these hearings, providing additional information that may be helpful in finalizing the bill.

I was fortunate to see some of these preparations unfold.  I was invited, for example, to lunch with Representative Zerwas’s staff and David Montagne, a member of the TSUS Board of Regents.  It was a privilege to be able to learn from the expertise of others, and I was glad to be brought into the loop.

Following lunch, we returned to the office, where I finished up working on projects I was given, and thanked the staff for the wonderful opportunity I was afforded.

After our last day as interns in the Capitol, we headed for a tour of the University of Texas Tower.  As you might expect from the site that witnessed one of the first mass shootings on a college campus, security is tight.  Following a discussion of rules and regulations by the tour guides (UT students), we  crowded into a small elevator… 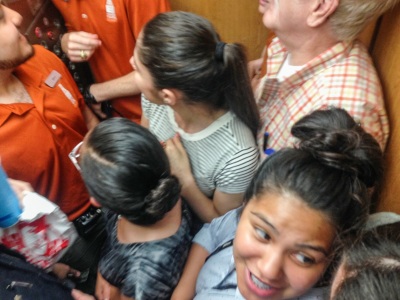 At the top, the tour guides offer background on the UT Tower. The tower was completed in 1937, and it continues to be one of the most recognizable buildings in the city of Austin. Paul Philippe Cret designed this building, which is two feet taller than the Austin Capitol Building. The building was originally used as an old-school library, one that utilized the card catalogue system.  Approximately 25 percent of the tourists knew what a card catalogue system was, so that was explained to us, before we were freed to explore the observation deck.

The wire cage enclosing the observation deck are to prevent suicides, which is a rather sobering thought.  Even with the wire, however, the views are impressive!

Interestingly, the tower offers a protected view of the Texas Capitol.  By “protected,” I mean that the City of Austin passed an ordinance prohibiting the building of any building that obstructs views of the Capitol from the Tower.  It is one of 35 or so such protected views in ATX.

With a play to attend at 8, we had to hustle for dinner.  Fortunately, the New World Deli (“where bland is banned”) accommodated our schedules, offering good foot, to boot.

As we headed for our table at the restaurant we found a huge surprise. Our team mom, Stephanie, joined us for dinner and will join us for the rest of our weekend! We began to tell her all about our week-long internship while we waited for our food which consisted of sandwiches for everyone and salad for Megan. Even though we were stuffed at the end and were in a rush to get to Austin Playhouse, we still made room and time for dessert. We enjoyed some key lime pie and salted chocolate chip cookies which were delicious!

After dinner, we headed to Austin Playhouse for the musical, A little Night Music. It was a humorously romantic musical, penned by Stephen Sondheim and Hugh Wheeler. 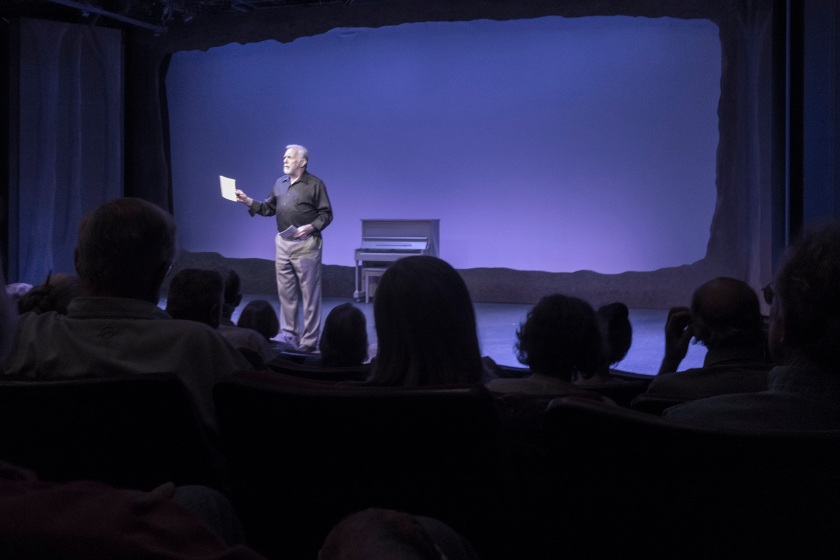 As one of the most famous musicals, it’s plot is well familiar while also being intriguingly complex.  With six main characters and as many love triangles, the play mixes humor, great music, and bittersweet romance.  On top of its complex plot, the songs also offered complexity, with duets, trios, and a couple of patter songs.

But this was a more complex and serious piece of musical theater than we usually see, and we’re glad we had the opportunity.  The music was great, the acting was fine (the Austin Playhouse uses professional actors), and the cast was excellent!

It proved another late night for us, but it was a musical and fittingly bittersweet end to our “work week” in Austin.  But just because our work week is over, our education continues, with trips to the Bob Bullock Museum, town parks, and other educational excursions awaiting us tomorrow.  Our panoramic view of Austin and the political world continues!

I’d like to thank the staff in Senator Schwertner’s office (especially Ariel Traub) and the staff in Representative Zerwas’s office for hosting me this week.  Thank you!