Although our official work week was over, it didn’t mean our education was complete.  Accordingly, we planned out a day that involved virtual exploration, actual exploration, and some adventurous food choices!

We began our morning with virtual exploration of the National Park system at the Bob Bullock Museum.  The Museum was presenting America Wild: National Parks Adventure.  It was narrated by Robert Redford, whom we had just seen in Butch Cassidy and the Sundance Kid on Thursday, and it reinforced some of what we had learned when we brought Mark Burns to campus in March to exhibit his photos of the 59 national parks he had visited and photographed in Black and White.

The Documentary was created to commemorate the one hundredth anniversary of the National Park Service.  Although Abraham Lincoln, Teddy Roosevelt and others had taken steps to preserve America’s most treasured lands, it was Woodrow Wilson who signed the legislation enabling the National Park System for generations of Americans to enjoy.

The documentary was in 3-D, so we put on our glasses, sat back, and enjoyed the show… 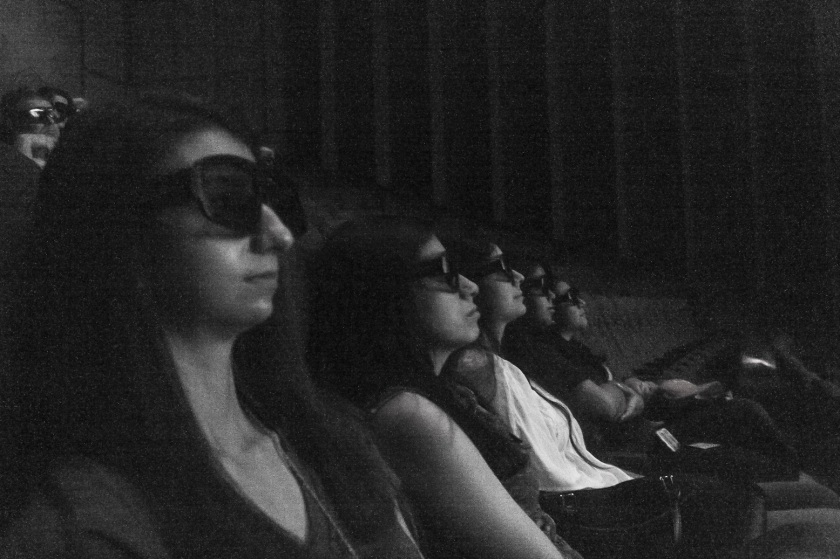 …while reinforcing our appreciation of the National Parks in the United States.

The Bullock Museum also has a limited exhibit of photographs from the National Park System, and we were followed up the documentary with a viewing of the photographs. 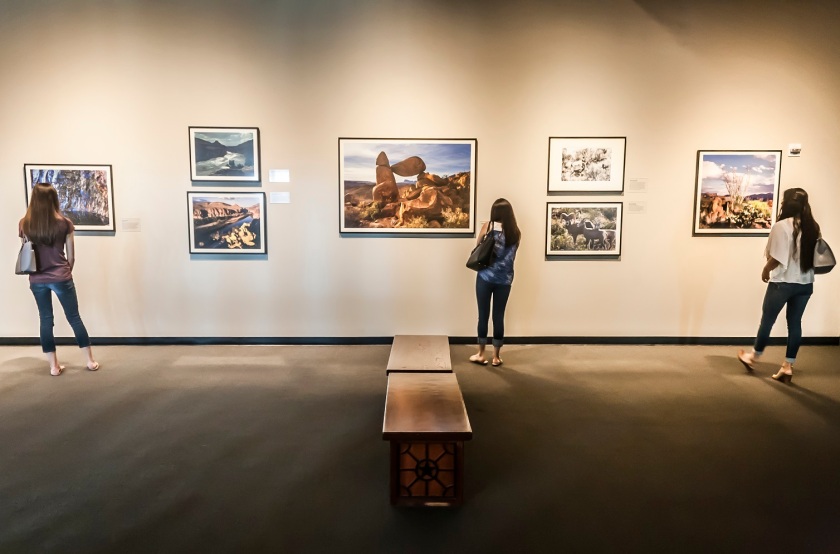 After seeing a high-adventure documentary, we chose to experience some of that adventure ourselves.  That evening, we headed off to the Rowing Dock to get in some kayaking.

It took Karla and me (Alex) a while to find our rowing rhythm, but once we did, we sped up to catch up with the others.

The river was full of kayakers, canoers, and paddle boarders rowing up and down the river and under the busy bridges. I admired the mix of city and nature as we paddled up the river.

It was a combination that I am not accustomed to seeing. After a while of paddling, we all gathered under a bridge that seemed to be making a strange sound. We stayed there for a while as Professor Yawn explained to us that the noise was being produced by bats! Apparently “South Congress” is known for its bat population that flies out at sunset every day.  We paddled along and saw a few more interesting water mechanisms; a swan boat, a Cambridge Racer… 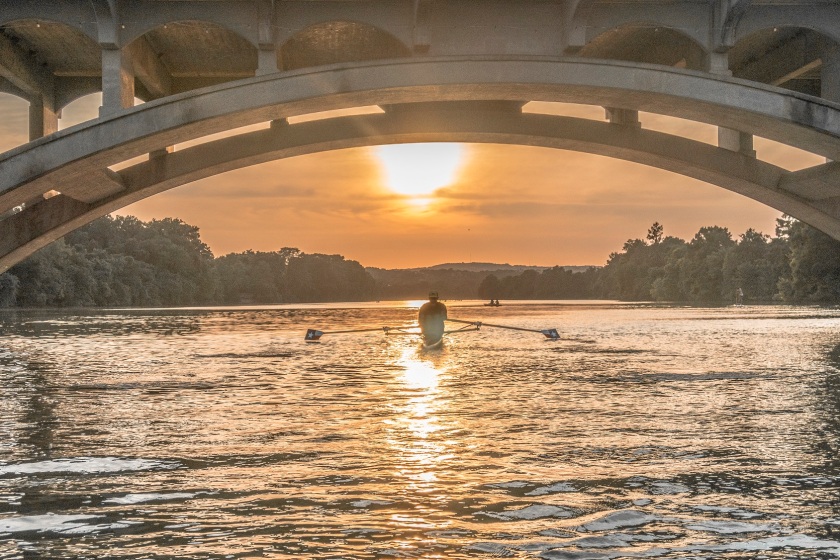 ….and paddle boards with bicycles as the motor. But mostly we all just enjoyed the exercise… 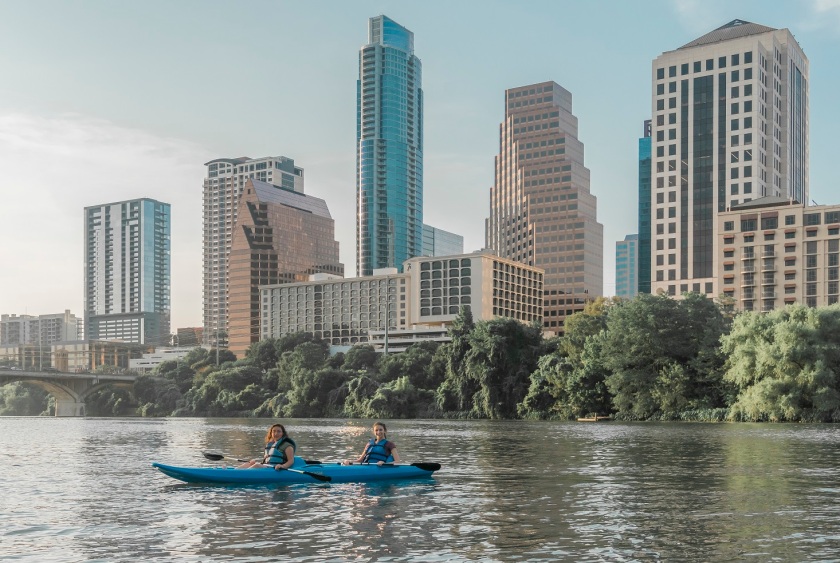 …actually, we enjoyed the sunset a lot…

…and even the moonrise. 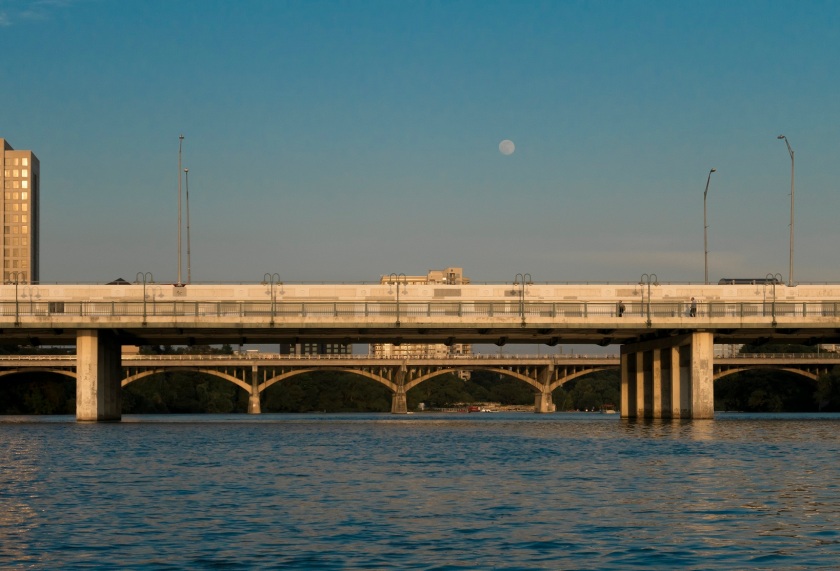 In fact, we were so taken with the moon that we were a little late getting our kayaks back.

It was a satisfying adventure all around. 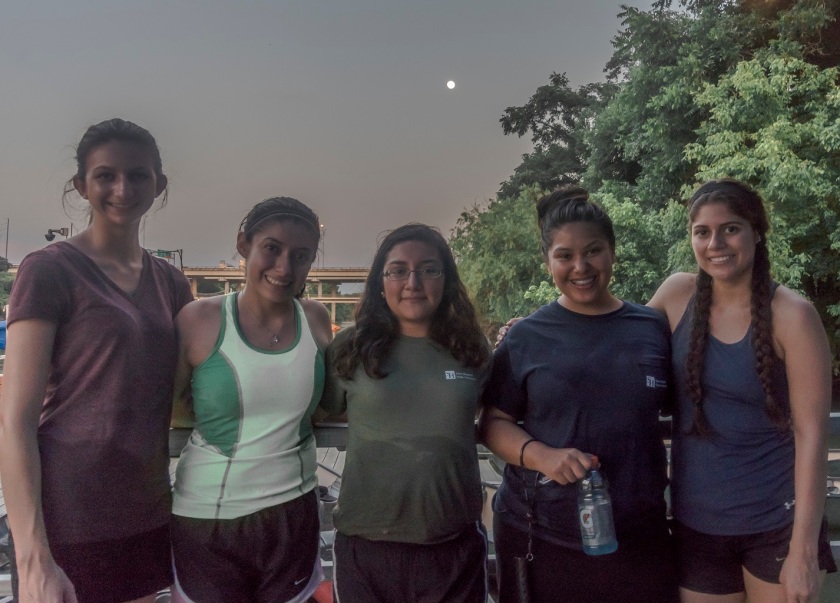 After learning about the bats under the bridge, we decided to get a look for ourselves.  Accordingly, we scurried off to the Congress Avenue Bridge, where hundreds of people gathered to watch for the 750,000 or so bats that begin coming out around sunset. 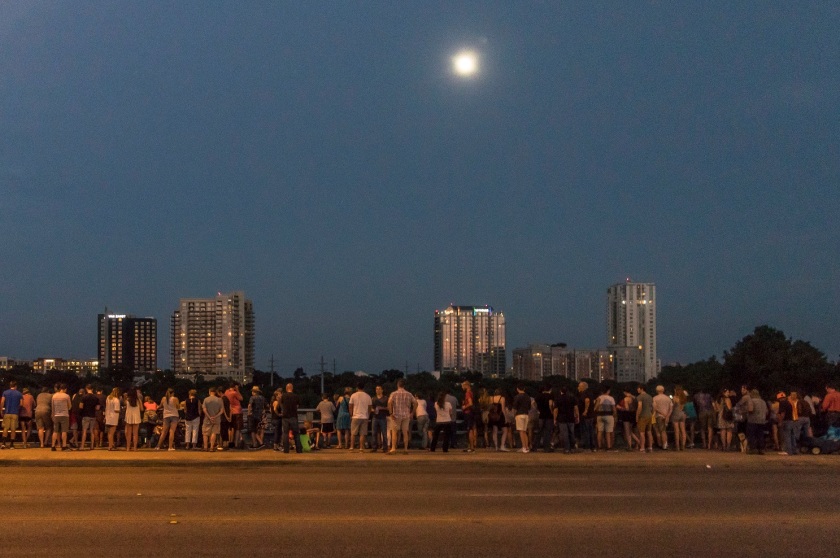 We didn’t see 750,000 bats, but we saw a lot of them!  They are difficult to photograph, however, and we didn’t get any usable photographs, at least not of bats.  We did get a decent group shot, though: 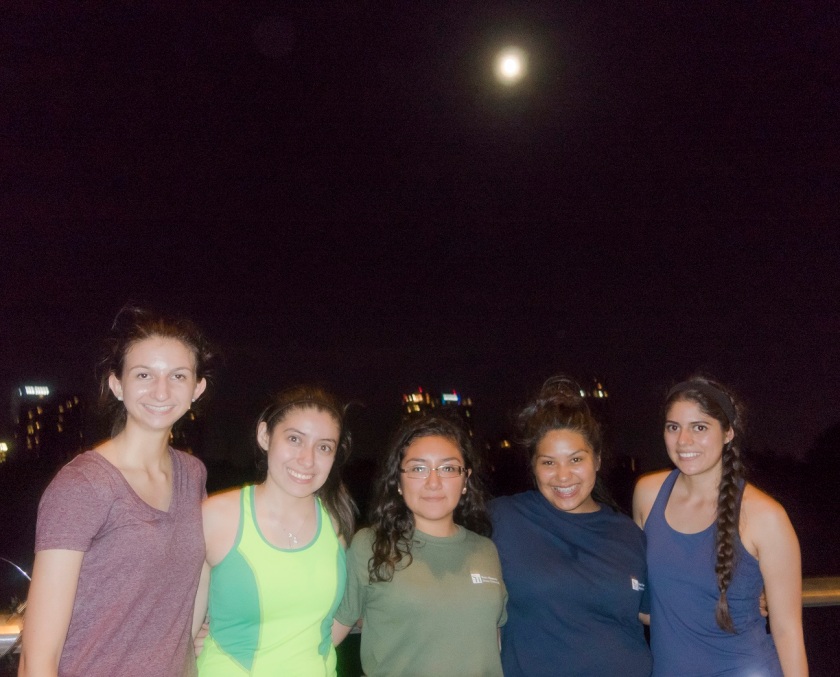 With more time than typical, we could explore our food tastes.  And explore we did!

For lunch we enjoyed Indian cuisine at Clay Pit, a place known not only for its food, but also for being housed in the Bertram historical building.  The Clay Pit offers a lunch buffet, giving us the chance to sample varieties of food.  Starting with crunchy fried veggies to the scrumptious Chicken Tikka Masala we stuffed ourselves with food in a classy environment filled with Indian music. Accompanied with these dishes were naan: some filled with melted cheese and jalapenos, while others had sweet cherries, nuts, and raisins. After our meal, we decided to get dessert which consisted of Chai Spice Creme Brulee and strangest of all,or at least not commonly heard of, Gajjhar Halwa. This is a dessert described as a “hot and cold love”. 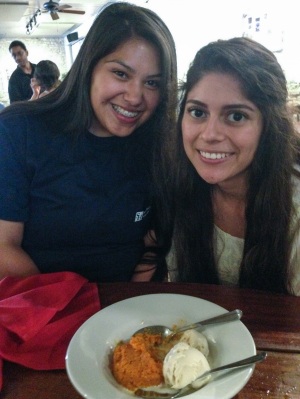 Despite the large lunch, our evening kayaking adventure whetted our appetite for a large dinner, which consisted of Ethiopian food.

Our appetizers were Sambusas, which are pastries filled with onion, green pepper, and beef accompanied by a spicy sauce.

While we waited for our food, we talked about our favorite experiences during our week in Austin. We all had different favorites, but we all agreed that we definitely learned a lot this past week. It was filled with fun and adventure, but also a lot of work and learning time; the best combination!

That learning and fun continued with the arrival of our entrees, presented in a large Ethiopian basket!

Our entrees consisted of the Habesha special meat combo that included Doro Wot, Siga Wot, Kitfo, Yebeg Tibs, Alicha Fitfit, Bozena Shiro, Gomen Besega, Habesha special tibs, and Ayib; thankfully we had a great waiter that could explain each one of these to us! We also ordered from the Poultry menu, the Doro Tibs, chicken breast cubes sautéed with slices of onions, herbs, and sauce. For the least adventurous, we ordered spaghetti with meat sauce. The food really seemed to be authentic Ethiopian food which was a great way to introduce this type of food to us first-timers.

Even as first-timers, we did our best to eat in the Ethiopian tradition, using the injera bread as utensils.  It was great food and a great way to wrap up our adventurous week in Austin.

We headed back to the hotel to pack up and get ready to hit the road the next morning. We were all thankful for the opportunity to intern at the Texas Capitol for the week. We were also thankful to meet extremely helpful people and eat really good food. Until next time, Austin!

One thought on “Au Revoir Austin”