The LEAP Ambassadors don’t always have the pleasure to add new places to the LEAP map, but this year has been different. In the 11 years that LEAP has been a Center, the Ambassadors never traveled to Palo Duro Canyon. But today the Leapsters reached yet another milestone in traveling to the Texas Panhandle.

The alarm clock rang at 5am and we jumped out of bed ready to conquer the exciting day ahead. First stop, Palo Duro Canyon State Park in Canyon, Texas. We had one goal in mind and that was to hike all the way to the famous Lighthouse rock 3 miles one way into the park. Without further ado, we stepped off the van with a backpack full of water and hearts full of motivation. It was exciting for all the Ambassadors and especially so for Bianca and Victoria, as it was their first LEAP hike. 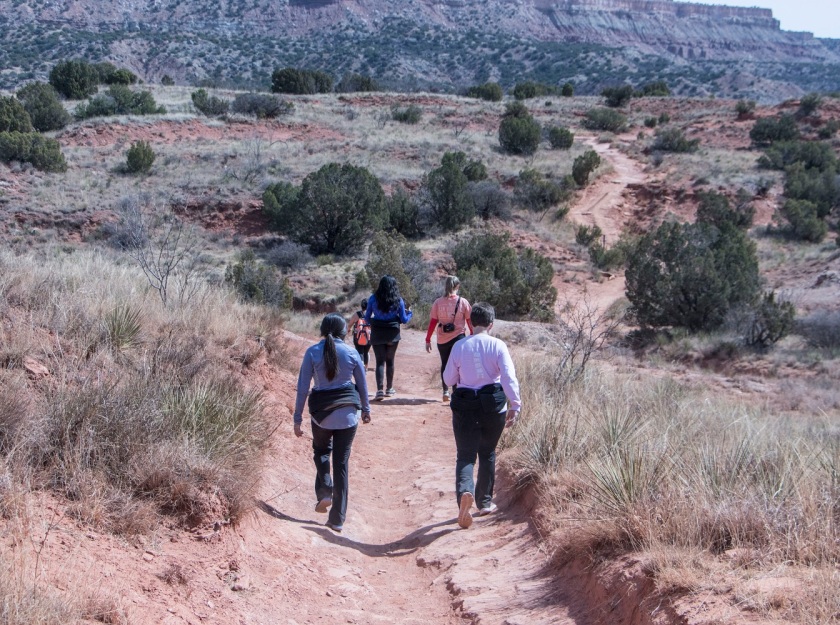 It was a beautiful day to go hiking with clear blue skies and stratified layers of the mountains that kept us in a constant state of awe.

For those who have not been, the first 2.73 miles of the hike is on flat ground, and then the fun starts. 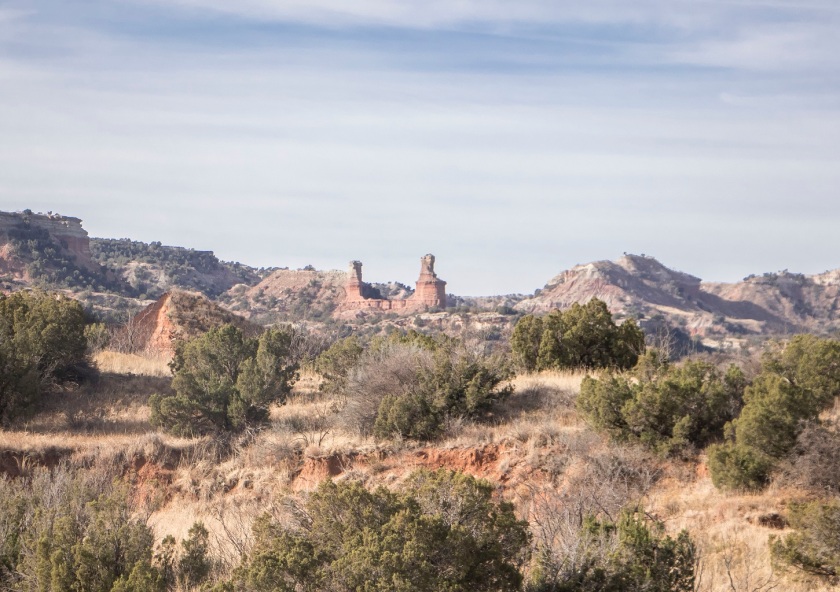 With a steep climb of approximately four-tenths of a mile, hikers get to the base of the “lighthouse.”  It is one of two great columns in the vicinity.  For the adventurous, more climbing is ahead, and we were up for that challenge. 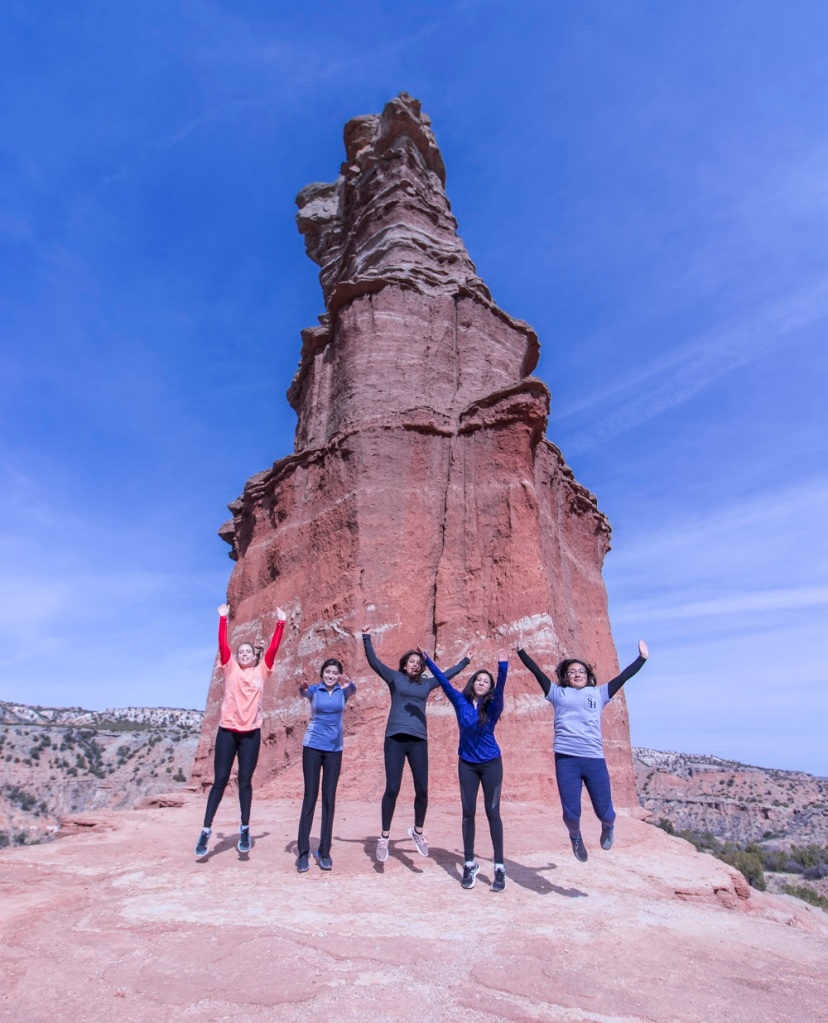 Traveling another quarter mile or so–almost all upward–we made it near the top of the second tall column. 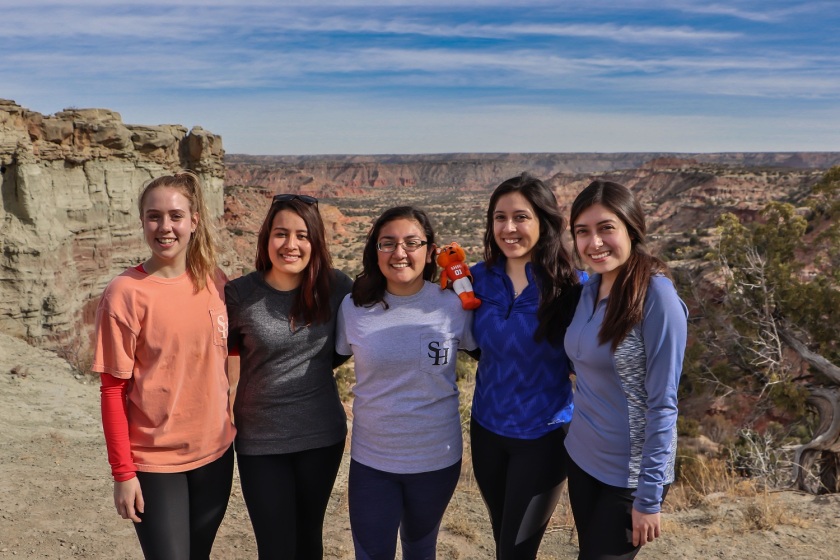 Unlike the lighthouse, this column was bulkier, with an accessible peak.  While we want to go to the highest point, we could not navigate the final 12 feet or so…

…but nonetheless, we were offered spectacular views.

To celebrate the occasion, we decided to take some group pictures and initiate our new members by taking an official “LEAP” photo, which was a lot of fun.

However, the fun was only beginning as we saw even more cool views…

and had about ten times more fun as we slipped and slid down the mountain. 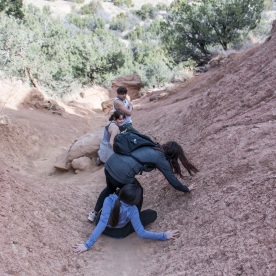 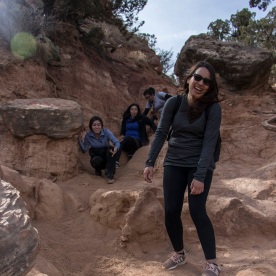 Some of us tried to help our friends, but the attempts weren’t always successful.  However, with some good old-fashioned teamwork we made it all the way down safe and sound. With a last glance at the gorgeous mountains we said goodbye to the Park and headed to West Texas A&M University. 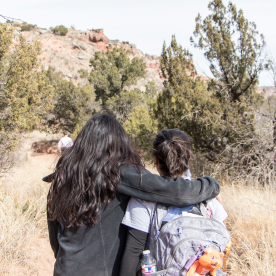 One of the first exhibits we saw was by Charles Franklin Reaugh, who was known as the “Dean of Texas Painters.” Raugh’s own art collection consists of 541 pieces, and, interestingly, one of his paintings at the exhibit called “The Chimneys” (a name that apparently predates “The Lighthouse”) depicts The Lighthouse at Palo Duro Canyon, possibly the first such painting of this intriguing geographic formation. 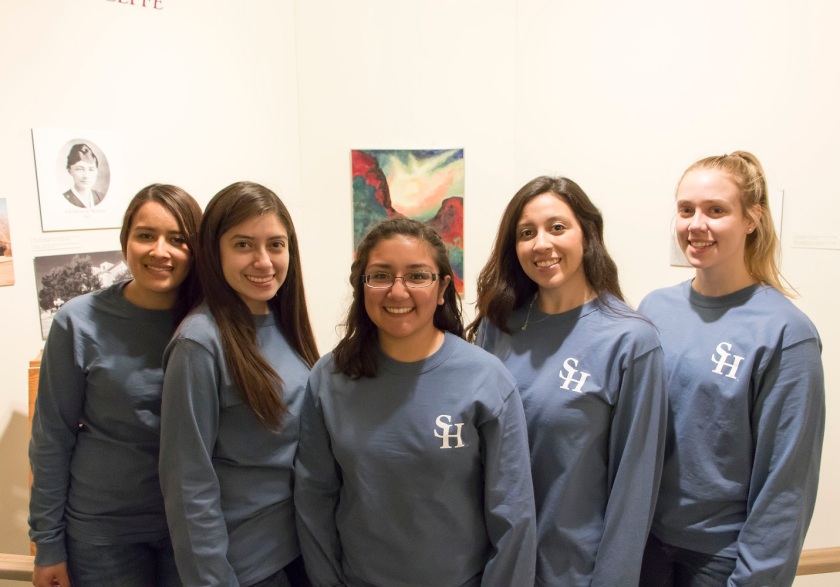 During the late 1910s while she taught at West Texas State Normal College in Canyon (now West Texas A&M University), she dedicated her free time to painting and drawing at the canyon. The O’Keeffe Foundation donated the “Red Landscape” painting to the Panhandle-Plains Historical Museum. This painting is one of the few that resulted from her visits to the canyon.

Besides O’Keefe’s vivid artwork capturing our eyes, two bronze statutes and their connections back to Huntsville did so too. 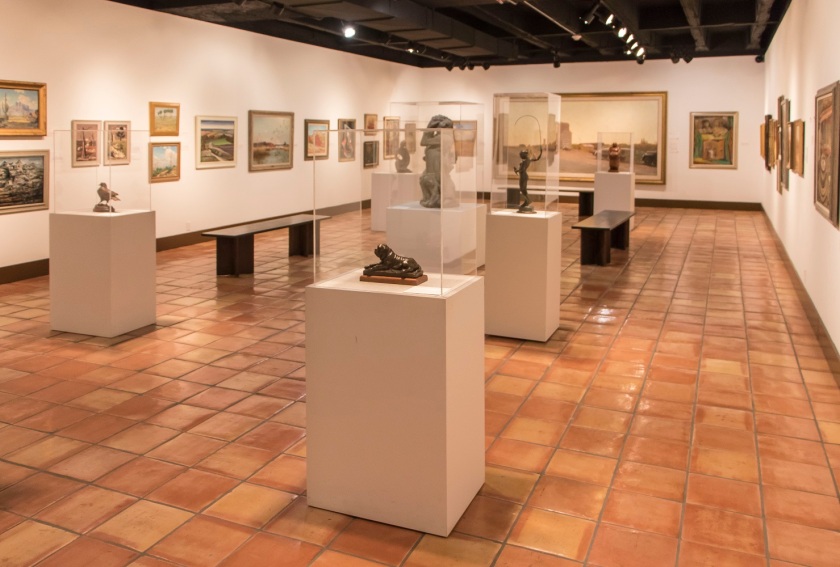 The first was “The First Catch” by the Italian Sculptor Pompeo Coppini, the artist for both Sam Houston’s grave and the Littlefield Fountain on the University of Texas campus in Austin, Texas (in memory of University of Texas’ students and alumni who died in World War I). The other sculpture was by Elisabet Ney. Ney was a pioneer female sculptor who immortalized General Sam Houston by creating a bust that is currently on display in the Ways and Means Committee Room in the US Capitol.

Another interesting tie to our beloved university we found on the description of artist Coreen Mary Spellman’s lithograph, “Norma Gene.” (below) Spellman was one of the founding members of the Texas Printmakers, and she taught at the Texas State College for Women and at Sam Houston State University. 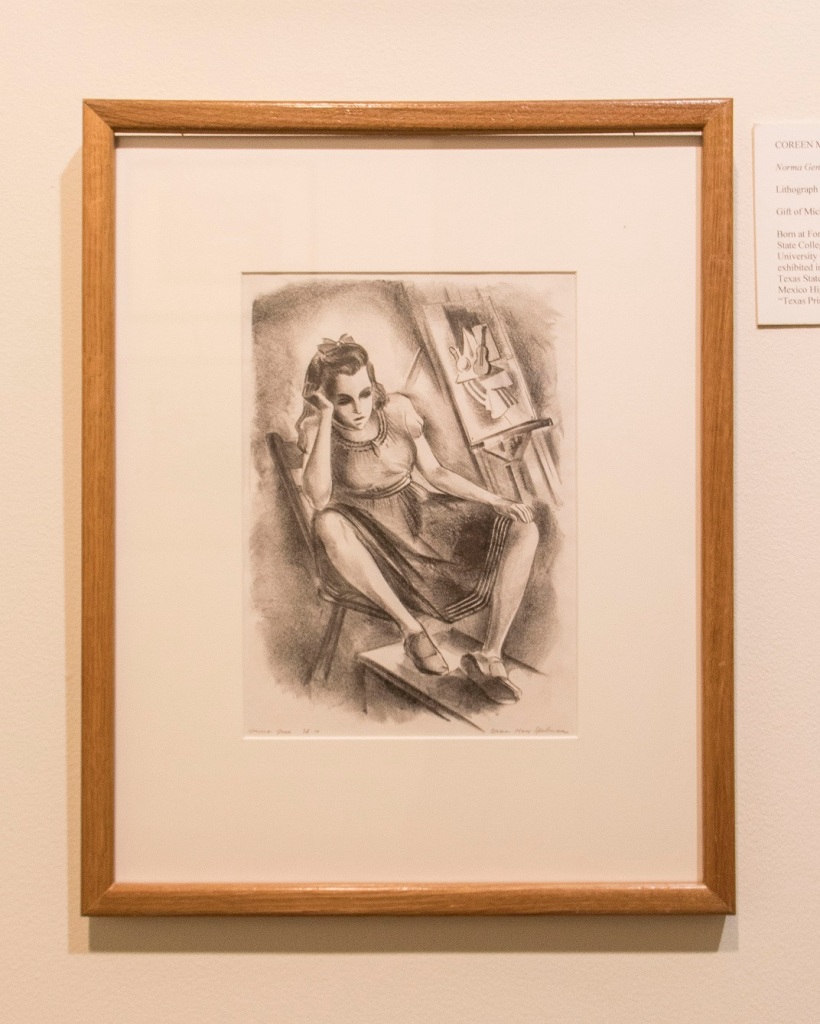 It was amazing to see so many connections to Sam Houston, SHSU, and Huntsville. We would find even more artists with connections to places we’ve been at our next stop: the Amarillo Museum of Art.

We arrived in Amarillo just in time to check out the Amarillo Museum of Art. As we walked in, lo and behold, was none other than a granite piece by one of our favorite sculptors, Jesús Moroles.

He has many pieces scattered throughout the world, but we are proud to have multiple pieces in Huntsville at the Wynne Home Arts Center and have even seen some at the Smithsonian on our trip to Washington!

However, the astounding art pieces did not stop there.  There were many different galleries of art, but the second gallery was—by far—everyone’s favorite. One of the new artists that we learned about is Lino Tagliapietra. He is a glass sculptor that Dale Chihuly refers to as “perhaps the world’s greatest living glass blower.”

Dale Chihuly is one of our favorite glass sculptors, whose art we have seen much in our travels, so we knew it was important to look at Tagliapietra’s work. As it turns out, Chihuly and Tagliapietra worked together on a couple of different glass sculptures. My favorite piece by Chihuly was called the “Blue Persian Set.” The beautiful blue colors were similar to Tagliapietra’s glass set.

The similarities between both sculptors were visible and fun to learn about.

Another new artist we learned about was Tony DeLap. He has mentored James Turrell, an American artist whose art focuses on light and space such as the Skyspace (also found on the University of Texas campus in Austin). DeLap’s piece was an abstract shape of acrylic on aluminum that was an SHSU orange color.

We also learned that DeLap’s work was featured in two exhibitions in the 1960’s that helped define Minimalism.

We also found some other big names, such as Carl Andre, Larry Bell, and  Joseph Albers…

Our day was filled with lots of fun art and connections that we never imagined finding, but our next stop was only going to be better because it was finally our turn to participate in art making.

There’s nothing more mind-boggling than seeing ten Cadillacs, half buried nose-down in the dirt, covered from top to bottom in graffiti, as you drive along Route 66. Does Amarillo have a prominent population of graffiti artists? Yes and no. You see, Cadillac Ranch was invented by a group of art hippies, called The Ant Farm, who were hired by Amarillo billionaire, Stanley Marsh III. Marsh contracted with The Ant Farm in an attempt to build a public piece of art that would be unlike any other, unique to Amarillo.

Facing west in a line, supposedly angled the same as the Great Pyramid of Giza, the Cadillacs from the 1949 Club Sedan to the 1963 Sedan de Ville stand proudly with their colorful décor waiting patiently for the next person to make their temporary mark on it. And that is exactly what the LEAP Ambassadors did. 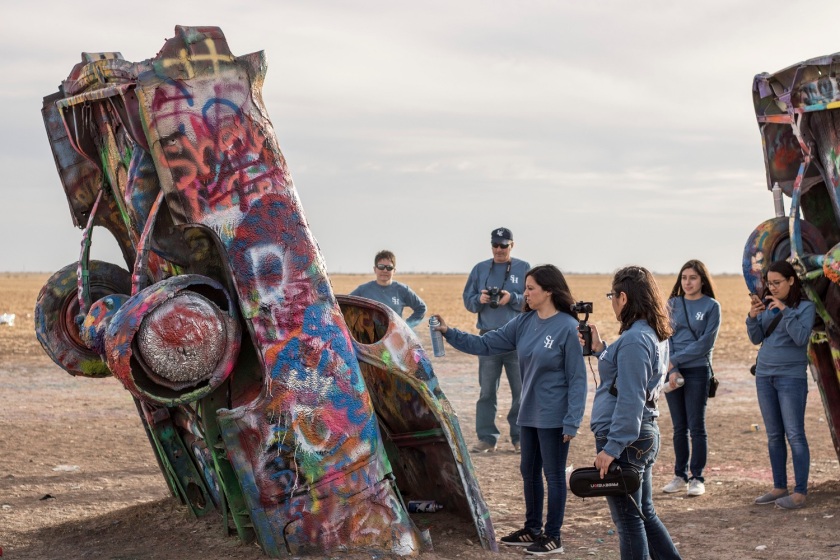 LEAP is known for its focus on learning, but what we didn’t imagine was that we would learn how to become graffiti artists as well. 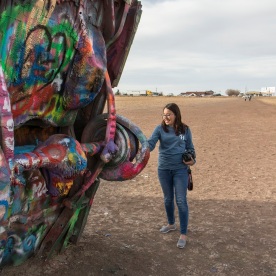 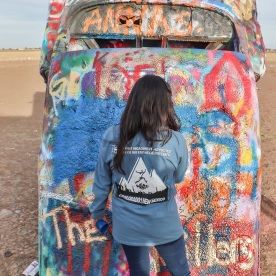 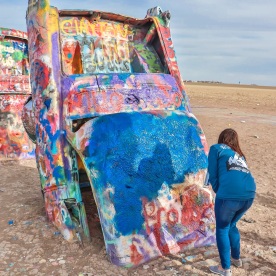 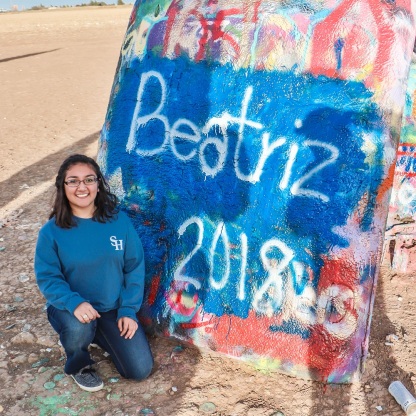 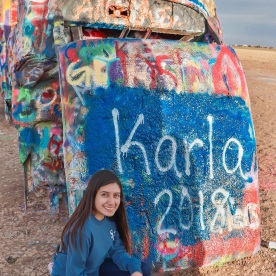 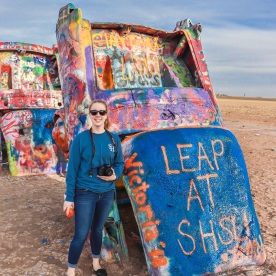 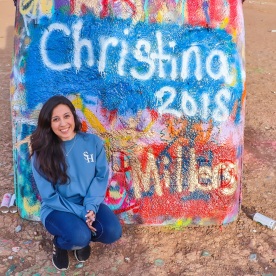 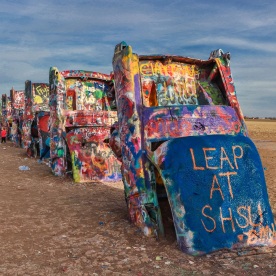 …and we LEAPed in delight at having done such a great job.

Soon after, we got back on the road, headed to Denver, where we would be attending the American Society for Public Administration 2018 Annual Conference.