As we arrived at the United States Supreme Court, we were all anxious to see and learn what we could about the judicial branch first-hand. The classical Corinthian-style architecture by Cass Gilbert was structured in such a way that would seamlessly blend in with its neighboring congressional buildings, without diminishing its impressive nature.

It certainly depicted the epitome of American and legal themes by displaying the famous phrase “Equal Justice Under Law”. Inside the “Temple of Justice”, we were greeted by a large statue of the fourth Chief Justice, John Marshall as we walked down the Great Hall. The statue was sculpted by William Wetmore Story in 1883 and was originally placed at the U.S. Capitol, before moving it to the Great Hall in the Supreme Court.

There were various exhibits showcasing the history of the Supreme Court building as well as the Justices that have served within it. One of my favorite exhibits was dedicated to Justice Sandra O’Connor.  She was appointed by President Reagan in 1981 becoming the first woman to be appointed in the U.S. Supreme Court. She was a fellow Texan.  After she retired, she was awarded the Presidential Medal of Freedom by former President Obama for her work. The exhibit displayed her original chair and a beautiful portrait of her. 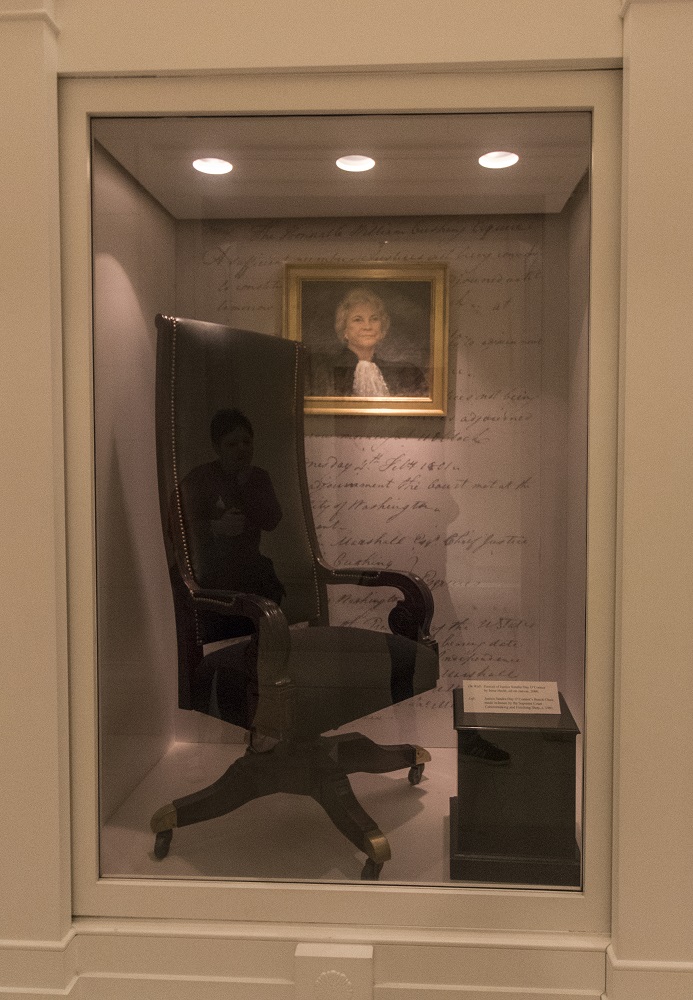 After a quick glance at the other exhibits, we ran upstairs to get a seat in the Courtroom to hear a lecture on the procedures, architecture, history, and art. Security is very tight within the Courtroom. Reporters and photographers go old-school with regular paper and pen. The audience will line up hours in advance to get to listen in on the hearings. Once inside, there are several options ranging from being able to listen to the entire thing to only staying 3-5 minutes at a time. However, I do not understand why anyone would want to stay for so little time after being surrounded by the expensive, yet beautiful Italian marble columns within the Courtroom. Or by being watched by all the important historical figures that advanced the evolution of law throughout time.

Our next stop took us outside the city and into the country side! We rented an SUV and drove into Virginia to see Frank Lloyd Wright’s Pope-Leighey Home and Thomas Jefferson’s Monticello.

Our first venture to the Pope-Leighey Home was exciting! Frank Lloyd Wright, an architect known for his modern designs and cohesion with nature, designed and built more than 500 hundred homes throughout the United States. Each home was unique and distinctive from the rest. 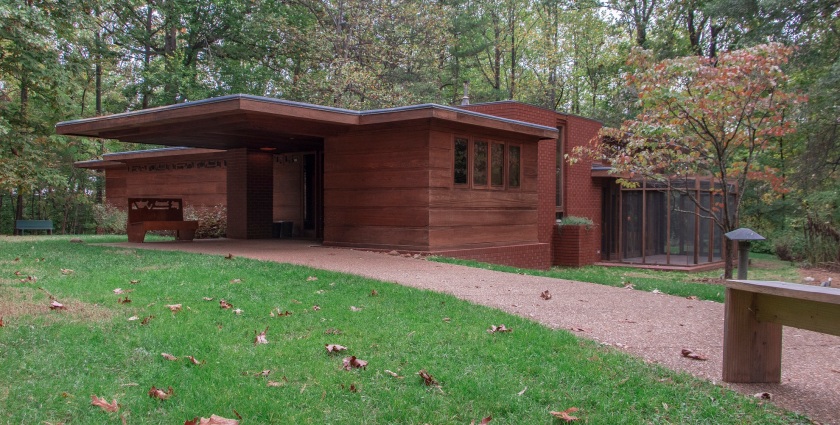 In 1939, Loren Pope commissioned Frank Lloyd Wright to design and build a home in the rolling hills of the Virginia/D.C. border. Wright built Usonian homes, which was his attempt to build affordable homes designed for modern families and built to be environmentally responsive. The result was a small, artful home perfect for the Popes…. until they had three small children in a 1,200-sq. foot home!

After 5 years, the Pope family sold their home to the Leighey family. Upon Mr. Leighey’s death, Mrs. Leighey donated the home for tours and preservation to the National Trust for Historic Preservation which allows visitors like us to learn about Frank Lloyd Wright each year.

The home itself is designed to not distract from nature. Not very tall, the home creates horizontal lines on the outside with the arrangement of the wooden paneling and the brick alignment. It was interesting to learn about the natural elements of the home that really draw guests in from the outside.

We learned about Frank Lloyd Wright’s signature compression and expansion where he used small spaces, such as hallways to introduce visitors to a large, grand room. Although, the room wasn’t huge, the effect was the same because of the previous small space visitors just stepped out of. Additionally, the Pope-Leighey home showcased a lot of natural light. The windows and doors made the home flow right into nature. 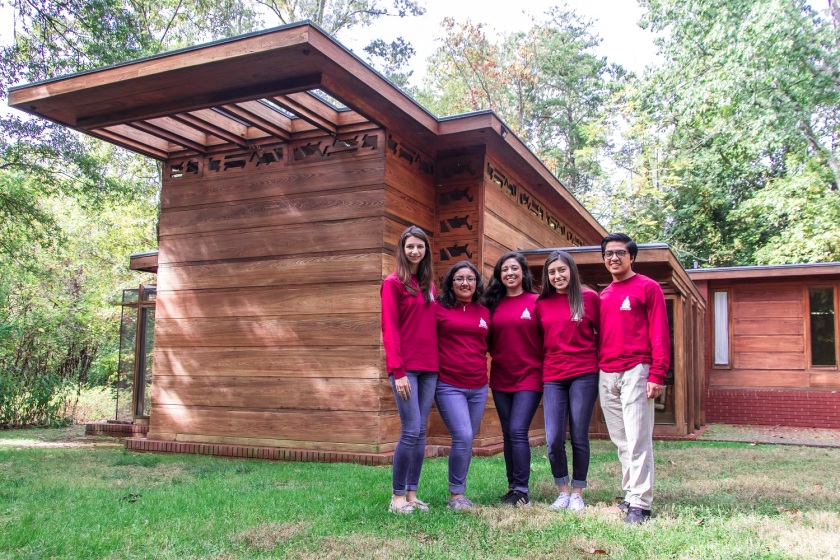 Although the LEAP ambassadors were enthusiastic to add another state to their travel map, we were also excited in adding new restaurants to their list. For lunch we stopped in Alexandria, Virginia the downtown square to sample the cuisine at The Wharf. The Wharf is a nautically themed restaurant with a lot of character. The building was built in 1790 and had been known as The Miller Company which imported crockery, and china. It became The Wharf in 1997. Today, the restaurant still has original brick and even nails from the original building. The Ambassadors always like to try new foods so today Beatriz tried her first salmon sandwich and Mayor Woodward ordered a fried fish sandwich. It was lunch full of good food and great conversations. 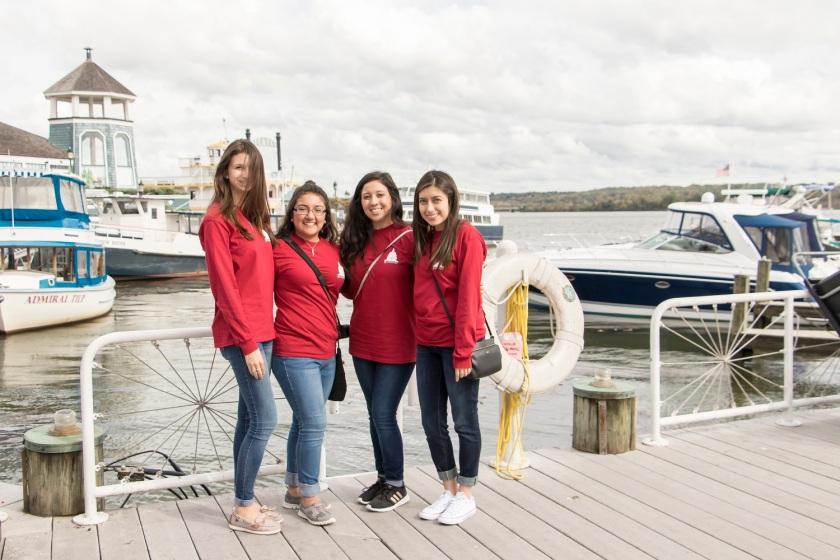 From one marvel of architecture we moved to another in Charlottesville, Virginia. Thomas Jefferson designed his treasured home of Monticello and began construction in 1769. 248 years later, the home still stands with the grandeur Jefferson set out to conceive.

Upon entering the grand home, we were welcomed by some of Jefferson’s most impressive artifacts and innovations. For example, above his door hung a clock that worked through a pulley system brought down by cannon balls. On one wall were his “gifts of friendship” (Native American artifacts that were given to Lewis and Clark during their expedition) and displayed on another wall were mastodon fossils that he once laid out inside the rooms of The President’s House.

Quickly on the tour, we learned that this Founding Father was not only the political genius that crafted the Declaration of Independence, but was one of the greatest minds of his time. While we explored his library, we were told by our tour guide of the intense assortment of literature (over 6,000 books) once owned by Jefferson. Even more impressive, was one Don Quixote book that stood by a Spanish grammar book on his shelf. These books were both owned by Mr. Jefferson and were his tool to learn Spanish, one of six other languages in which he was proficient.

Jefferson, of course, not only excelled in languages, but was also a prodigy in architecture. Among other things, Jefferson envisioned that every space in his home serve its maximum purpose.

Every room in Monticello was adorned and designed for an already conceived purpose. In his parlor room, for example, he hung portraits of American heroes (him included) to remind his guests of the nation’s history. As another example, the walls in his dining room were painted with some of the finest oil based yellow paints, to demonstrate the wealth that he possessed. For me, there was no need to go to such choice in colors to show off his wealth. The grandeur of his home, the artifacts inside it, and the stories held within were proof to this Renaissance man’s intellectual wealth.

Following the Monticello indoor tour (where photography was prohibited), we had a chance to roam the exterior, taking photos and seeing the grounds.  We noted that Monticello is featured on the back of the nickell…

…of course, we also took an obligatory LEAPing photo… 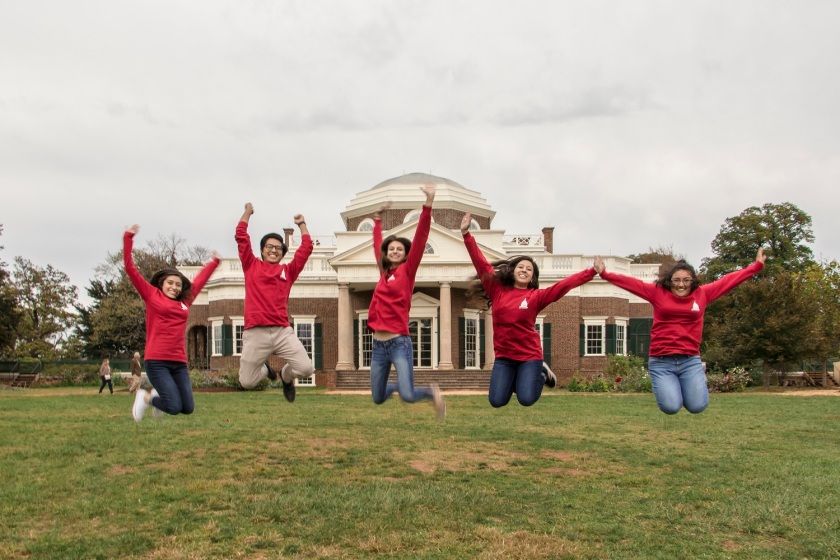 …and we also noted that you can see one of Jefferson’s other designs–the University of Virginia–from his home.

A chief principle that Jefferson believed was necessary to preserve democracy was to educate the public. This principle was so dear to him that he set out to establish and design the University of Virginia. After we left Monticello, we dropped by the beautiful UVA campus to admire these Jeffersonian structures. 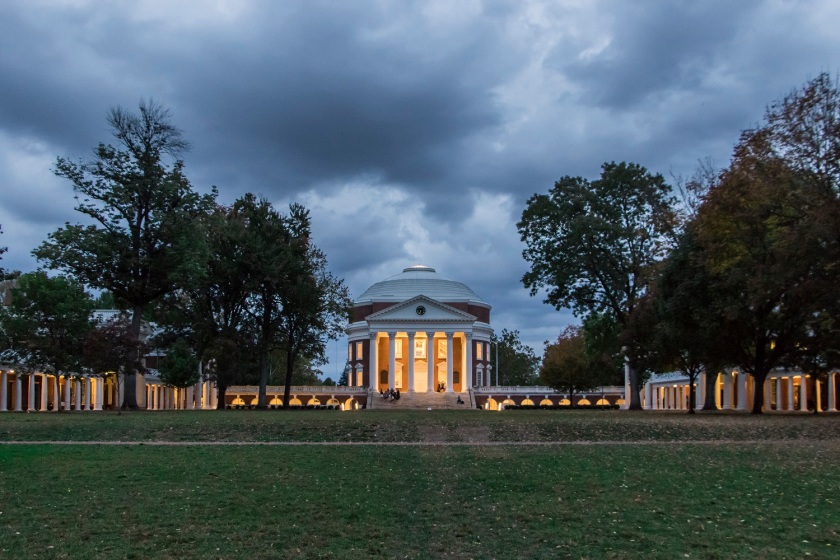 One of the grandest of Jeffersonian buildings on campus is the Rotunda. Located at The Lawn of the campus, this grand building sits on top of the hill with student dorms standing on the sides of the pathway that leads towards The Rotunda. On the way up the hill, we were so impressed by the dorms that we decided to peek inside.

Well, we gave ourselves a brief tour of the rooms, but the grandeur at the top of the hill kept calling us. When we got there, we found out that the doors were locked, however that didn’t stop us from giving a look inside through the windows and other cracks in the building.

Enjoying every minute of the campus, we quickly lost sense of time. Before we knew it, it was time to head for dinner.

Before leaving the great state of Virginia we headed to a local burger bar called “Citizen Burger Bar.” The restaurant’s motto is “A delicious burger is your right. Perhaps even your responsibility.” Of course, we had to exercise our rights to a good burger, so we ordered some of the best things on the menu. We started our meal with onion rings, which just kept coming so we had plenty of them! Kaitlyn, our mushroom lover, ordered the Wild Mushroom and Swiss burger and Beatriz ordered a grilled cheese sandwich with slices of apples inside! During dinner, everyone shared their favorite events of the day.  Then, we headed back to DC to prepare for a White House Tour in the morning.

Volunteers from the LEAP Ambassadors assist the WCRP with the Reagan Dinner, where they met an impressive array of community leaders. Read about their experience here: https://leapatshsu.com/2021/05/12/reagan-dinner-2021/