Our last day in Washington started out with once-in-a-lifetime opportunity. Our first stop was none other than the home of the president of the United States, and many other presidents before him.

Our self-guided tour began at the East Wing, its long corridors adorned with pictures of our nation’s presidents…. 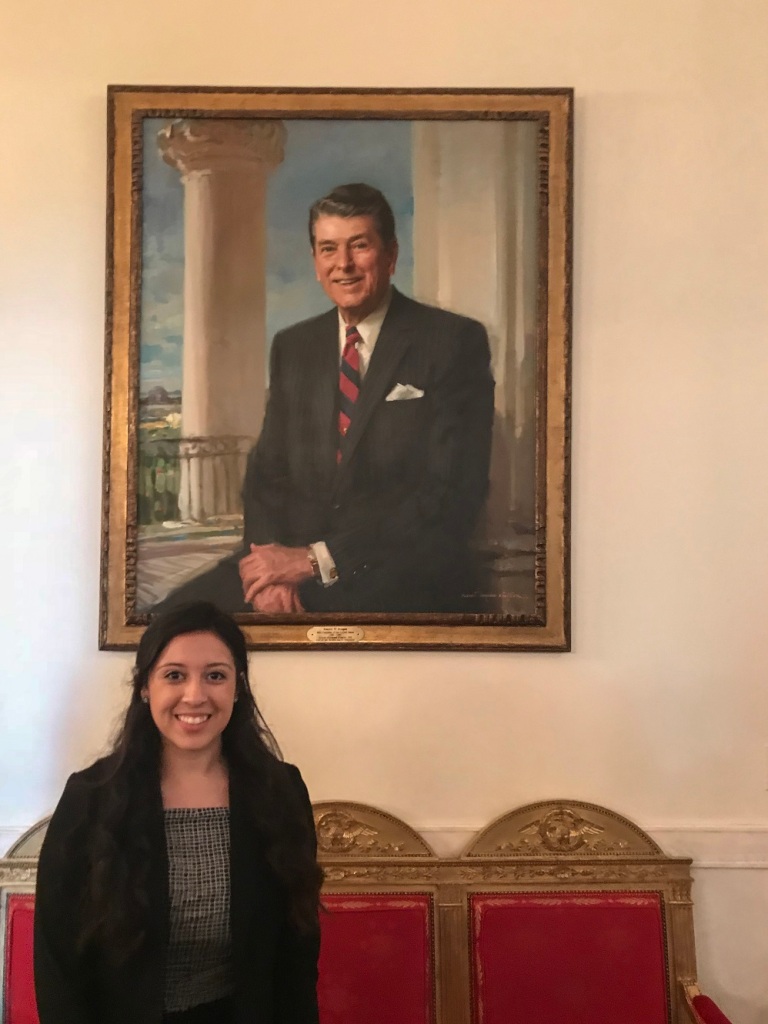 …and other important figures that had also visited such as Princess Diana and John Travolta.

During our first few minutes of exploration, we saw the iconic view depicting the South entrance, often found in movies. The spectacular sights continued in the rooms located on the ground floor. Every room housed its own historical story. One after another, we got to view various treasured artifacts such as the 55,000 volumes of literature in the Library, also used for countless presidential tea meetings since President Fillmore in 1850.

The Grand Ball Room was, as the name suggests, the most grand, with three crystalline chandeliers and gold décor from top to bottom. 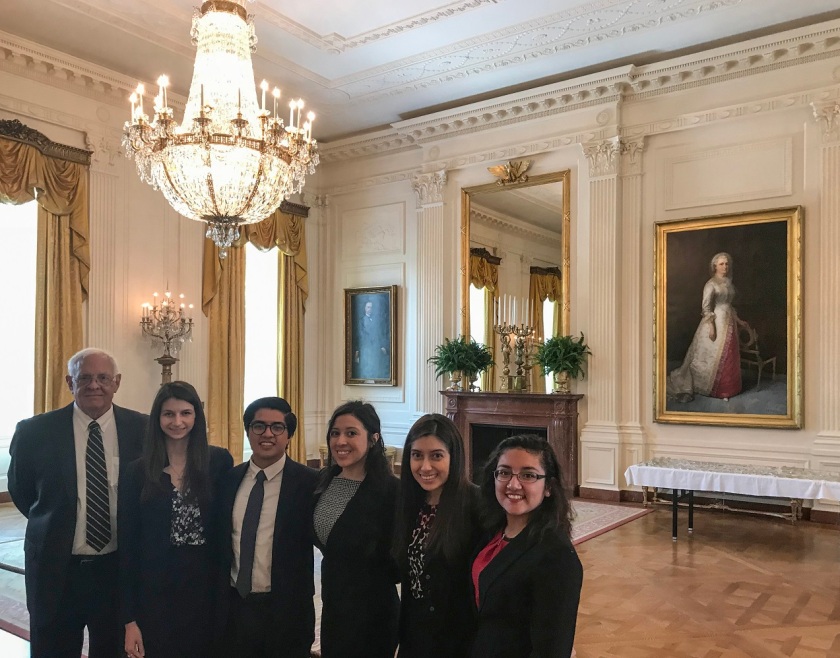 It is commonly used for special events, such as the marriage of Theodore Roosevelt’s daughter, Alice. We were also able to see something that not many people get to see, the cleaning of the chandeliers. Glass piece by glass piece, White House maintenance workers meticulously and carefully disassembled and wiped clean the 6000 pieces of glass. Their work was imperative for the White House’s illustrious look.

We forged ahead and had the chance to view some very recognizable rooms: the famous Green, Blue, Yellow, and Red Rooms. Used by the President and First Lady for special receptions over the years, these rooms were all themed in the color and time period of the president’s choice. Throughout these rooms we were also drawn to the displayed art, much of which, to our surprise, we recognized. Among the most notable were works of art by Jacob Lawrence, Henry Ossawa Tanner, and Winslow Homer. Even though we saw a small portion of The White House, the experience of visiting the nation’s most celebrated home will be forever ingrained in our memories. 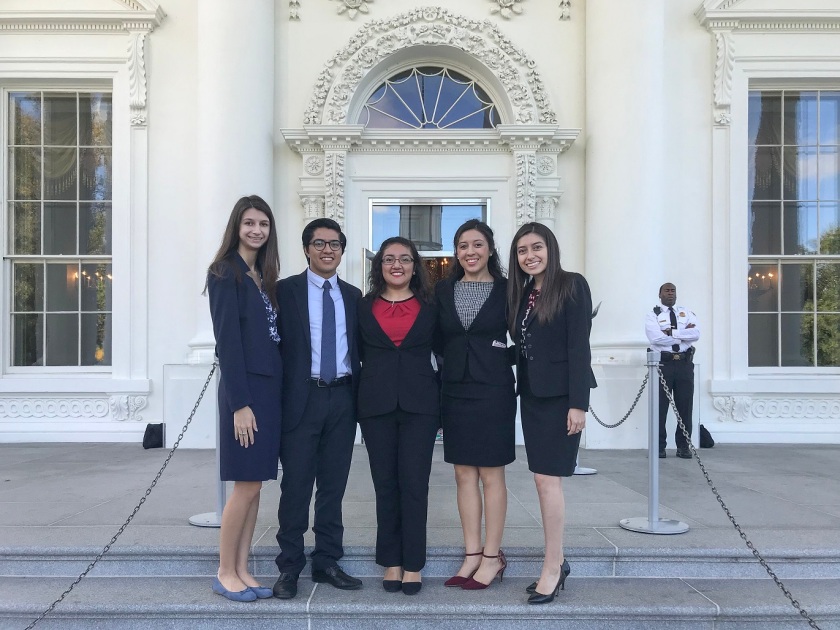 After an exciting tour of the White House, we were anxious to learn about the legislative branch of our government. 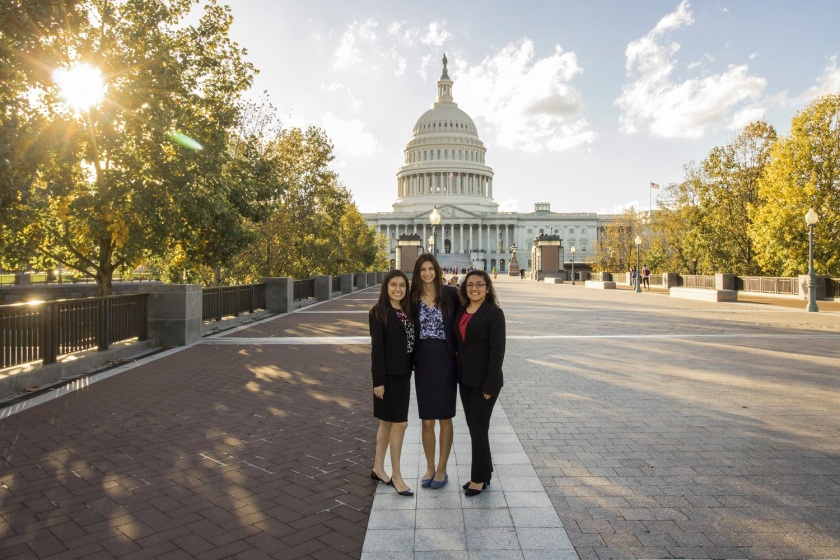 Without wasting any time, we rushed over to Congressman Brady’s office, which had kindly prepared a guided tour for us. We received a warm welcome by his staff and given a small tour of his Capitol office. Surprisingly, members are allowed to paint their office any color they would like. Congressman Brady decided to paint his office and the Appropriations Committee room one specific shade of blue named “Brady Blue”.  His press secretary, Allyson, gave us a clear overview of what her job entails which was helpful for us since we also manage social media sites.

Spencer, an intern from Texas Tech, then took us to explore the Capitol while Brian and Christina stayed behind to work. One of the less seen Capitol treasures is an underground tunnel decorated with art pieces by students from all over the country, the Wall of Art. Every year, each member picks their favorite piece from an art contest hosted in every district, eliciting thousands of submissions. Congressman Brady is a well-known baseball fan, so it was easy to spot his pick among the various masterpieces. From there we made our way to the Brady Blue colored Ways and Means Committee Room where the unveiling would take place in a couple of hours. Next, we marveled at the collection of statues in the statuary hall, which used to be the old House Chamber.

Each state can donate two statues, but due to limited space, only one statue is placed in this hall, ours being Sam Houston. The other Texas statue was that of Stephen F. Austin. Most statues can be described as “larger than life” (such as our Huntsville’s Sam Houston statue), however these statues were quite the opposite. They were exactly the same size as the real person.

Our anticipation built as with every step we got closer to the famous rotunda. The grandeur and beauty of the dome did not disappoint!

Awestruck, we marveled at the amount of detail and artwork, from the meticulous flooring, massive murals on each wall, intricate friezes, to the dome fresco. Painted by Constantino Brumidi, The Apotheosis of Washington (the dome fresco) was inspired by the founding of the United States. George Washington majestically sits in the middle, lifted by thirteen angels who represent the thirteen original colonies.

Below the fresco and bordering the entire dome is a frieze, a painting which was carved to give the illusion of stone, depicting the history of America beginning with Columbus’ landing and the birth of modern aviation. Brumidi, was also the artist and designer behind the frieze, but he unfortunately died before completing the project. Filippo Costaggini completed the artwork after Brumidi’s passing. The dome captured the splendor and elegance of the capitol. Pictures do not do the rotunda justice. We highly recommend visiting yourself!

The Crypt, named for its resemblance to chapels and tombs, was our next stop in the tour. Originally created with the intent of being George Washington’s tomb, it stands as a memory though it remains empty.  It is lined with a series of impressive statues, including statues of Robert E. Lee, George Washington….

…Nathaniel Greene, and an exhausted Abraham Lincoln. Additionally, the Lincoln sculpture was missing its left ear. There are three theories behind the missing ear: 1) Lincoln listened to the North in the Civil War 2) Lincoln was assassinated before he finished his presidency, so the statue remains unfinished and 3) the sculptor accidentally chipped the left ear off and didn’t fix it.  The first of these was offered by 19th-century southerners.

Then we headed to the Old Senate Rotunda where the original Senate Rotunda was located. It was adorned with a beautiful chandelier and a plaque commemorating the place where the first telegraph was sent by Samuel Morse.

Our last stop was an exciting trip to the House Gallery! The House was in session and debating a bill. Unfortunately, visitors were not allowed to take cameras or even phones into the gallery. But we did get to hear debate and were surprised to learn that most members don’t sit on the House Floor, instead watching it in their office until they cast a vote. With that last view of the House Chamber we concluded our tour. Many thanks to Spencer for the memorable tour!

Library of Congress by Beatriz Martinez

Once our tour was done, we grabbed a quick bite to eat. Our day was far from over and we needed to refuel before going to one of the most impressive institutions in Washington DC, (in my opinion), the Library of Congress. 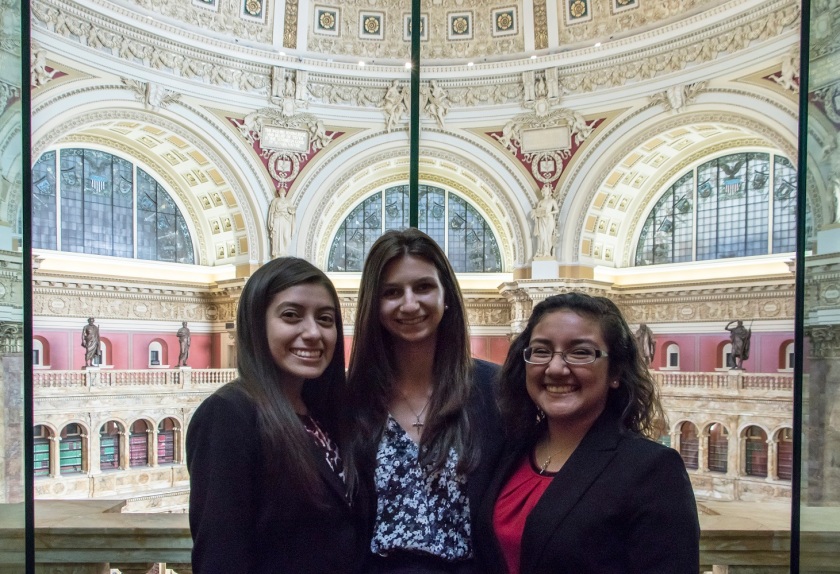 Built in the 1800s, it is one of the oldest federal institutions of our nation, with more than 164 million items, ranging from books, film, moving images, sound recordings, music, and so much more. Artfully designed, the Library spans across three different buildings, all of which are decorated with various mosaic art, colored glass windows, statuesque pillars, and murals.

It is such an intricately designed building that it is almost impossible to describe its beauty and splendor. A LEAP favorite in the Library was the Thomas Jefferson library which contains 6,487 of Thomas Jefferson’s books. 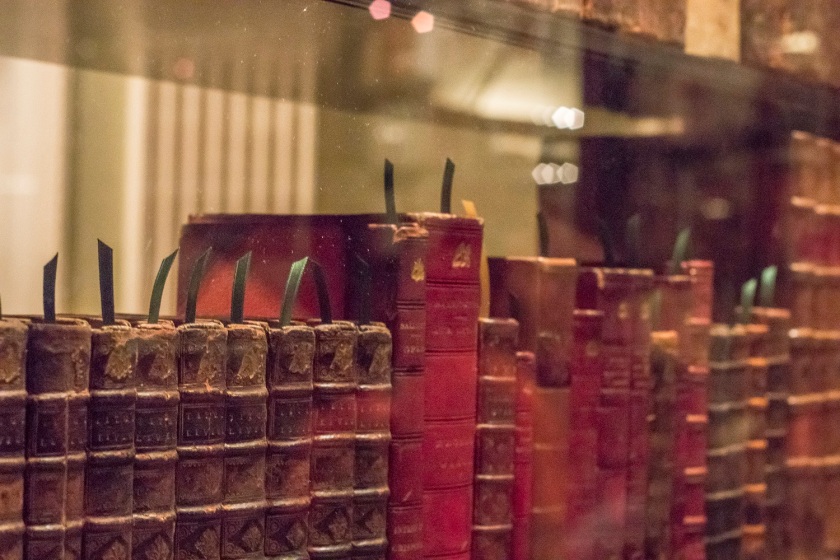 Some were recreated, but most of them were from his original personal library. It was great to see another legacy Thomas Jefferson had left us. 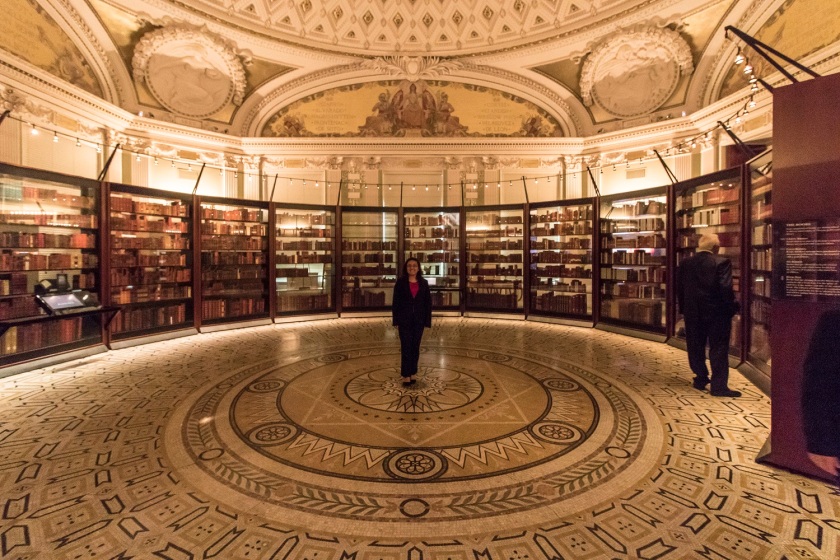 After making a couple of rounds, we headed to the two other exhibits that were being displayed. The first was of Bob Hope. 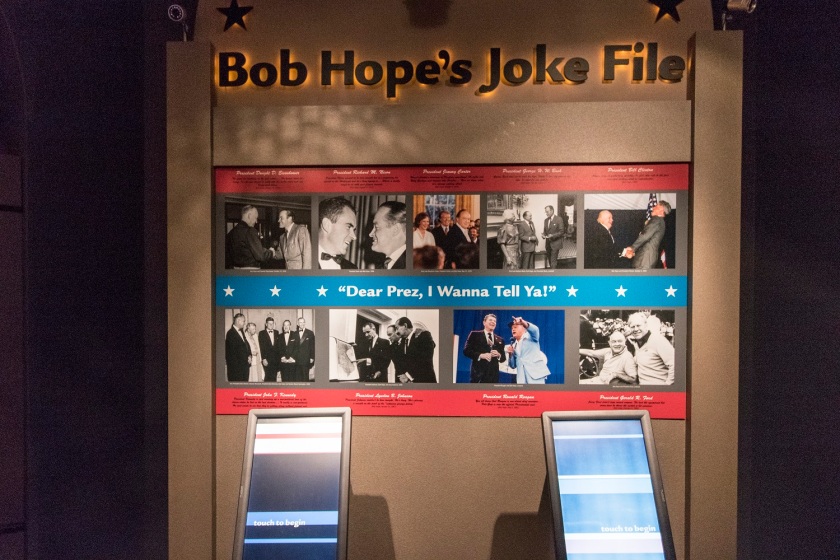 There were many types of media that showcased his life and his humor. He ranged through multiple comedic entertainment ranging from film, radio, TV, and even did some comedic political critiques. Next was an exhibit of Courtroom Sketch Art, from famous court cases such as that of Michael Jackson, OJ Simpson, and Charles Manson to name a few. 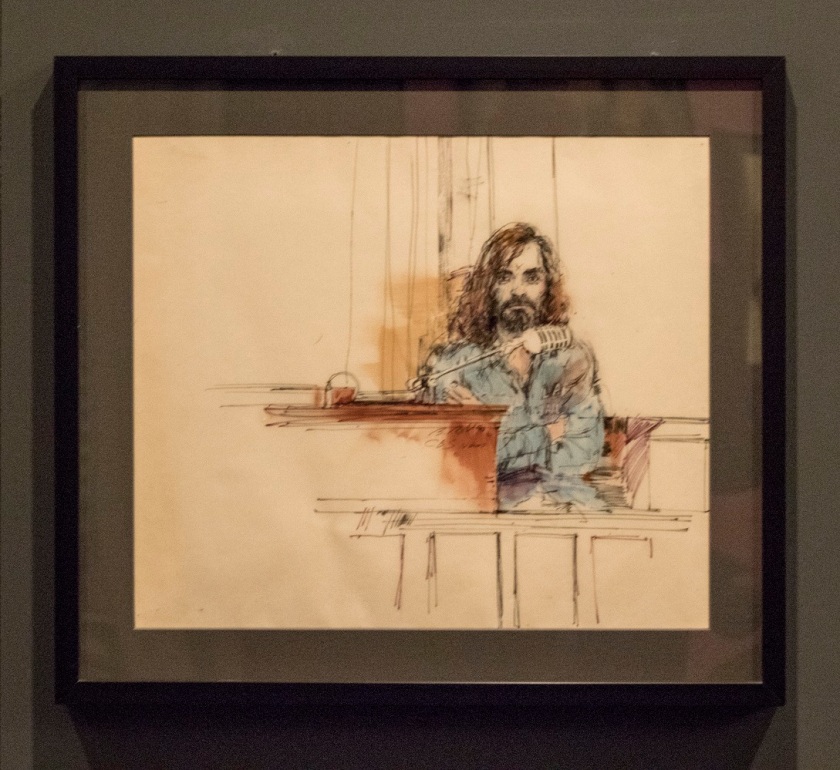 After we finished looking at the different sketches, we shopped at the gift shop and headed out to meet Brian and Christina to be let back in into the Capitol for the Sam Houston bust unveiling.

Working at the Brady Office by Brian Aldaco

Meanwhile, while the rest of the group received a tour of the Capitol Building, Christina and I stayed to experience the work of the D.C office. As interns of Congressman Brady’s district office in Conroe, this was a great chance to experience the work involved at our nation’s Capitol. With much enthusiasm, we completed various tasks and helped around the office. The time in the office was a great experience and we are thankful that Congressman Brady’s staff were so eager to teach us as much as possible about their office.

The moment finally arrived for the unveiling of the Samuel Houston bust! The delicious scent of a true Texas cuisine, barbeque, guided us to the reception room where everyone was gathered.

In one corner of the room stood a picture of the bust, which was promptly being signed by everyone in attendance. 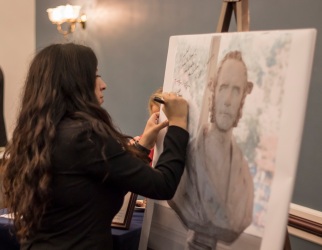 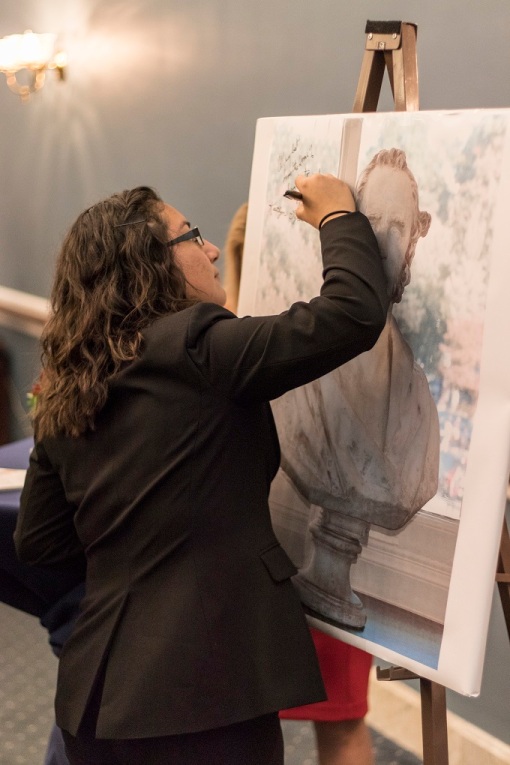 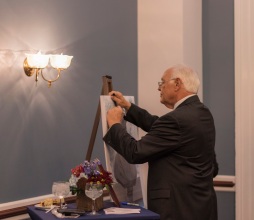 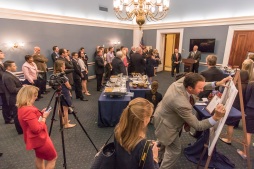 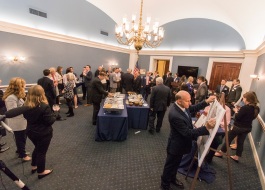 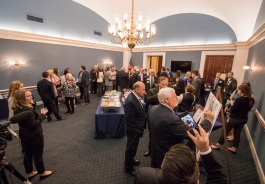 Standing nearby was Kellie Meyer, the Multimedia Journalist for Gray Washington News Bureau, who was interviewing Mayor Mac Woodward, the Director of the Sam Houston Memorial Museum and one of the key people of the event.  She also interviewed Brian Aldaco who currently interns for Congressman Brady’s Conroe office and whose interview we saw later that night! 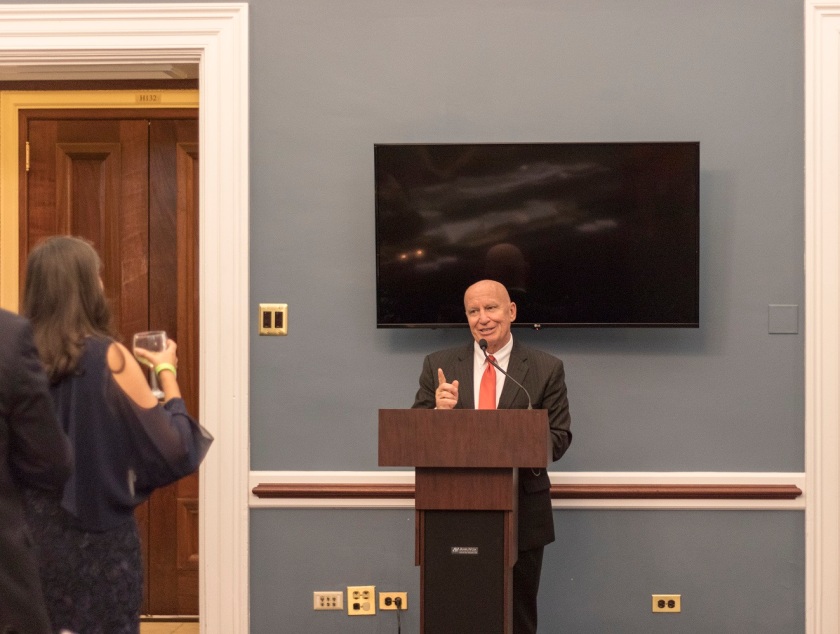 Then Mayor Woodward said a few words, including Sam Houston’s long-awaited return to DC after 158 years since he served as US senator. 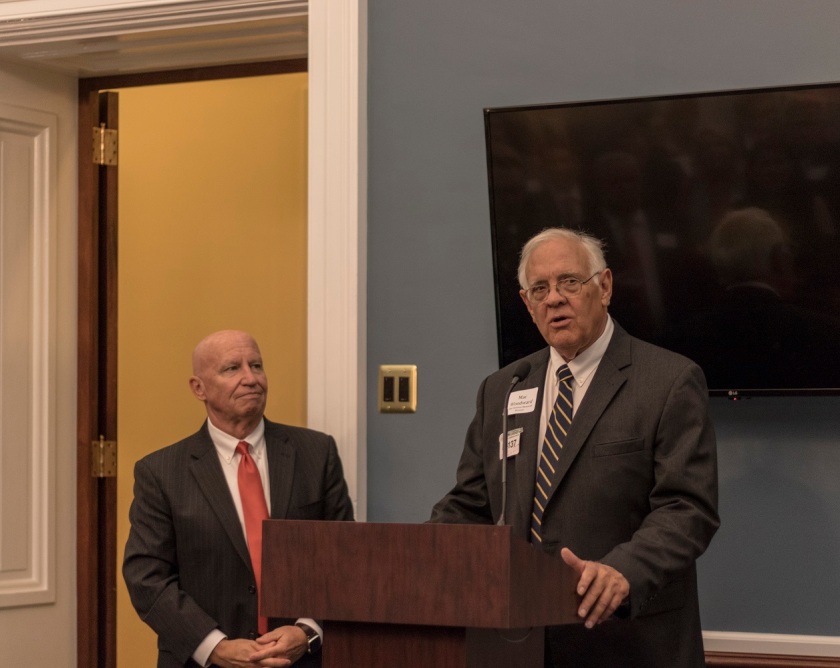 Congressman Brady invited everyone to join him upstairs to see the beautiful bust.

The Bust of Sam Houston… 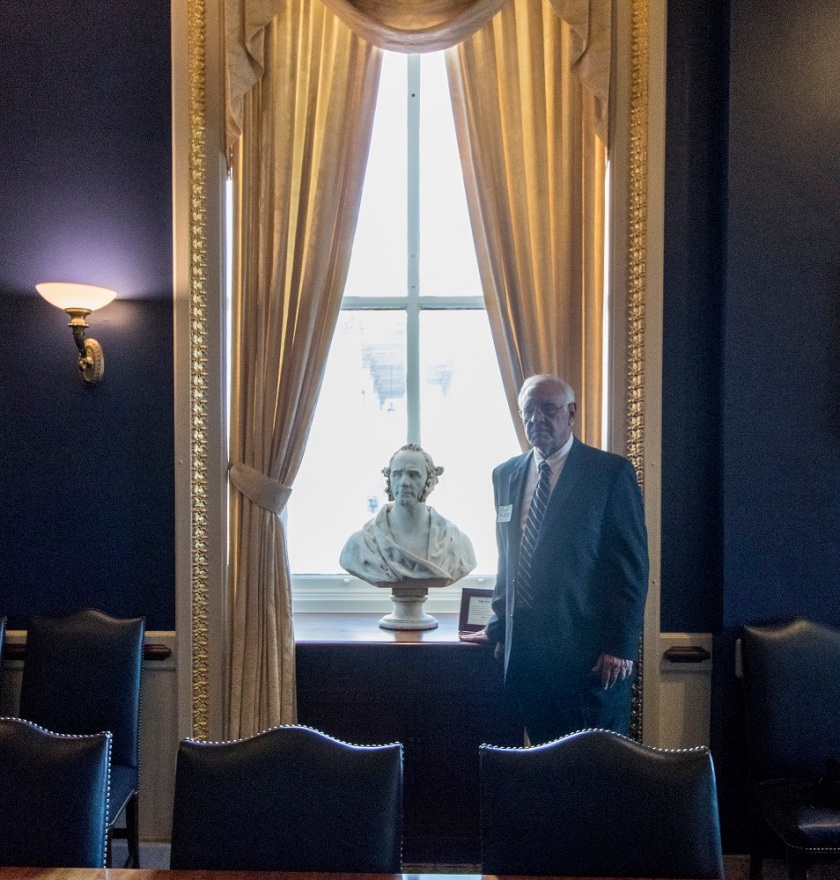 …fits well with the Ways and Means Committee Room, which also houses a statue of Winston Churchill. 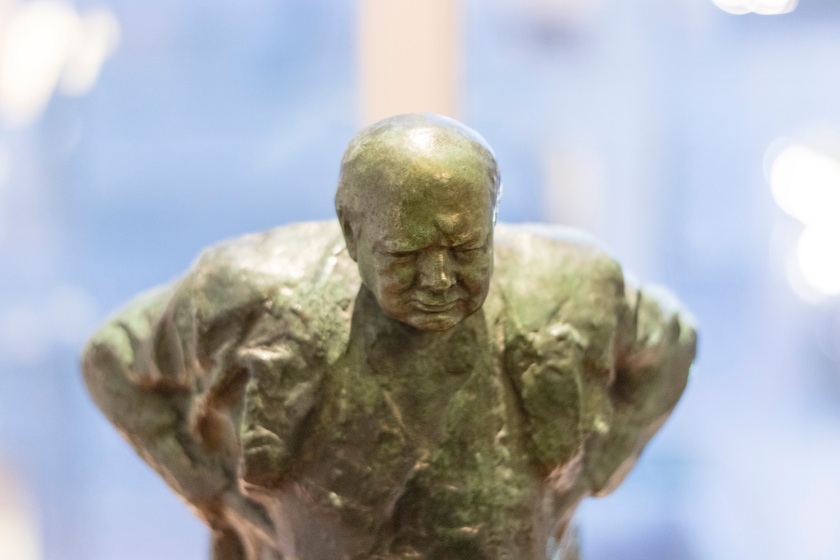 We enjoyed our time in this special place… 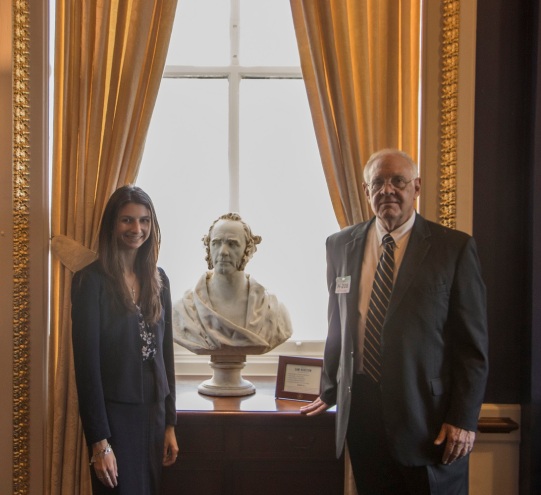 As the night ended, we were thankful not only to have spent time with congressional and local figures but also knowing that Sam Houston’s legacy will live on.