After a few interesting days at Indiana Dunes National Park, LEAP students set out for Chicago and Madison, with the hopes of making the most of a travel day.

One of our first stops was in a suburb of Chicago: Homewood, IL.  This clean, pleasant little town is home to many of the murals of Richard Haas, well known for his trompe l’oeil style.  Trompe l’oeil is a French term that translates to “deceive the eye,” and this art style uses optical illusion to create realistic images. These murals often appear three-dimensional, as your eyes are tricked into falling for the illusion. We were fortunate enough to see five on our drive through town.

The first mural depicted the Homewood movie theater. Upcoming films included classics such Gone With the Wind and Citizen Kane, a film we had studied through our work in the LEAP Center. 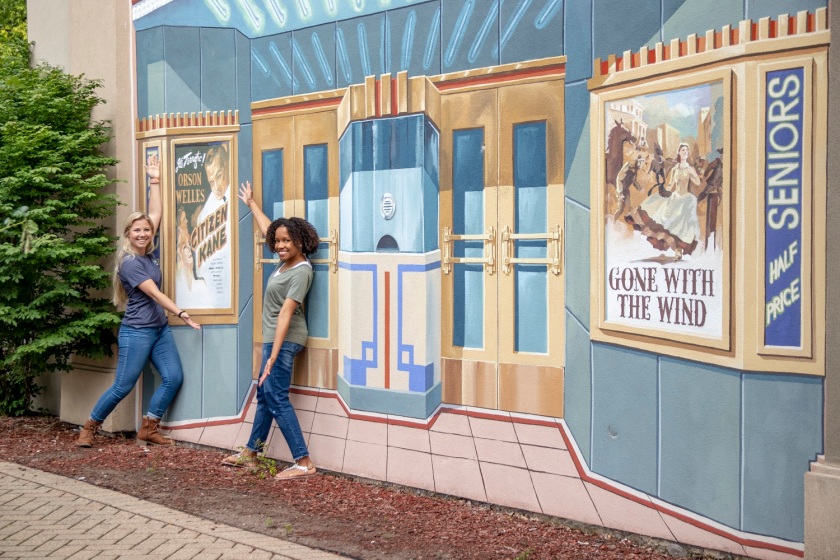 We saw Haas’s signage across numerous storefronts, real and faux, while also seeing the originators of these murals in the form of “movie credits.”

Reviewing the work was fun, particularly since our adopted hometown of Huntsville, Texas, has the most external Haas murals of any city in the world.

Once we made it to the Windy City, we realized that it should have been nicknamed the Foggy City instead. A dense layer of fog hung low in the sky, depressingly hiding most of the city’s varied architecture.

To tie our trip from Homewood to Chicago, one of our first stops was to discover another Richard Haas mural – on the side of the LaSalle Towers Apartments. This mural depicts realistic windows that scale the entire side of the building. The painting  was so good as to made it hard to recognize that the window was not a part of the building. 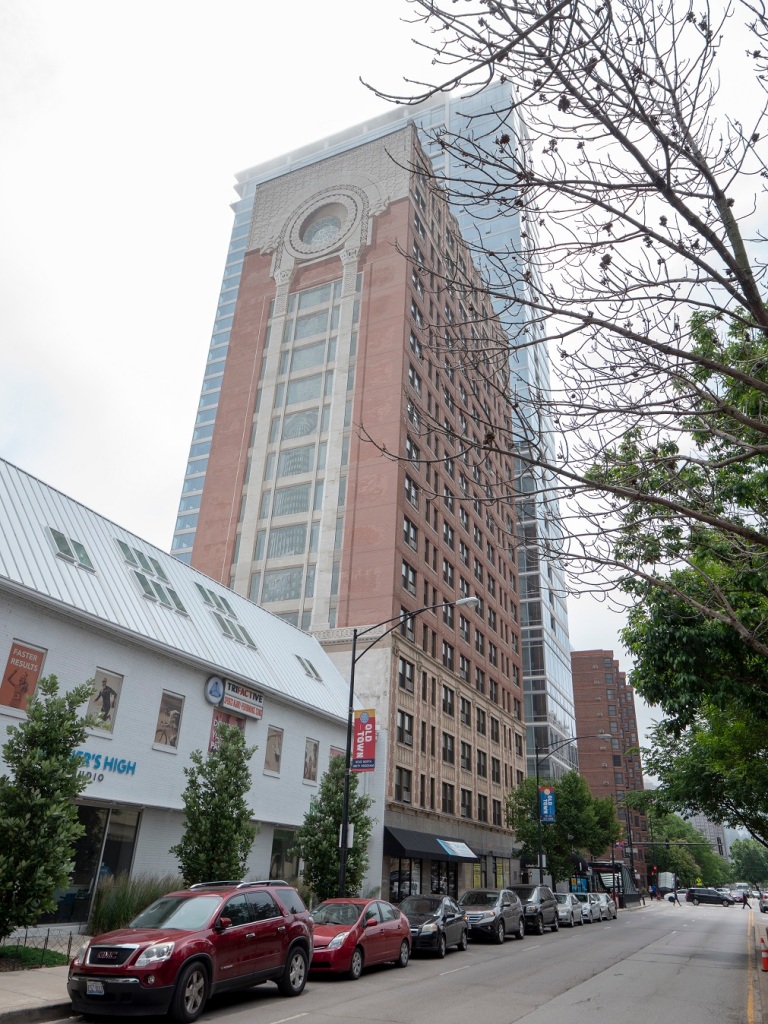 Sadly, the murals were partially covered by surrounding buildings, which were constructed subsequent to the mural.  This is something we’ve seen before (in Boston), and it’s something we would also see in Wisconsin.

It would not—could not–be a “real” Chicago trip without trying a Chicago-style dog. The Wiener’s Circle is small restaurant in Chicago’s Lincoln Park neighborhood. Chicago dogs are drastically different from what we would consider a “normal” hot dog—those topped with mustard, ketchup, onions, relish, and maybe chili. However, “Chicago Dogs” are much more intricate, topped with yellow mustard, chopped onions, sweet relish, a pickle spear, tomato slices, pickled sport peppers, and sprinkled with celery salt.  (This is referred to as “dragged through the garden.”) 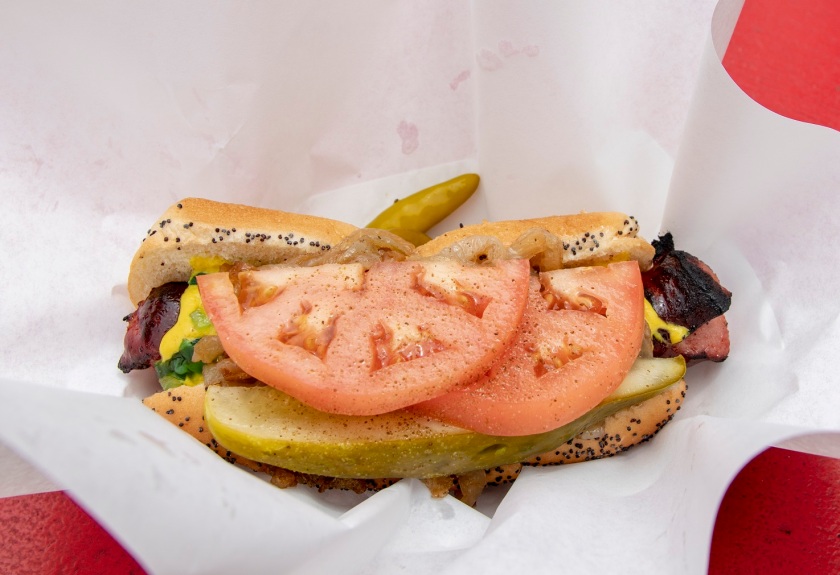 Your Chicago Dog can be prepared either steamed or cooked on a charcoal grill – these are known as “char-dogs.”  We all ordered the Polish Char Dog, which was loaded with caramelized onions, a pickle spear, and tomatoes. By “we,” I mean Professor Yawn, Stephanie, and me.  Maggie ordered a boring “plain dog,” which is basically spam on a bun.

After devouring lunch, we were a bit early for our next stop, a tour of the Frank Lloyd Wright-designed Bach House.  We stopped to walk off some calories on the Lake Michigan shoreline, which was still so foggy you could barely see the water. 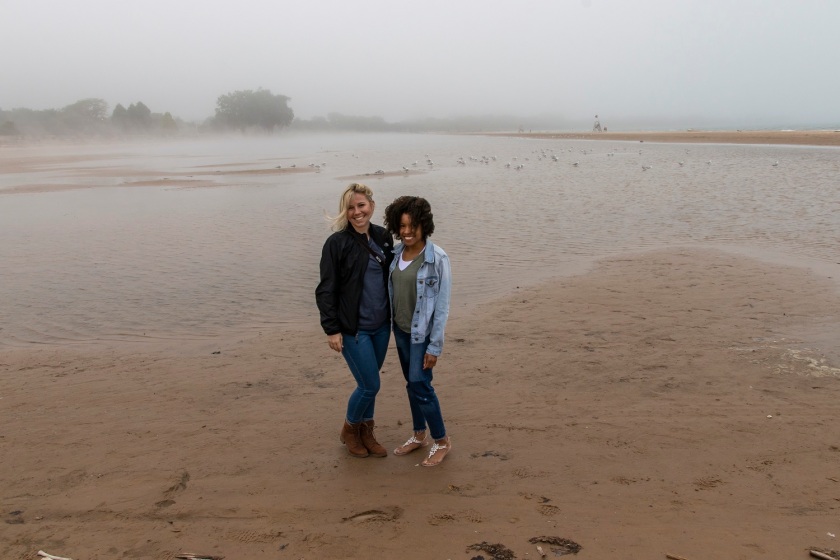 The effect was more than a little strange, especially given the birds flocking to the shore. 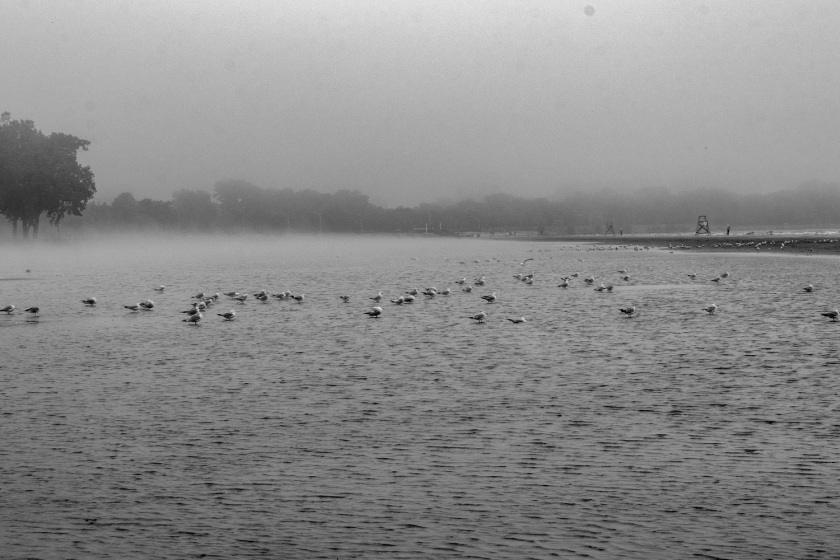 Being in the midwest, we knew we were in Frank Lloyd Wright territory, and that prompted us to visit a couple of his better-known homes in the area.

Our first stop in Chicago was to the Frederick C. Robie house at 5757 S Woodlawn Ave, Chicago, IL 60637. This house was completed in 1910 and is the ultimate expression of Frank Lloyd Wright’s famous prairie style of architecture. The Robie house went through many hands before it was restored to Mr. Wrights original vision by the Frank Lloyd Wright Trust. Over the years since the house’s creation, Wright himself lobbied on behalf of the house when it was threatened to be demolished in 1941 and again in 1957. Despite the hundreds of structures Mr. Wright designed, the Robie house was recognized as one of the ten most significant structures of the twentieth century by the American Institute of Architects.

The house features extensive horizontal lines and dramatization, even in the exterior brick masonry.

Unfortunately, we were unable to tour the inside of the Robie house and get a feel for Mr. Wrights notable “compression and expansion” techniques.

However, we were able to schedule a tour for the Emil Bach house designed by Frank Lloyd Wright, located at 7415 N Sheridan Rd, Chicago, Illinois, 60626. The Emil Bach house was built in 1915, after Wright returned from Europe. This house is a continuation of his prairie style home with the added element of Japanese influence that he later became popular for adding into his architecture. 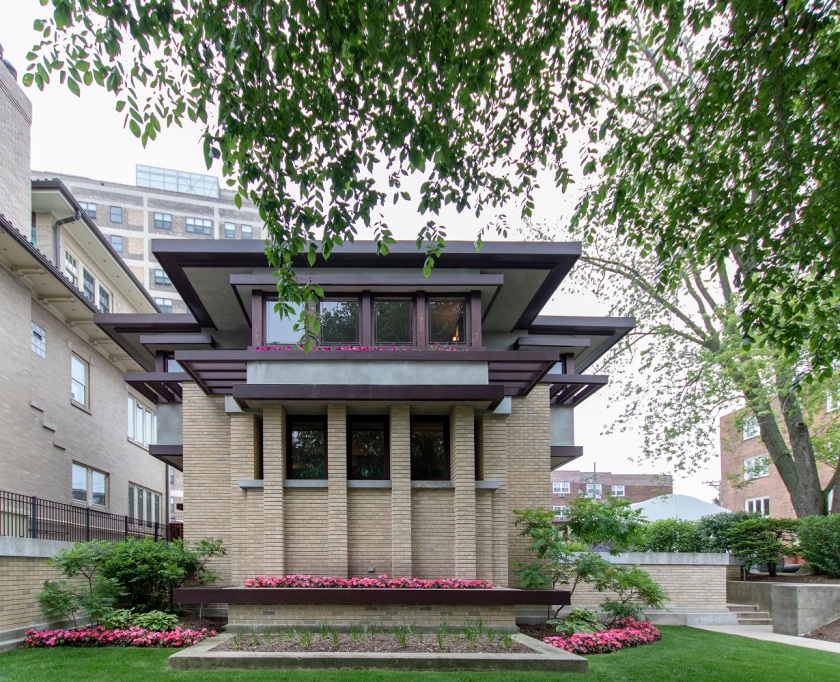 The roofline and ceiling features were examples of that Japanese expression and he coupled that with a series of geometric cubes visible throughout the home.

The tour was enjoyable… 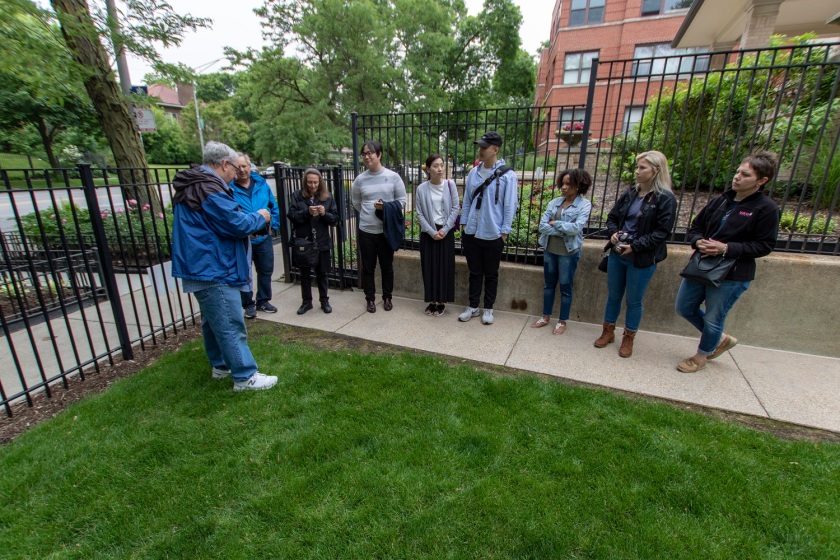 …and we were able to take photographs inside the home…

…which is rare in a FLW home.  The interior was filled with typical Wright touches, such as specially designed lamps, furniture, and many levels in the home, making it something of a labyrinthine tour.

With the closing of our tour… 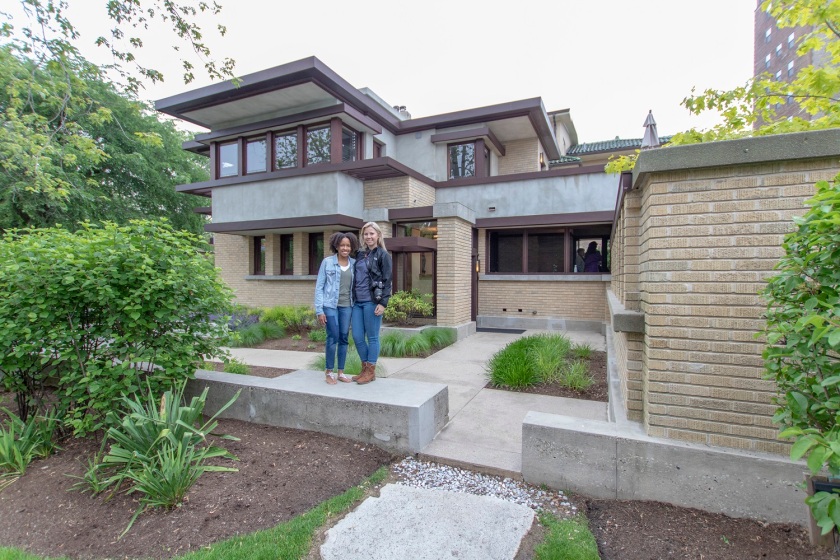 …our next goal was to exit Chicago before the rush-hour traffic got underway.

After arriving in Madison, Wisconsin, the LEAP Students took a stroll around downtown while waiting for a table at “The Old Fashioned”. On our impromptu excursion of downtown, the LEAP students who just recently finished internships in Austin ran into something that is all too familiar: protestors.  The Wisconsin State Capitol is currently in session, so their capitol grounds is a prime location for citizens to advocate and rally for issues that they feel most passionate about.

…in this case, the protesters were addressing “Pride Month,” expressing their views with signs, speeches, and rhyming chants (e.g., “We’re here, we’re queer / we’re fabulous, don’t mess with us”).

We also took a visit to the Monona Terrace, which is a Frank Lloyd Wright structure that we will tour later in our Wisconsin visit. The top of this structure had a beautiful view of the Wisconsin State Capitol.

Looking the other way, we also had a view of the beautiful lake.

Following views of our latest FLW stop, we continued our tour of downtown Madison, and we were surprised at how quickly we accumulated power, eventually becoming the “Monarch of Madison.” 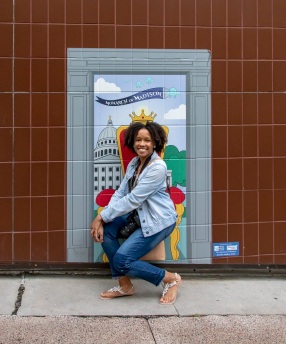 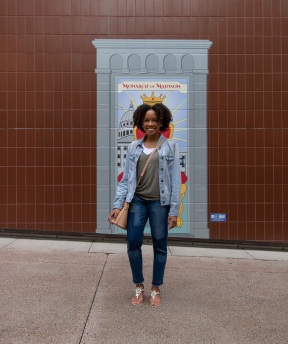 Finally, we had dinner at “The Old Fashioned”. This local restaurant strives to give its native Wisconsin customers a feeling of nostalgia by incorporating everything that makes Wisconsin…Wisconsin, at least as far as food is concerned. “The Old Fashioned” emphasize their meats, cheeses and produce, and local staples.

With Wisconsin being the Dairy state, we ordered the Wisconsin Beer-Battered Cheese Curds. 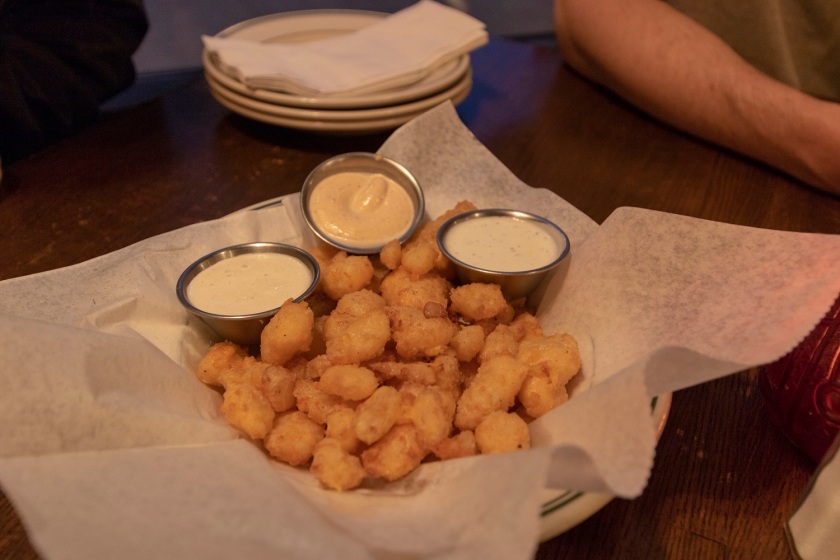 The Wurst Platter, which was filled with Bavaria Sausage, Nürnberger bratwurst, knackwurst and weisswurst with grilled bread, sauerkraut, local dilly beans and mustards.

We learned that popcorn happens to be a staple in Wisconsin and is used in many of their dishes.  And, of yeah, Maggie also got a chicken sandwich. 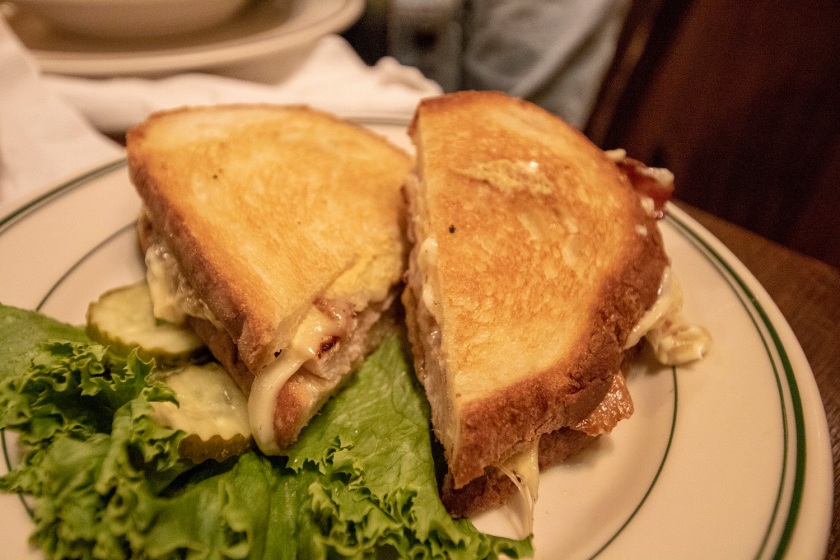 Overall the food was amazing. We ate way too much food, and we nearly needed someone to roll us back to our hotel. Without a doubt, it was a great day in the badger state!