LEAPsters faced another early morning for the closing day of the National League of Cities’ Congressional City Conference. 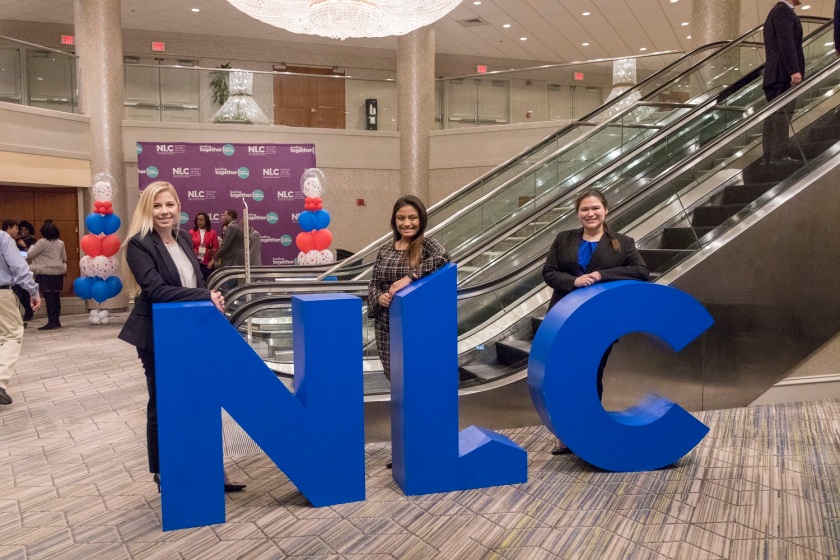 The session opening featured a panel discussion on homelessness with representatives from the Washington Metro Police Department and the National Alliance to End Homelessness as well as elected officials. Ending homelessness has become a high priority in recent years as the homelessness population continues to grow. Local and federal governments have been searching for a solution to this growing problem, and the experienced panel offered possible housing solutions, including shelters, affordable housing, and low income and veterans’ housing options. They also covered diversion programs, which divert the homeless with substance abuse or mental health problems to a health department instead of the police department. 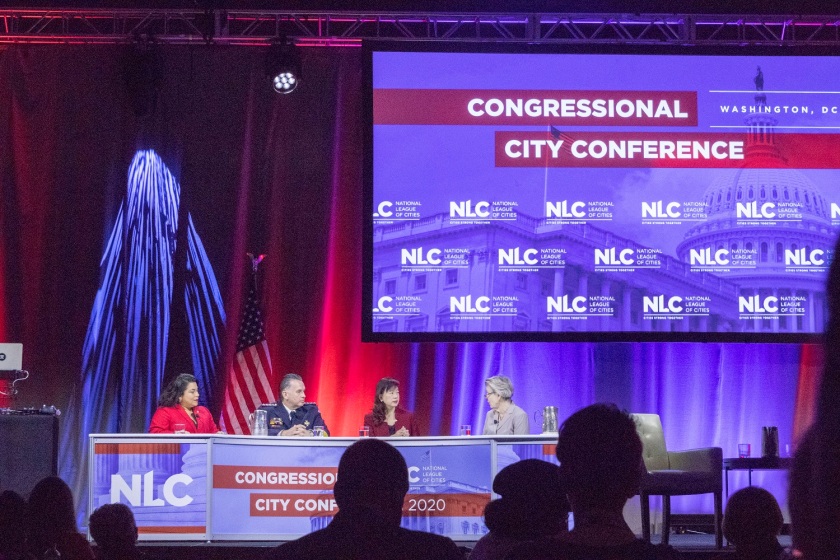 The (knowledgeable and clearly passionate) panel also discussed implementation of education and workforce development programs as a longer-term solution, and ultimately, about the importance of providing a safe and healthy living environment to all residents. 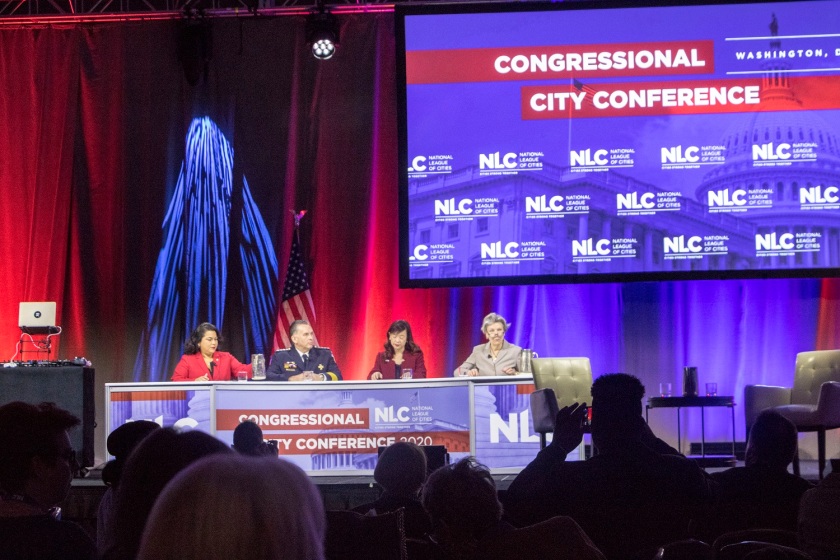 Through an extremely informative Q&A format, Alleyne discussed the difference between COVID-19 ad the flu, and updated the audience on the current (but ever expanding) status of the COVID-19 outbreak in both the US and foreign countries.

Alleyne was able to convert medical and science jargon into easily absorbed information, thankfully.  It was a bit scary, though, to learn about the coming microbial-resistance of future viruses because of the overuse of sanitizers and soaps in our everyday use.

On that note, we all sanitized our hands (maybe a bit sheepishly) and headed to the next session! 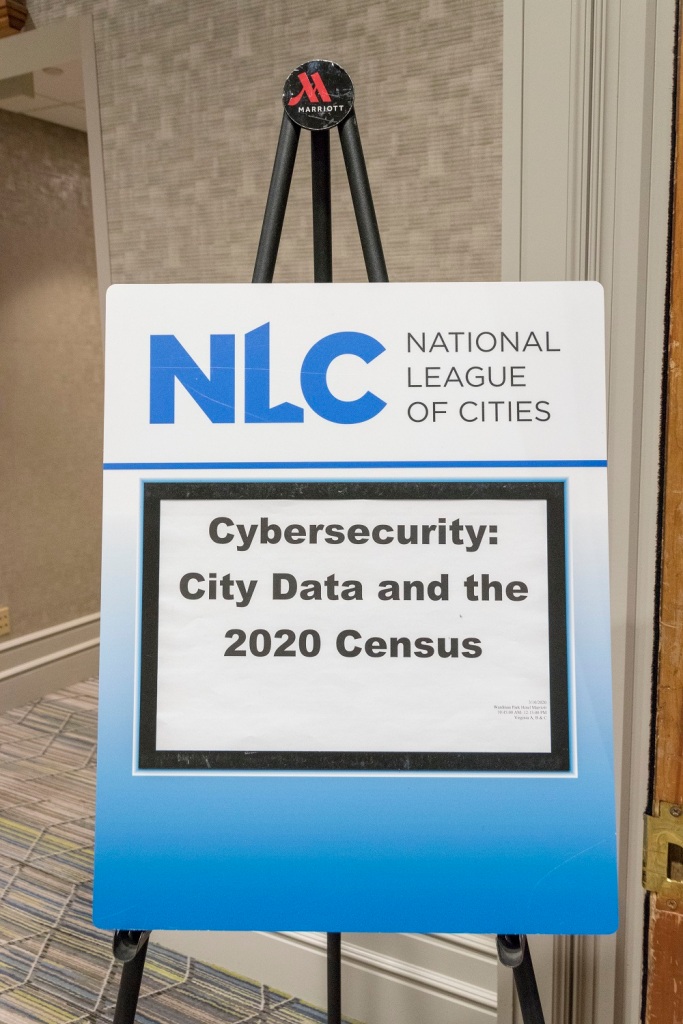 With the country’s change to an online census and the upcoming presidential election, this panel provided some great advice to prevent cyberattacks within their cities at a low cost. 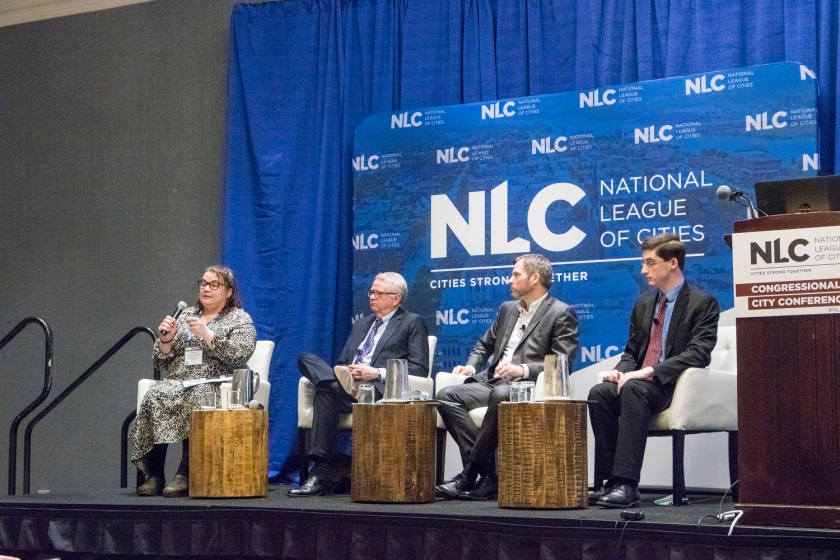 Some advice included the following items, along with a reference to https://www.dhs.gov/be-cyber-smart:

It is difficult to find a “one-size fits all” solution to address cybersecurity. And, accountability for cybersecurity is ultimately everyone’s responsibility—to understand and adopt preventative measures. According to the website referenced above, 47% of American adults have been attacked by a cybercriminal for their personal information.  Notably, Miranda asked a question at this session.

All attendees headed into the ballroom for the closing session,… 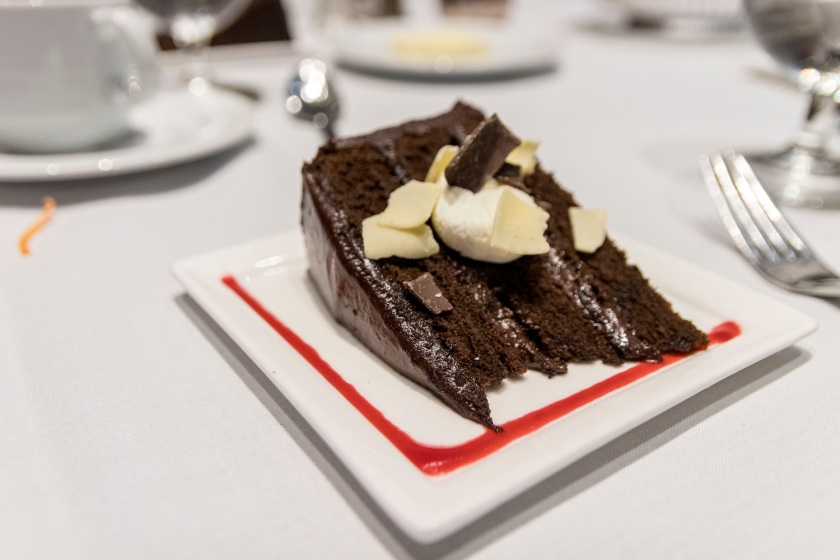 …which included a catered lunch—Caesar salad, chicken with vegetables and rice, and a large slice of rich chocolate cake–that turned out decent!

NLC President Joe Buscaino kicked off the closing session with a few words, followed closely by officials who spoke on greenhouse emissions and plans to pass comprehensive legislation for regulating those emissions that should be based on science, and without partisan politics.  They emphasized that, while this is an important issue, much misinformation abounds regarding efforts to reduce emissions. They indicated that several states have had success reducing their footprint, with Georgia making tremendous gains with a 22% reduction, and that the US is the global leader in reducing these emissions.

Buscaino next introduced Ms. Una Garvey, the Convention Center and Tourism Director for the City of Tampa, Florida. Tampa will host NLC’s annual City Summit this fall.   Garvey invited everyone to the conference and shared a video from Mayor Jane Castor, who encouraged everyone to attend the Summit and immerse themselves into all the city had to offer from food to entertainment.  Following that video, Buscaino presented the “President’s Award” to Congresswoman Anna Eshoo (not present) for her tireless efforts on the Hill to advocate for cities and local government.

Buscaino then introduced our keynote speaker as “the woman who needs no introduction,” current Speaker of the House Nancy Pelosi. Pelosi walked onstage to a standing ovation. 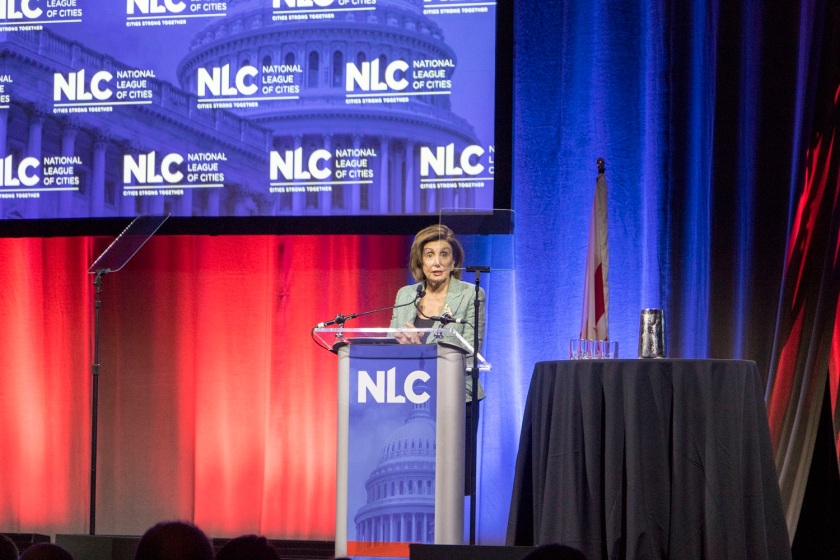 She started by thanking the crowd for their efforts for their public service, and spoke about how not only are public servants the eyes and ears of their cities but that their success was America’s success. Speaker Pelosi spoke on Congress’ commitment to working with local governments, especially considering the COVID-19 outbreak, by recently passing an economic response package that allocates funds directly to assist state and local governments. Pelosi also spoke about infrastructure needs affecting our communities, gun control (being adamant that it not be about politics or party but about keeping the future safe), and ended her time commenting on how it is our moral responsibility to be good stewards of this planet.

We next found ourselves on the grounds of the Cathedral Church of Saint Peter and Saint Paul in the City and Diocese of Washington, better known as the Washington National Cathedral.  We were fascinated by the exterior of the architecture, and of course, could not resist posing in front!

Before our tour, we visited the gift shop where a LEGO replica of the Cathedral was being built, and where which we could purchase and install a LEGO brick.  (Of course we did!)

During the 2011 earthquake the Cathedral suffered extensive damage, and the LEGO installation is helping fund repairs. 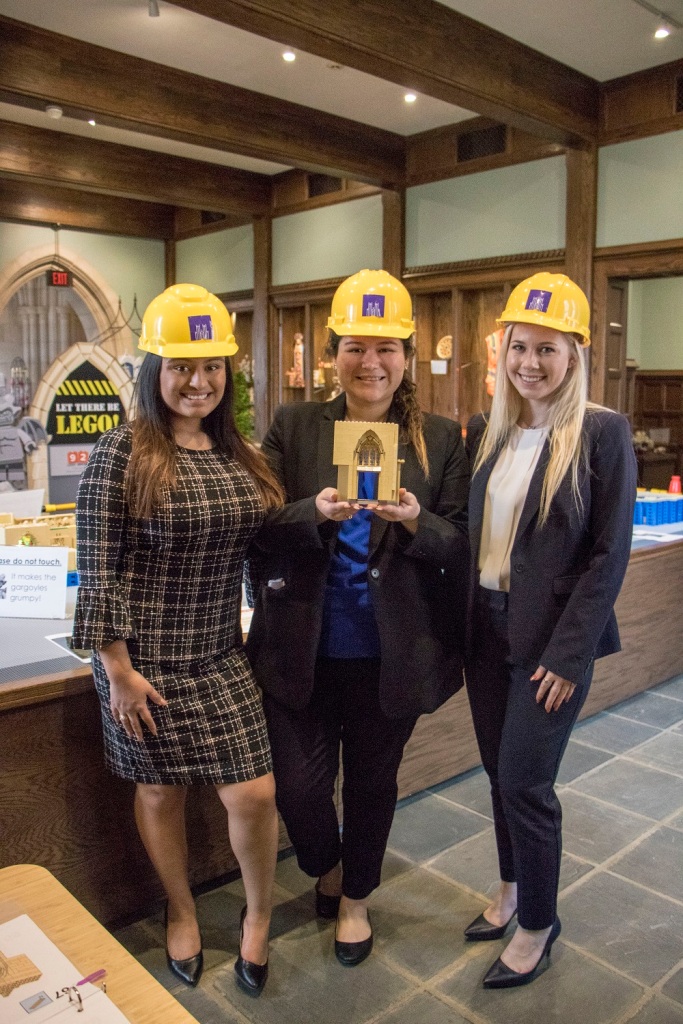 Repairs continue as funding become available; current estimates put the completion at 2-3 more years. Phase I repairs to the Cathedral interior were completed in June 2015; Phase II will pivot towards the damaged pinnacles of the central tower and to the various chapels found throughout the Cathedral.

During our tour, we learned that it cost $65B to the build the Cathedral, completely from donations, and that it took 83 years to complete. The Washington National Cathedral is the sixth largest cathedral in the world and the second largest in the United States. Approximately 418,000 worshippers and tourists visit the Cathedral annually. 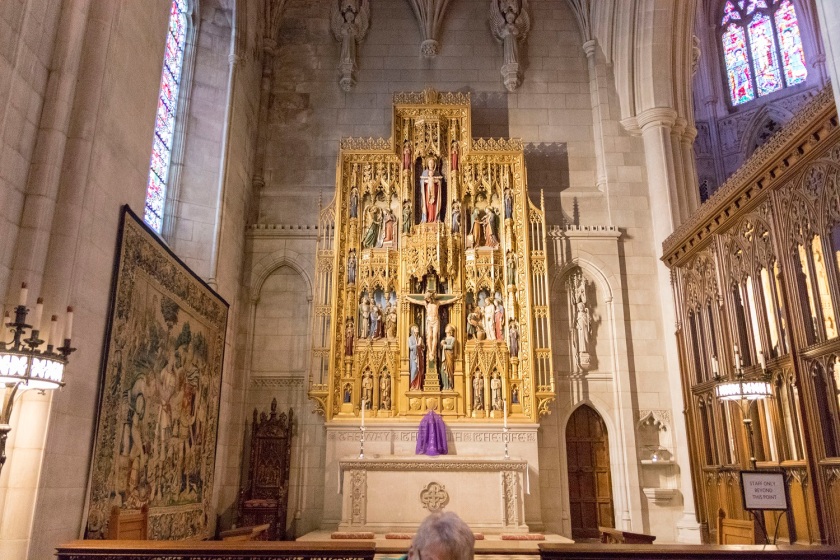 We were in awe when we caught sight of one of the Cathedral’s showpieces, the Rose Window, a 26-foot window made of over 10,500 pieces of stained glass, created by artisan Rowan LeCompte and fabricated by Dieter Goldkuhle.

Another favorite among the 215 stained glass windows was the Space Window, donated by former NASA astronaut Thomas O. Paine.  Photographs taken during the Apollo 11 space flight inspired the design for the Space Window, and amazingly, the Space Window actually contains a small piece of moon rock.

The Cathedral contains many other interesting finds, such as:

We saw many carvings, stained glass windows and beautiful chapels and did not even begin to cover the other areas of the Cathedral.  Inspired to return for the “behind-the-scenes” tour someday, we headed back to the hotel, joined by even our taxi driver in proclaiming just how beautiful the Cathedral truly is.

We took the Metro (being experts by now) to try a DC favorite, Ted’s Bulletin, on the recommendation of one of our two special guests, former Junior Fellows Ademide Adedokun and Justin Veillon.  Ademide and Justin both live and work for different governmental agencies in the DC area.

Over appetizers (Candied Nueske Bacon, Loaded Tots, and Pretzel Bites), we learned a little more about their journeys to DC. Both Ademide and Justin had interned and/or worked for Congressman Kevin Brady (our Huntsville Rep!) and although they had different paths, they each found their way to Capitol Hill. They also shared their internship experiences – both had interned with the City of Huntsville, a connection we could all make and talk about, as former & current interns and part-time employees.

We quizzed Ademide and Justin about how D.C. works, and without job-specific detail, they each described a typical day: the commute; the day-to-day work (sometimes explosively interesting, sometimes soul-grinding, but somehow always interesting); and the importance of maintaining a life-work balance. Ademide provided a little more background on transitioning between different positions and agencies, and how she has been successful navigating some of the DC “waters.”  She recently bought a house, so we all congratulated her on that.  Justin recently started a new position and, while his days are long, he shared that he does love about his work that he is in an environment of people who work hard and tirelessly every day.

Over our entrees (a variety of burgers and chicken dishes), we also shared our after-graduation plans and took in any advice offered. Ademide and Justin were great in offering insight on our different career paths.  One thing they insisted on, though, is that no one ever has it figured out, and if you’re willing to take a LEAP at opportunities, sometimes you can find something you really enjoy. 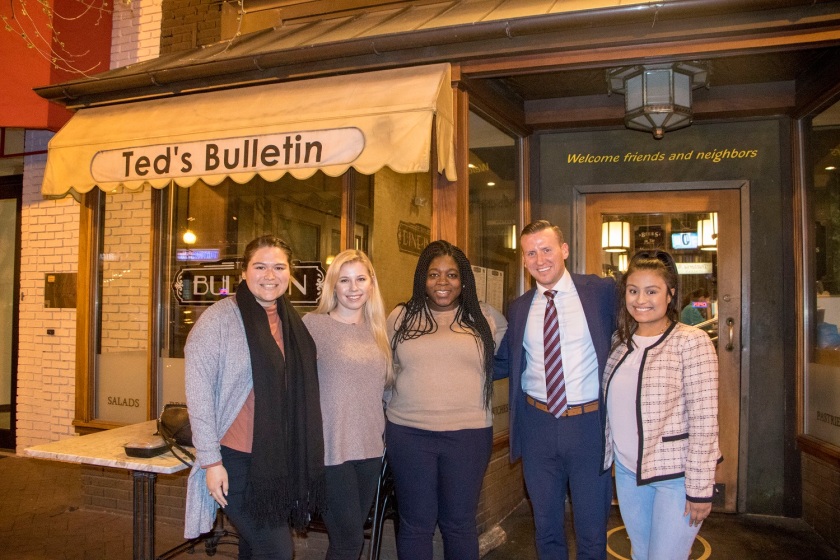 Either way we leaned—wanting to move to DC, or maybe just planning another visit—we truly appreciated their insight. (And we really appreciate Justin dropping us at the National Mall – we got to chat a little more on the drive, and we were spared one Metro ride – thanks again, JV!)

Our first stop was the Lincoln Memorial.

We had heard that the National Mall is exceptionally popular (and pretty) at night, with the monuments lit. On our arrival at the Lincoln Memorial, we headed up the intimidating steps, surprised by the sheer size of the statue and monument. Lucky for us, there was lull in tourists taking pictures at the base of the statue, so we stepped in for a few shots.

A little on the Lincoln Memorial: President Abraham Lincoln was assassinated on April 15, 1865. Following his assassination, Congress created the Lincoln Monument Association to build a memorial for the former President and his legacy. On February 12, 1914 the Lincoln Memorial was dedicated and construction began the following month. On May 30, 1922, a dedication ceremony was held with Lincoln’s only surviving son in attendance. 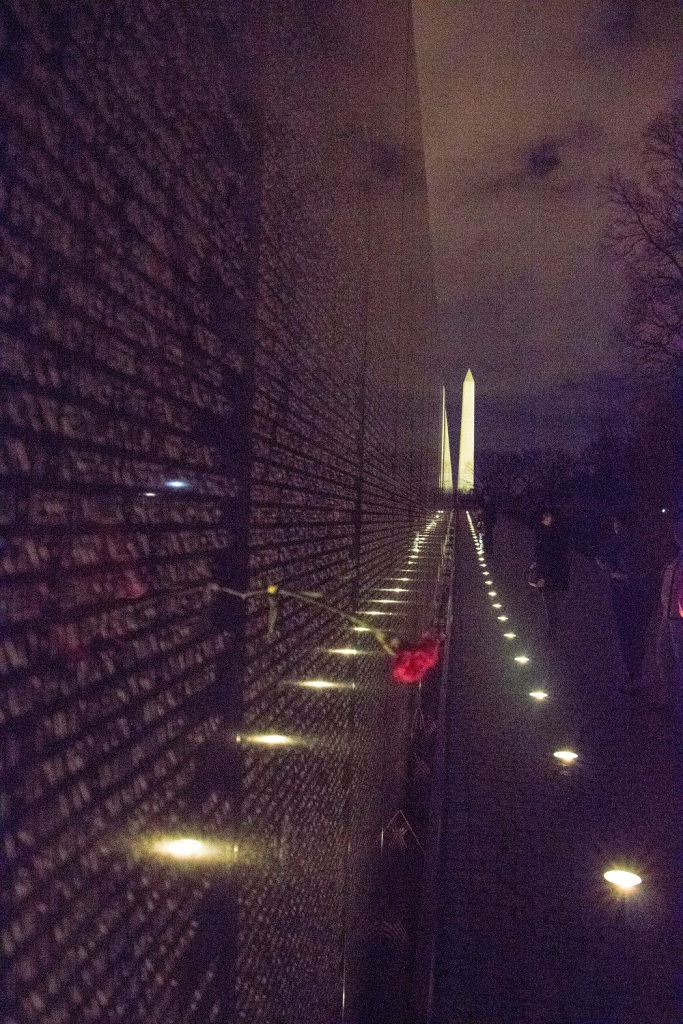 “The Wall” memorializes American veterans who died in the Vietnam War. Veterans’ names are listed in the order that they died or became unaccounted for while overseas. Symbolically, Lin designed the wall to appear as a “wound that is closing and healing,” and is a form of land art that was popular in the 1960s. Built on a 125-degree angle, one wall points toward the Lincoln Memorial and the other points towards the Washington Monument. We visited all three “parts” to the Memorial, including The Three Soldiers and the Vietnam Woman’s Memorial, but we all agreed that The Wall was the most impressive.

Finishing up the night, we arrived at the WWII Memorial, which includes 56 pillars representing the United States and territories involved in WWII. One side of the memorial represents the “Atlantic” and the other side the “Pacific,” symbolizing the global impact and extent of WWII. Because of the season, the fountain and reflecting pool had been drained, but we could still feel the impact of the Memorial, dedicated by President George W. Bush on May 29, 2004. 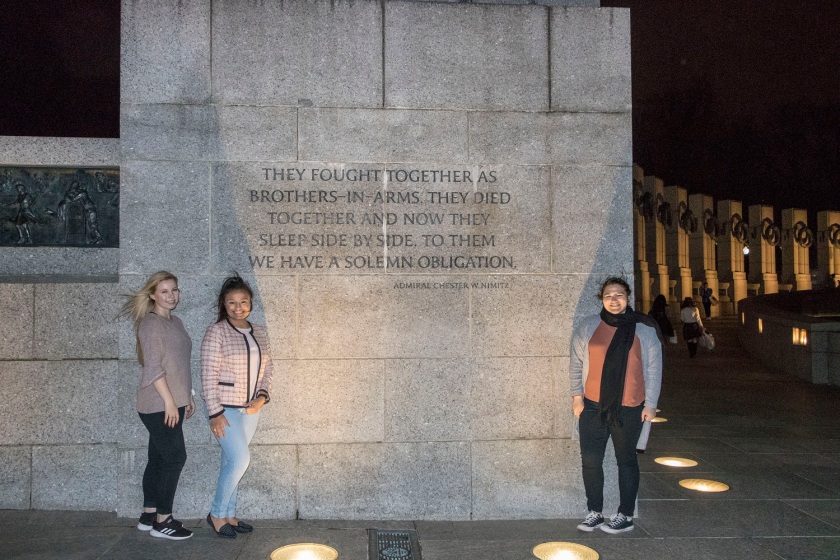 Luckily, we got some pictures before our visit was cut short by rain!