Introduced by David Jones, the CEO of the Bush Foundation… 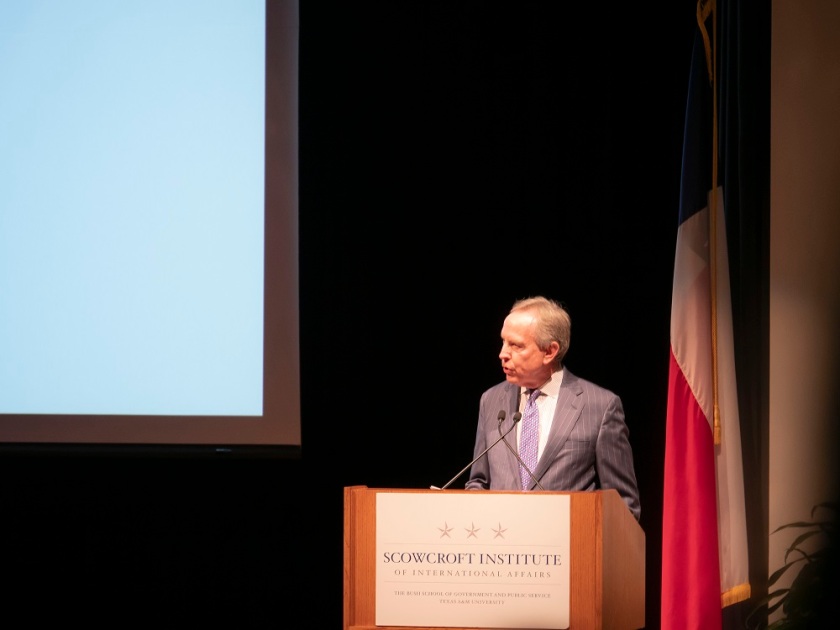 …the guests were immensely informative and entertaining.  Card focused on Bush as a public servant; 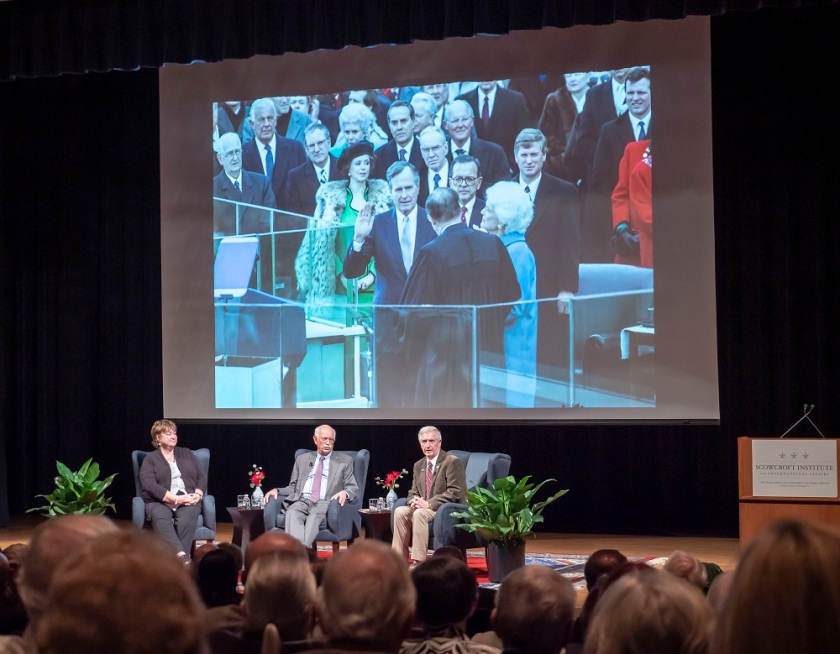 Becker focused on Bush the human being; 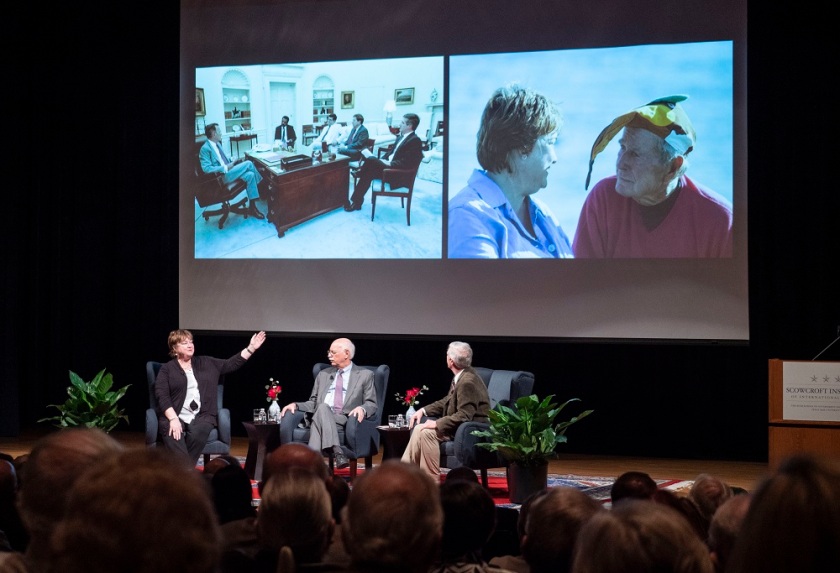 …and Natsios served primarily as the moderator, while contributing a few stories of his own. 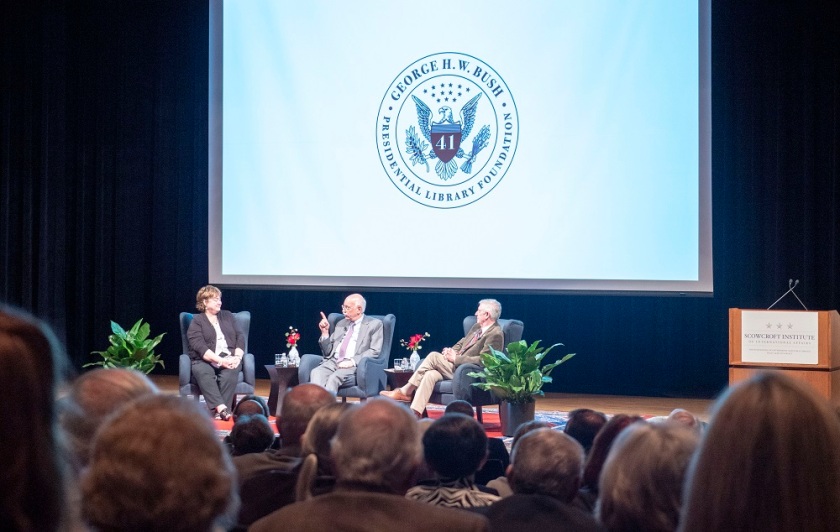 Card recounted Bush’s impressive resume, emphasizing that this background (Congress, CIA, UN, Ambassador, Vice President, Chairman of the RNC) offered him an appreciation and understanding of how institutions worked. 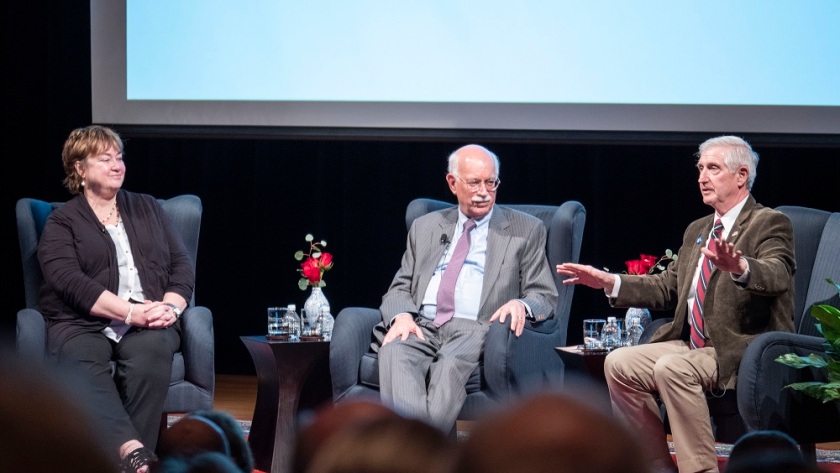 Summarizing Bush’s time in office, Card concluded that Bush was the “greatest one-term President in US History.” 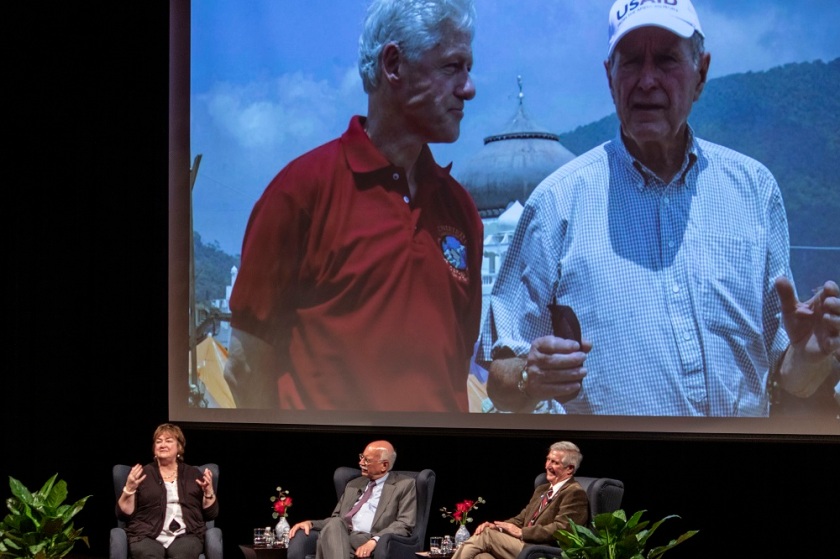 She discussed Bush’s ability to bring together the former Presidents–across party lines–and other notable officials for humanitarian aid.  A couple of years ago, for example, all former Presidents showed up to Texas A&M for a charitable cause, and many of them only showed up after learning Bush would be present. 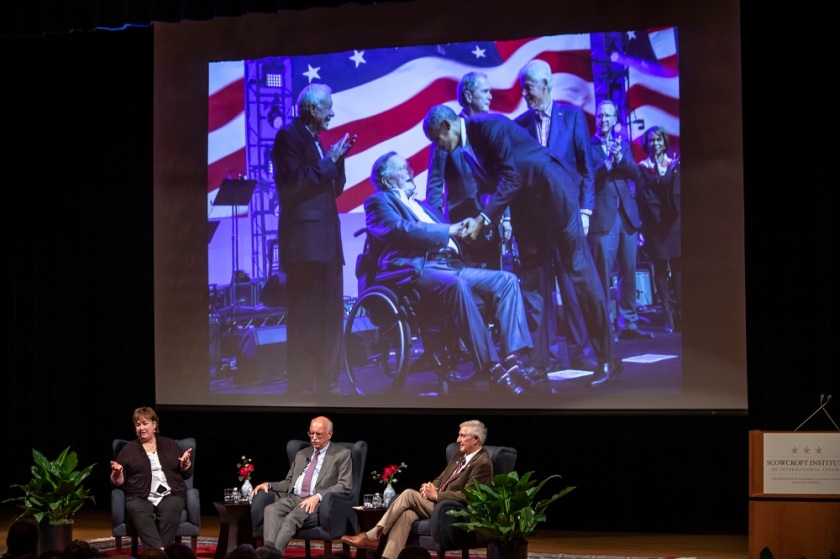 She also described how Bush agreed to help Cameron, Louisiana after Hurricane Katrina.  What impressed her was that Bush agreed to do this fundraiser despite Cameron being far from the public eye and any large media market.  Moreover, Bush was able to get George Clooney to visit and help commemorate a new ER for Cameron, a sorely needed facility in the wake of Katrina.

The most poignant story from the night was Andy Card describing when H.W. Bush had made the decision to go to war. Bush sat somberly in his office that day, thoughts racing, and, after much deliberation, said, “I just made a decision that will cost men their lives,” a moment that still resonates with Card. 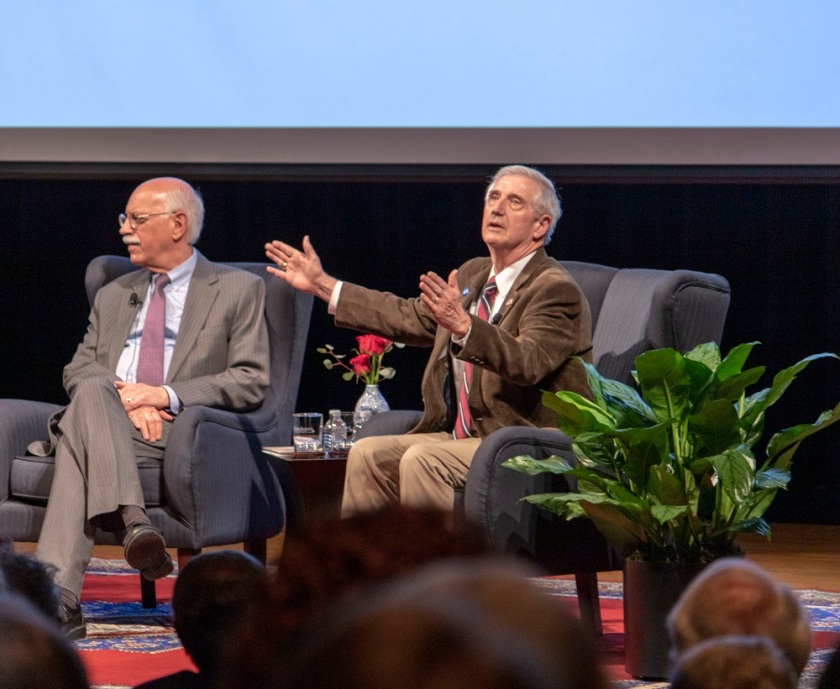 The event ended with a short, silent slideshow of pictures from former President H. W. Bush’s funeral and his funeral train (Interestingly, the LEAP Ambassadors visited the funeral train procession and wrote about it).

It was an amazing experience for us to learn about a beloved president from individuals who were so close to him. 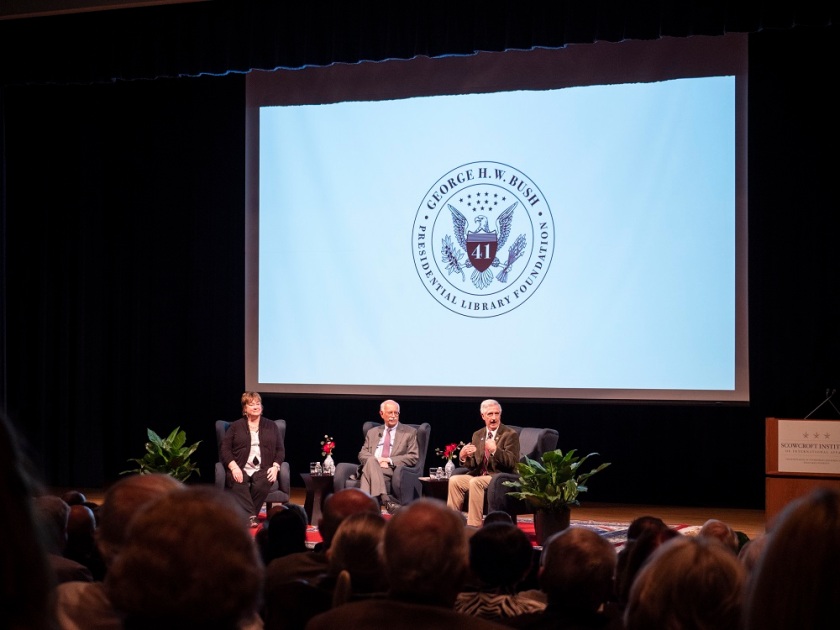 Afterward we were able to visit with Ms. Becker (who will see later in the week for a tour of the Bush Presidential Office), Andy Card… 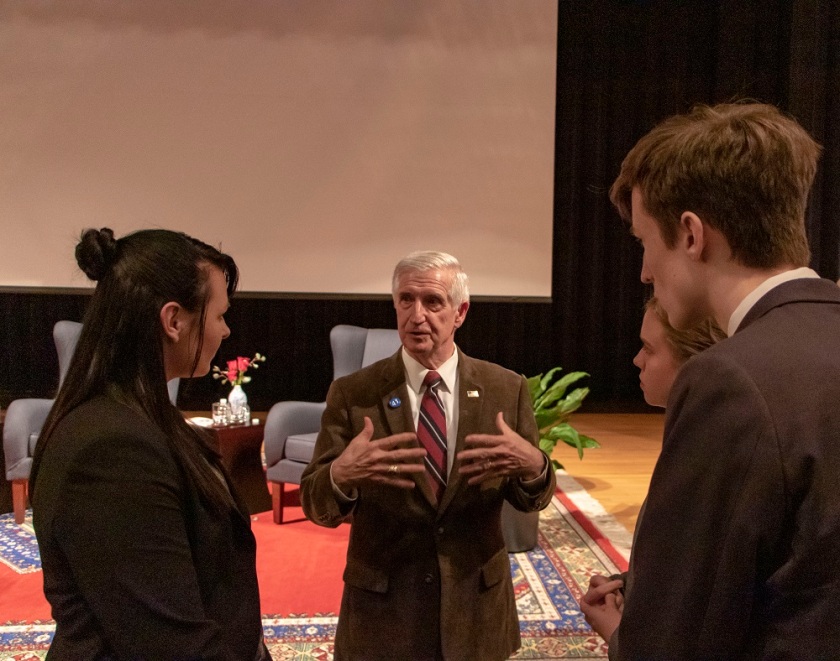 …and Jim Olson, former Director of Counterespionage in Europe for the CIA. 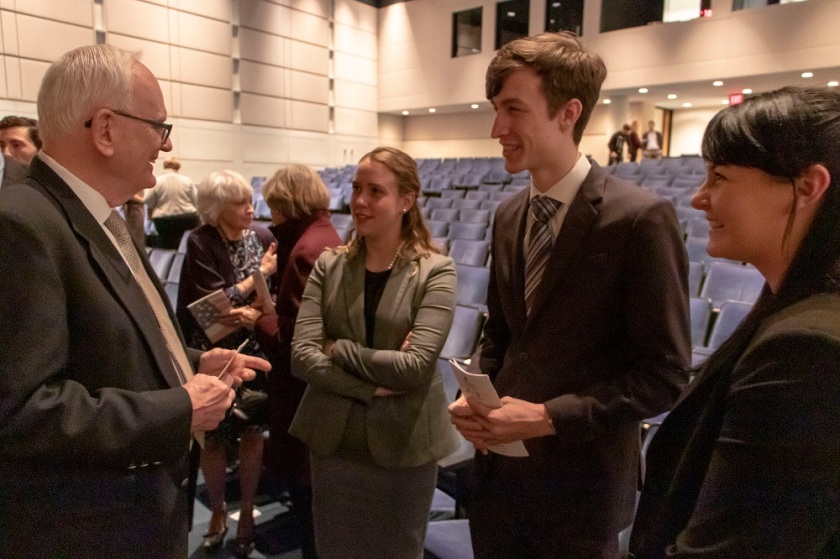 After this wonderful evening, we stopped in Bryan and ate at Caffé Capri, an Italian restaurant downtown. It was fitting that the wall to the right once you enter was rife with photos of the staff meeting President Bush Sr. Everything we ordered, ranging from the tortellini alla Capri…. 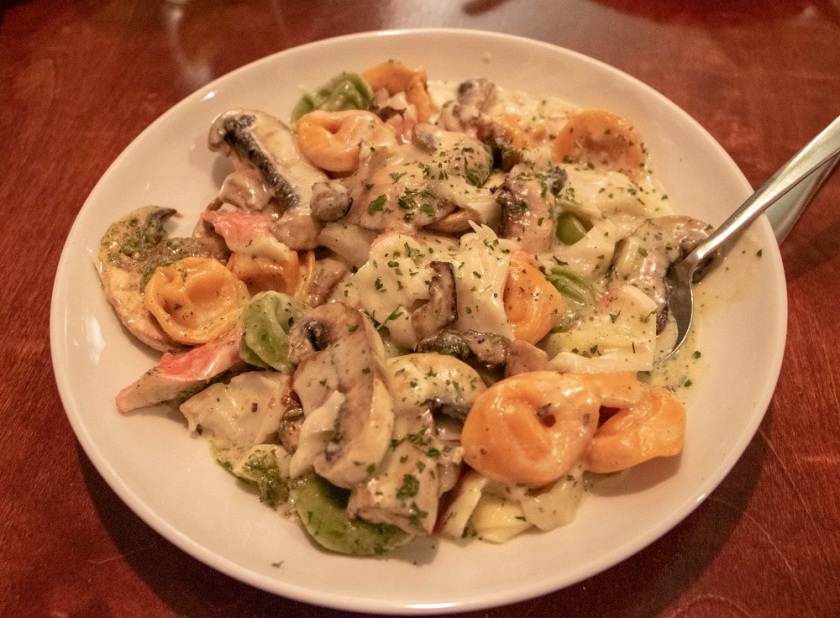 to the baked penne… 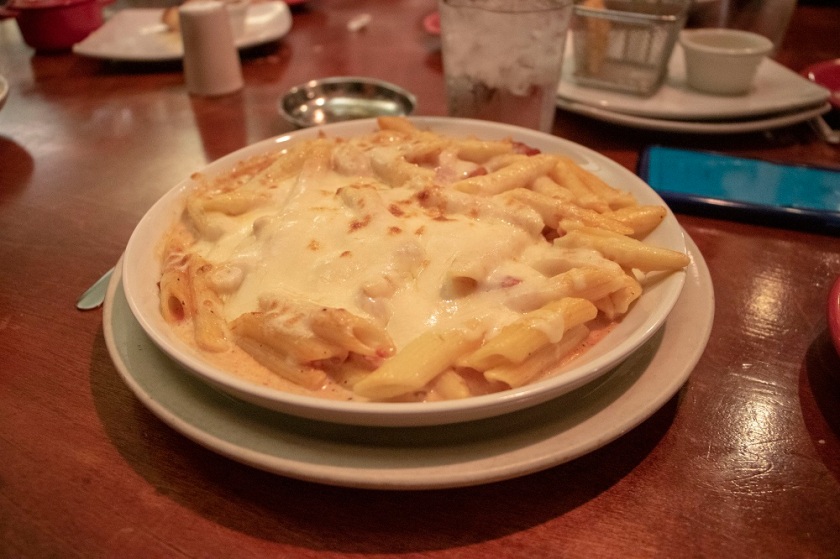 was delicious, however the chocolate toffee mousse cake was the icing on, well, the…cake. 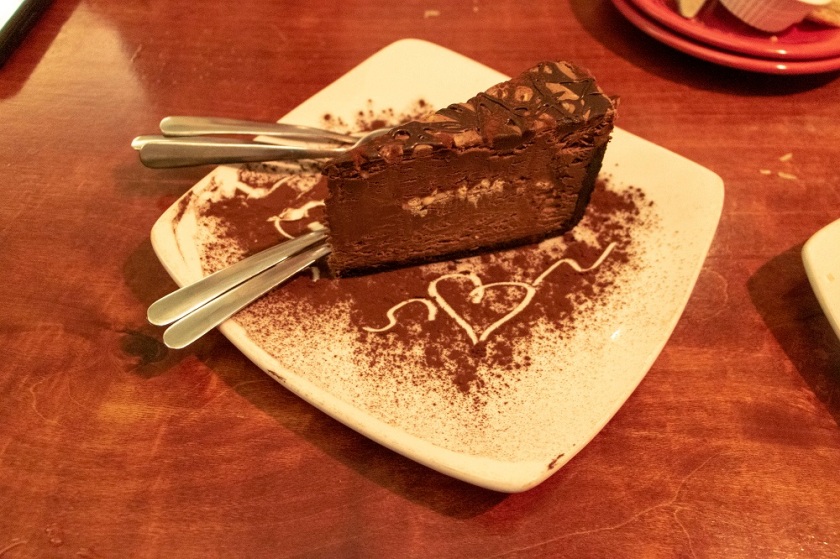 The food was delicious (but the bathrooms needed cleaning!) and being in downtown Bryan after the sun had gone down was gorgeous in and of itself. It was definitely a perfect way to end the evening. 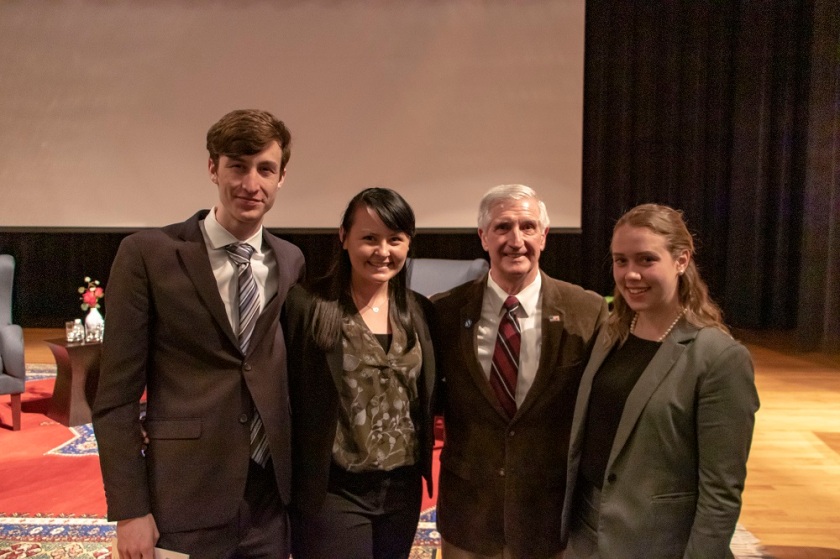