Despite the pandemic, we were able to kick off our first Pre-Law Society meeting of the Fall 2020 semester. Our advisor, Mike Yawn introduced the PLS to all the new members and explained our agenda for the evening. For the first meeting, we had the great honor to have a Zoom meeting with two special women, Alicia Cramer and Shawn Adams, to discuss law school and answer any questions we may have in regard to admissions.

To begin, we first had Shawn Adams speak. She is not only an attorney, but she is also the Assistant Director for Recruitment at Texas Tech Law. She discussed how Texas Tech has a ‘dual degree program’ where a student can finish their first year of school, then start their Masters. They can complete law school in three years, receiving both Juris Doctor (JD) and an MBA. She also mentions how you can be a “student attorney” where you can work under a licensed attorney and have clients and go to court, which I felt like caught a lot of members’ attention!

Dean Alicia Cramer was next. Cramer is the Assistant Dean of Admissions and South Texas College of Law. To showcase the school, she mentioned how they were recently nationally ranked for their Moot Court and Mock Trial teams. As an assistant dean, she emphasized the importance of being involved in different programs and clinics the school offers. She also encouraged students to begin building relationships with people who may write letter of recommendations.

Two questions that stuck out to me were:

Q: Do I need to apply separately for scholarships, or will I receive automatic consideration through the admissions process?

Q: I was another major for two years and it tanked my GPA. Even with the A’s and B’s I have been making in my Pre-Law major, my GPA hasn’t touched a 3.0 yet, does that ruin my chance to be accepted?

A: No, if your GPA isn’t the best and your LSAT scores are subpar, your personal statement will really dictate your acceptance or not. You want a great personal statement that not only describes you as a person but also explains why your grades were not the best. You need to stick out during the admissions process and show the board why you deserve to attend their law school.

After the Q&A portion of our meeting, we applauded and thanked them for their time and insight on the navigation of law admissions. To end our meeting was officer elections. The group had eight members running for positions of VP of Finances, VP of Membership, Secretary and Historian. With time running short, members’ speeches were short and to the point. For President, we have appointed Quinn Kobrin (senior), VP of Finances, Leslie Canchola-Rangel (junior);

The day before the first day of classes two LEAP Ambassadors tried to assist a group of 17 incoming freshmen with the transition to full-time college.

Each student introduced themselves by stating their name, one thing they are scared of about starting college, and then a fun fact about themselves such as their favorite color or the sports they played in high school. Afterward, a student who shared the same fun fact as the student previously would link arms with that student and begin their introduction. This students had a great time getting to know one another and opening up about their fears. In the end, the ice breaker showed that we were all connected to one another and that we all shared the same initial fears when starting college.

After the ice breaker, we addressed some of their fears by answering questions and giving basic advice. We discussed the pre-law society, the LEAP Center and the events it hosts like the mock LSAT and the mock law class, all of which are excellent tools for those who want to pursue a career in law. Overall, the group felt more comfortable starting their freshman year and we enjoyed meeting these students and hope to see them at upcoming LEAP events!

Although we started the day in Huntsville, Texas, after arriving at the Wynne Home we were transported to tropical Hawaii in a matter of seconds. We grabbed a lei and prepared for a fun-filled event.

The occasion was the Wynne Home’s annual Hawaiian Luau and, as with all things Wynne Home, we try to be there to help.

We began by assisting with set up.  This involved insuring that there were selfie-stations… 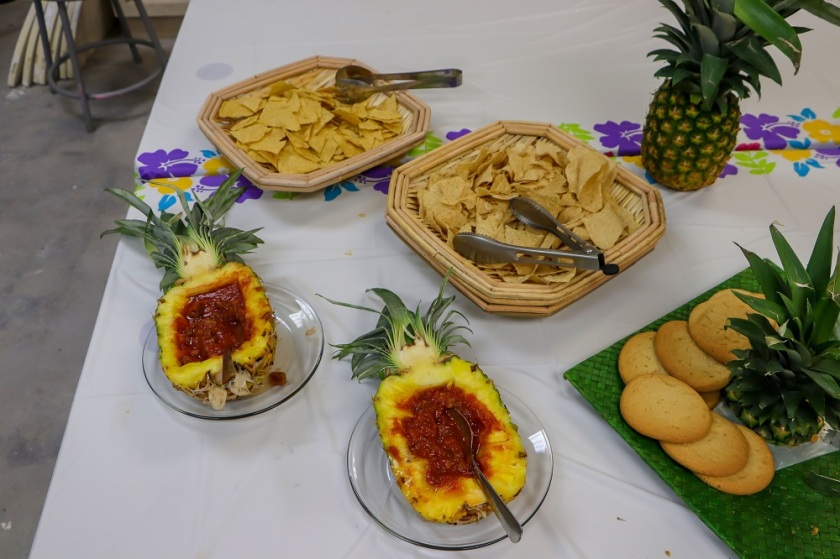 …craft table and side walk chalk….which soon filled up with children.

One of the favorite activities each year is the Limbo contest, and that proved true this year.  And, as with previous years, we had to explain and re-explain the rules…

…and some LEAP Ambassadors.

The kids then teamed up and competed in a beach relay where they took turns scooping sand from one bucket and running and placing it into another. Running and dropping sand made the game fun for the kiddos who competed for tickets and toys.

These events provided children the opportunity to not only have fun, but win a lot of prizes in the contest.  Following an enjoyable coda featuring Ballet Folklorico, the crowd wrapped up with some more food, a bit more hula hooping, and some final selfies.

It was such a fun day and we hope to see you at next year’s luau!

When the first leaves start to fall in the pine country we all know what time it is. No, not football season, but the annual HEARTS Museum garage sale. The HEARTS Veterans Museum of Texas is a museum that honors those who have fought for our freedom in many different wars. Apart from serving as an engaging Veterans museum (not a military museum) it is a unique addition to our community.  With proceeds that often exceed $10,000, the Garage Sale contributes directly to preservation of the Museum’s collection.

The Museum is also one of the LEAP Ambassadors foremost philanthropic causes, with the Ambassadors volunteering at key events throughout the year.  This weekend was no different, with the ambassadors participating as cashiers…

As with any HEARTS Museum event, in this writer’s opinion, “the best thing about volunteering are the stories the veterans share.”

Some of the items that were sold at the garage sale included clothes, hats, books, tea sets, and other marvelous curiosities. With the non-stop rush of Huntsvillians in the shopping spirit, the Ambassadors were plenty busy, at times carrying cart-full of antiques through the Storm Shelter doors. Although the garage sale is labor-intensive work, we had a lot of fun. 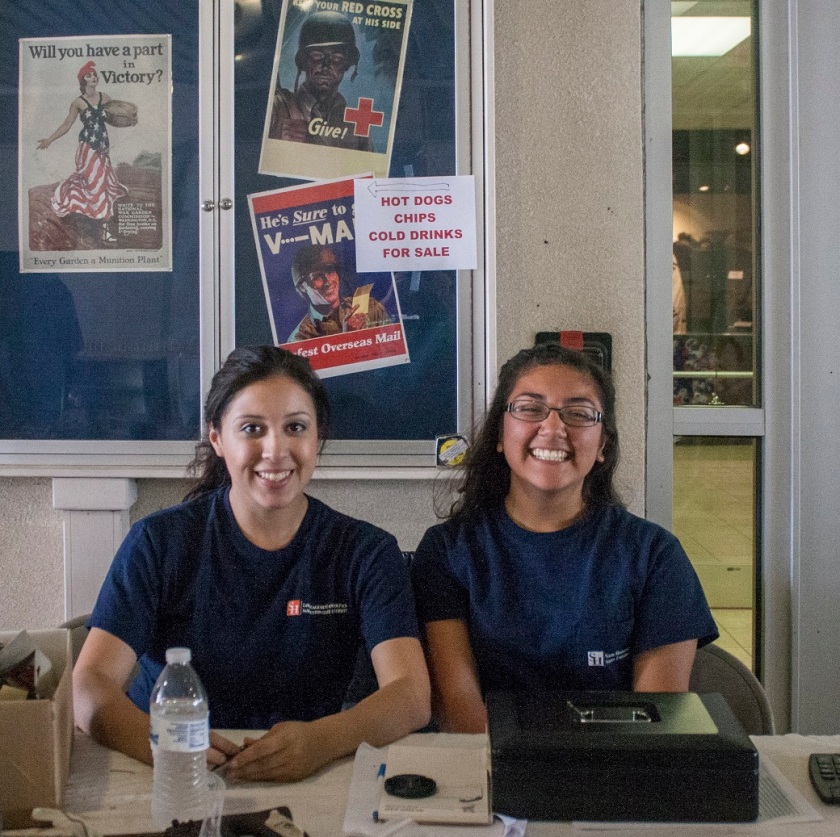 And, after our shifts were over, we were able to shop around and stock up on nifty knickknacks.

In all, the active volunteering and shopping made it a great way to spend a weekend!

The LEAP Ambassadors would like to thank Letty Clark, for her great work at the HEARTS Museum and for being such a pleasure to work with and for!

For the eighth consecutive year, the LEAP Center (and its forerunner, the Junior Fellows) partnered with the Huntsville Public Library to lead a spring Citizenship class to immigrants.  The class is five weeks long, one night a week, and it covers the major material on the Naturalization Exam.

This year, we had more than 30 people sign up, but scheduling difficulties reduced the number of immigrants who actually attended.  With a core of about 10-15 immigrants per night, the LEAP Center students and volunteers (thank you Terry Stivers, Roberta Plant, and Carol Hayes) worked with these immigrants to help them learn American history and government.  We had a fun kick-off, with the Mayor and council members stopping by on the first night (on their way to the parade):

To become a citizen, an immigrant must meet certain legal requirements.  They have to be in the country for a specific length of time (which varies by whether you are married to a US citizen), have generally followed the law, and not have any egregious moral failings.

The test itself includes an oral section, where immigrants read statements; a written section, where immigrants write down sentences read to them; an oral interview, in which immigrants are asked about their past and behaviors (“are you often drunk?“, “have you ever been a prostitute?”); and they must answer correctly at least six out of ten questions pertaining to American government and history.

These questions range from naming one of the two longest rivers in the US to knowing three cabinet posts to knowing the name of the national anthem.

We covered these major topics over the course of the first four weeks.  Karla Rosales, who took a leadership role in the program by virtue of her internship with the Huntsville Public Library, led off the proceedings with a bit of instructions…

Although most of the presentations were led by Professor Yawn, the students worked with small groups of immigrants throughout the program. 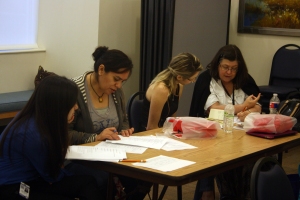 It was also nice to receive community support.  On week four, for example, the Daughters of the American Revolution attended and provided American-themed gifts to the immigrants–flags, pocket constitutions, pencils, and other fun things.

This was a big hit, especially among some of the immigrants’ children:

On the final week of the immigration class, the immigrants and volunteers relive the first Thanksgiving, with all participants bringing dishes from their native country and joining in a celebratory feast.  The food is great!

Another special feature of the final week is the presentation made by Audrey Biggar, a local immigration attorney.  She graciously agrees to assist the immigrants and provide advice for navigating the process. (She is also President of the Walker County Bar Association, making her one of the more civic-minded of the local bar.)  She also brings great Thai food to the dinner!

Finally, the immigrants receive a certificate of completion, a prelude, we hope, to citizenship.

And with one final group photo, the class is over.

Fortunately, it wasn’t long before the students and immigrants got back together.  The Huntsville City Council invited the immigrants to a City Council meeting to be recognized for their efforts.

For the immigrants and the students, it was their first-ever City Council meeting and, again, a big hit among the kids.

Over the past eight years, the LEAP Center has worked with about 150 immigrants from more than 20 countries.  Approximately 40 have obtained their citizenship.

Students associated with Sam Houston’s LEAP Center volunteered at the Wynne Home’s newest art exhibit featuring the work of Charles Jones. The exhibit, “The Art of Woodcut, Artist Books, and Portraits,” features large pieces that highlight Jones’s inspirations, including Kurt Vonnegut, Eudora Welty, and F. Scott Fitzgerald, as well as the art work he has done for books including the award-winning “Chopper Blues.”

Jones, who is an SHSU  alum, was on hand to deliver remarks describing his career and his work.

Stanley Lea was also featured at the opening. Lea’s works are featured in the sales gallery and include works that date back to the 1970s.  Lea’s works can be found in museums across the United States (including the Smithsonian) and many SHSU students and faculty have seen the works in the Gaertner Performing Arts Center.

Nancy Gaertner from the Friends of the Wynne led the volunteer event, with five students from the LEAP Center assisting.