With a long day ahead of us, we knew we needed some energy, so a brunch at a family-owned restaurant was in order to start the day…but, we looked forward to a busy day at the JFK Presidential Library, the State Capitol, and the Freedom Walk.

The Hammersmith Family Restaurant opened in 1974 and has been run by the Agganis Family ever since.  It had a diner vibe with big, comfy booths that beckoned us. Since it was still pretty early in the day, we all decided on brunch, settling in with the breakfast menus. 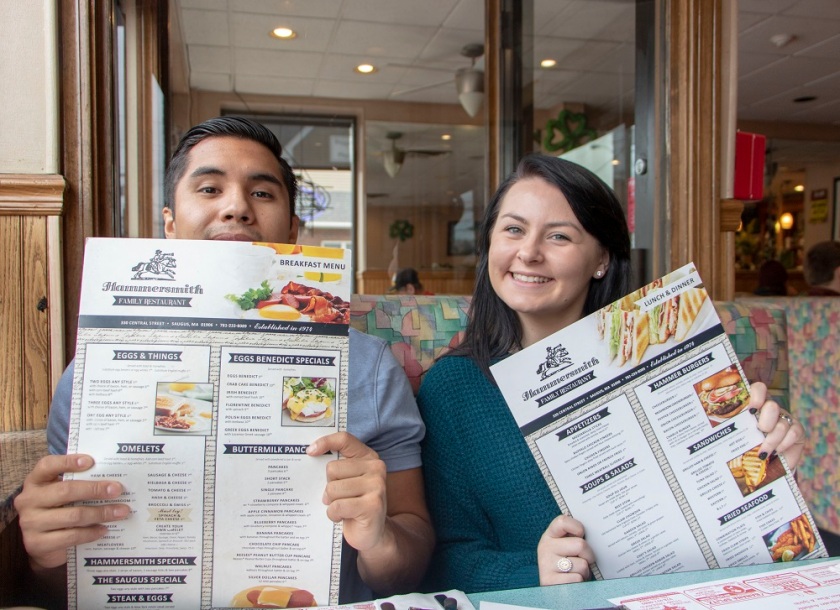 Makayla had the French toast with bacon and sausage; Francisco and Sawyer ordered eggs, bacon, potatoes, and toast; and Victoria straddled the breakfast-lunch timetable with a grilled ham and cheese sandwich.

And while none of us were particularly adventurous at this meal, we were all intrigued by the banana pancakes that were not only topped with bananas but had bananas mixed into the batter. 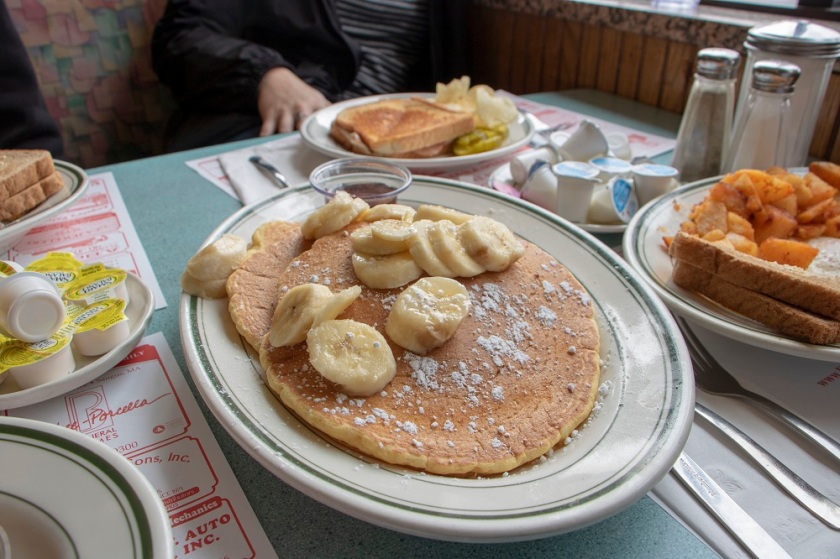 Designed by world-famous architect I.M. Pei in 1977 and opened in 1979, the JFK Presidential Library and Museum proudly perches on an overlook of the Boston Harbor. The view of the sweeping vista pays homage to Kennedy’s lifelong love for the sea.

Awaiting our turn to view the short biopic, we studied the displays in the “Young Jack” exbibit. We learned that, despite the underwhelming grades on his report card and, most notably, his “C” in Public Speaking, a completely average student can get into Harvard and become President.

In one display stand sat a coconut inscribed with a message informing of his location when he became stranded on an island after his Navy ship, PT-109, sunk following an attack by the Japanese during WWII. That coconut sat on his desk for the duration of his presidency to remind him of those who died on that fateful day.

The short film provided an overview on his early life, the time he served in the Navy, getting elected to the House of Representatives and Senate, and, finally, becoming the Democratic nominee for the presidency.

On the heels of the film, the first exhibit detailed the era in which JFK began his campaign trail for the presidency. 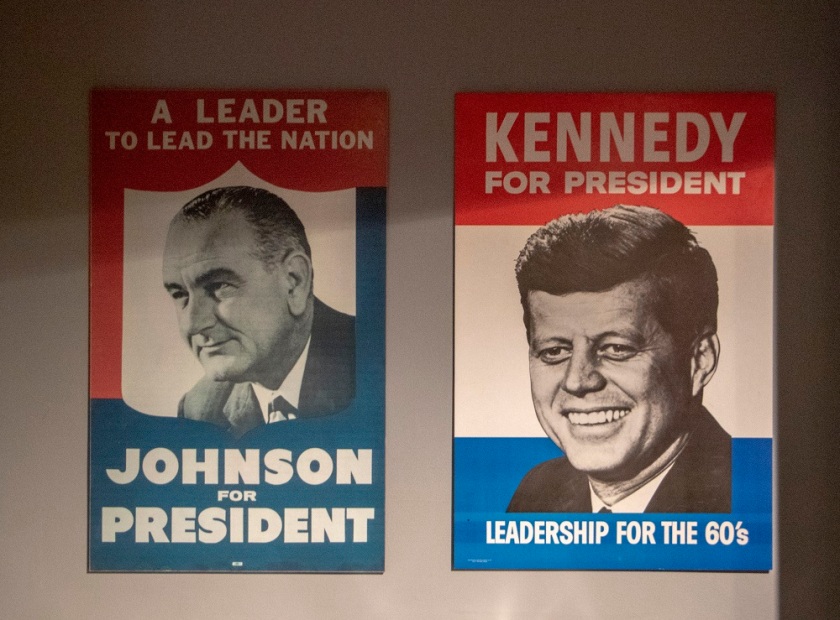 The hallway was replete with displays outlining the age of consumerism as well as a room mimicking what a campaign for JFK would look like. Most interesting was the Kennedy family Bible brought over from Ireland by his forebears. In it are records of Joseph P. Kennedy and Rose E. Fitzgerald’s marriage and the births of their nine children, including John Fitzgerald Kennedy. JFK used that Bible when taking his oath of office as the 35th President of the United States. 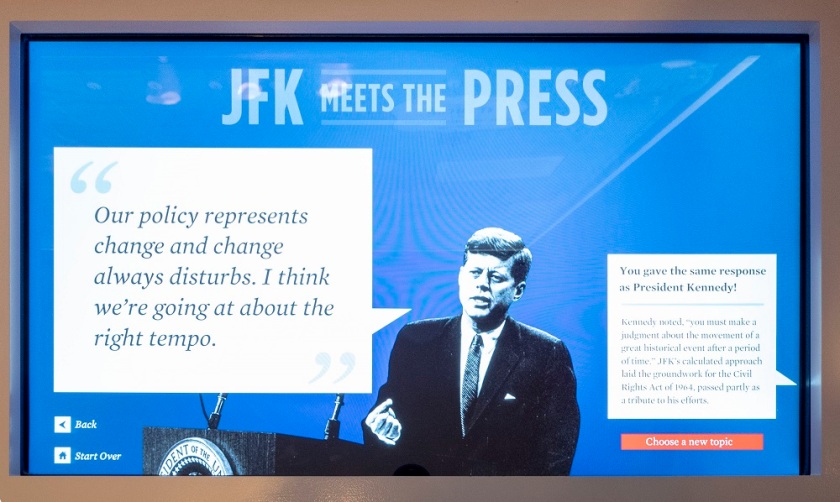 There was a room in the museum dedicated solely to his efforts to beat the Soviets to the moon during the Space Race that even included Freedom 7, the space capsule that held the first American to go to space, Alan Shepard, Jr.

Desperate to make allies out of foreign nations, JFK curated the Peace Corps, a government-funded program aimed at aiding Third World countries in their struggles with disease, illiteracy, and poverty. Though these people were volunteers and did not receive a salary, they often returned with a greater appreciation of their host country which promoted international understanding.

In the midst of the Cold War, there were many close calls with the possibility of thermonuclear war among the superpowers of the globe. Following years of increased tension and the Bay of Pigs debacle, the U.S. found itself backed into a corner, most notably when spy planes received intelligence reports that the U.S.S.R. was constructing missile sites in Cuba – just 90 miles from American shores. Luckily, JFK and his correspondents were able to negotiate with Soviet Premier Nikita Khrushchev. The thirteen days of teetering on thermonuclear war is known today as the Cuban Missile Crisis.

Throughout the halls were many artifacts given to Kennedy during his administration. One of these gifts stood out among the others. It was an apology letter signed by the captain and crew of the Destroyer Amagiri of the Imperial Japanese Navy, the ship that sunk Kennedy’s during his time in the Navy.

Some other items were interesting.  They had two watercolors done by Jackie Kennedy that she gave to Jack.

Indeed, the items relating to Jackie were among the most interesting in the Museum.  Whether it was her Inaugural gown…

…or her trompe l’oeil closet, her presence in shaping the Museum was palpable.

Unfortunately, two exhibits were closed for renovations, but we were happy with the opportunity that we were given to glimpse the life of the iconic, young President and his beautiful Museum, both in the interior…

And, we had more government to see in Boston.

As our “North East Expedition” was coming to an end, we truly had saved one of the best buildings for last. Completed in 1798, the Massachusetts State House is widely noted as one of the more divine and oldest buildings in the country.

The State House sits at the top of Beacon Hill in Boston, on land that was once John Hancock’s cow pasture. We started our tour in the Doric Hall.

Its architectural double row of Doric columns spaced through the center passage area of the room provided a great backdrop for several statues of notable American heroes like John Hancock, Abraham Lincoln, and George Washington.

The Hall also serves as a reception room for social gatherings and official ceremonies. 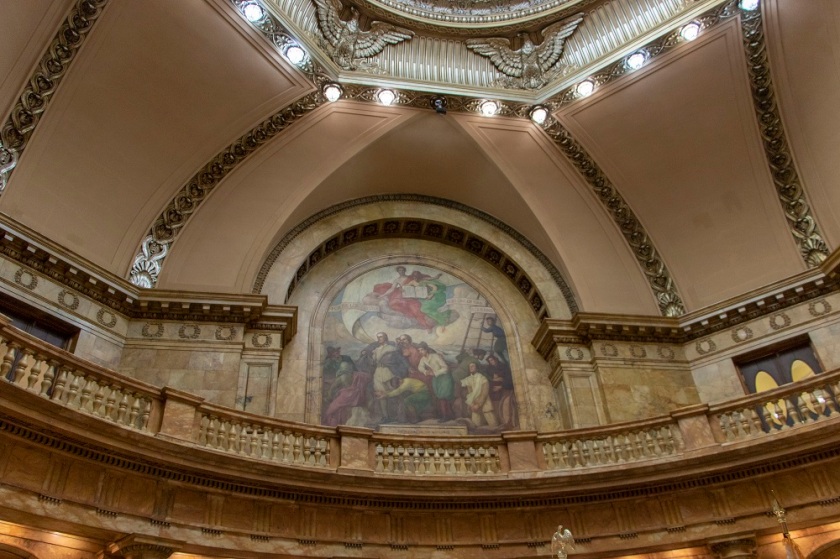 We proceeded to the Hall of Flags, a circular room surrounded by tall columns of Sienna marble. This room displays transparent versions of the 400 original flags carried to battle by Massachusetts men dating from the Civil War through the Vietnam War.  (Since the Vietnam War, regimental battle flags are ‘returned’ to Washington, D.C.) 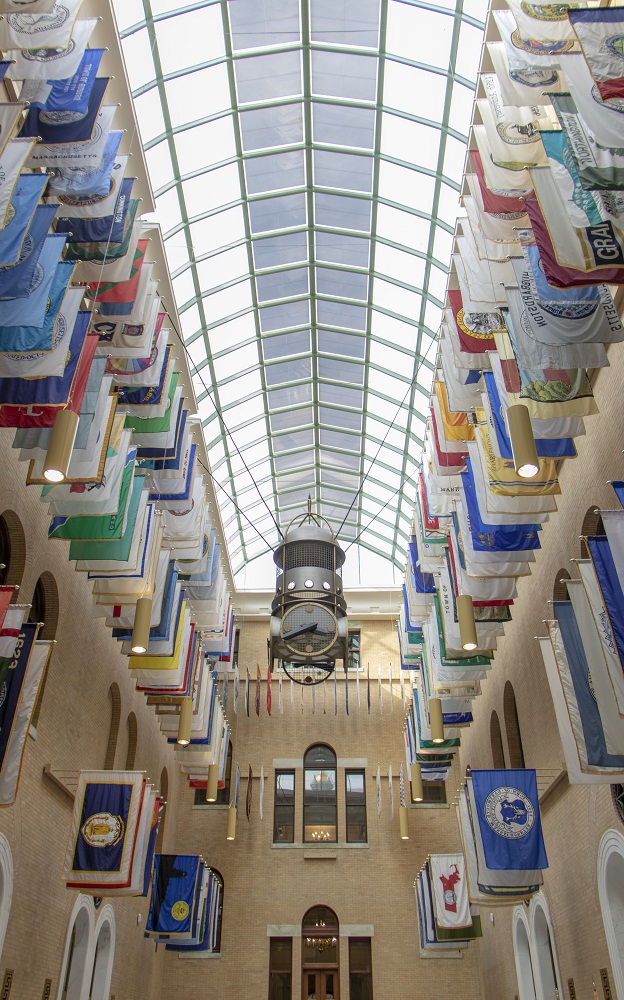 The Great Hall serves as a ceremonial space with flags from 351 Massachusetts towns decorating the room (and helping with acoustics).  They even have dedicated holders for those towns that haven’t yet submitted (or in some cases, created) their own flag.  In the center hangs a large clock in a modern style made to resemble aspects of Massachusetts culture, such as a lobster trap or a bell tower, but is clearly left to the observer to decide.

The Senate and House Chambers are located on the second floor, and each has its own interesting symbol on display. In the House chamber, above the public gallery, hangs a large wooden fish reportedly given by a merchant. 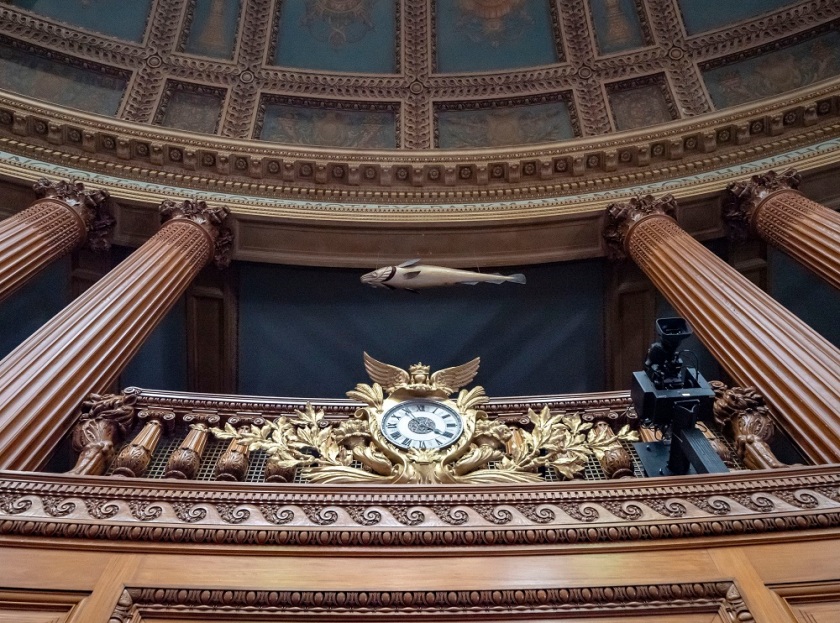 Known as the “Sacred Cod,” it serves as a reminder to the legislators to not pass any laws that will damage the fishing industry that Massachusetts relies on.

The Senate Chamber also houses its own fishy good luck charm; however, they are prohibited by the House to include the word ‘cod’ anywhere in the name, so they named their version the “Holy Mackerel.”

One of the newest additions to the building is an art collection called “HEAR US,” a gallery with plaques dedicated to women who made major contributions to the state’s government, such as aiding in the push for equal rights among races and for women’s suffrage.

At the end of the tour we roamed the Capitol halls, fascinated with Massachusetts’ rich history as displayed throughout the building. From Colonial days to present day, displays and exhibits touted the many courageous men and women who served the state and the nation. Just as we fell in love with the city, we indeed admired the State House in similar fashion. 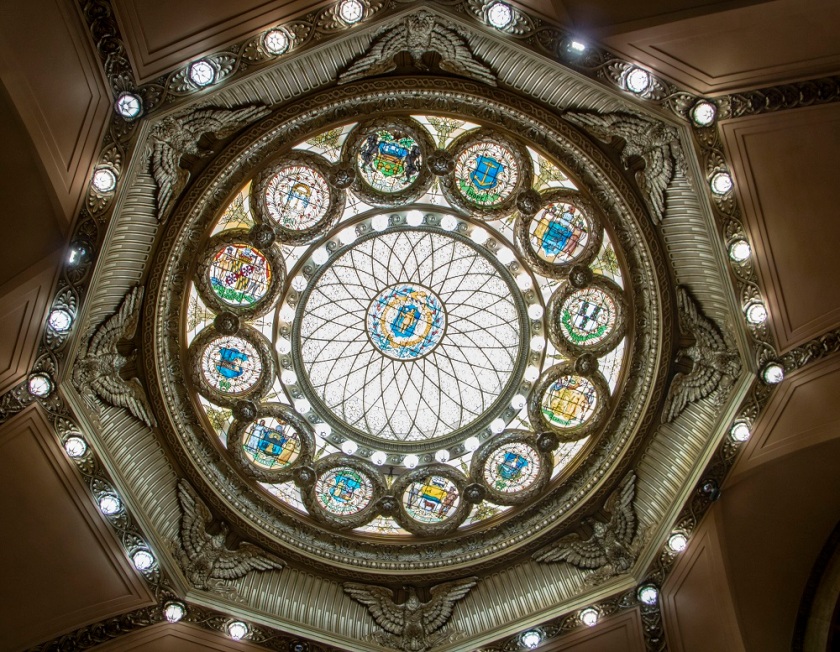 We wished we could stay longer, but we wanted to make it through Boston’s famed “Freedom Trail”  before sunset.

There are seventeen stops along Boston’s “Freedom Trail,” and we hit most of them.

Our first stop was the Granary Burying Ground, the third-oldest cemetery in Boston.

The cemetery was closed by the time we stopped by, but we were still able to make out the writing on some of the headstones denoting the final resting places of many historically important Americans such as Paul Revere… 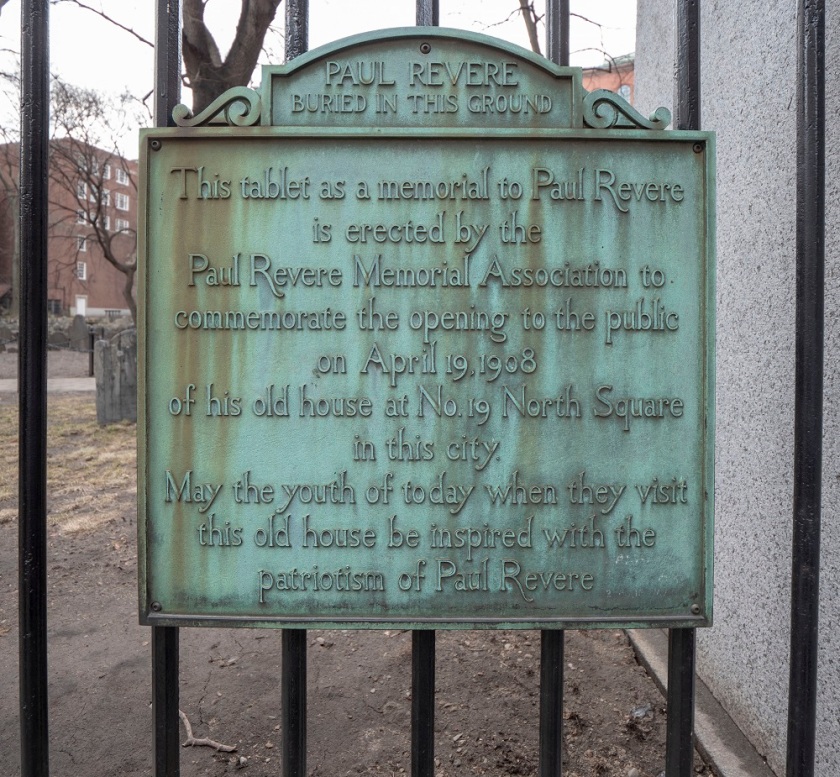 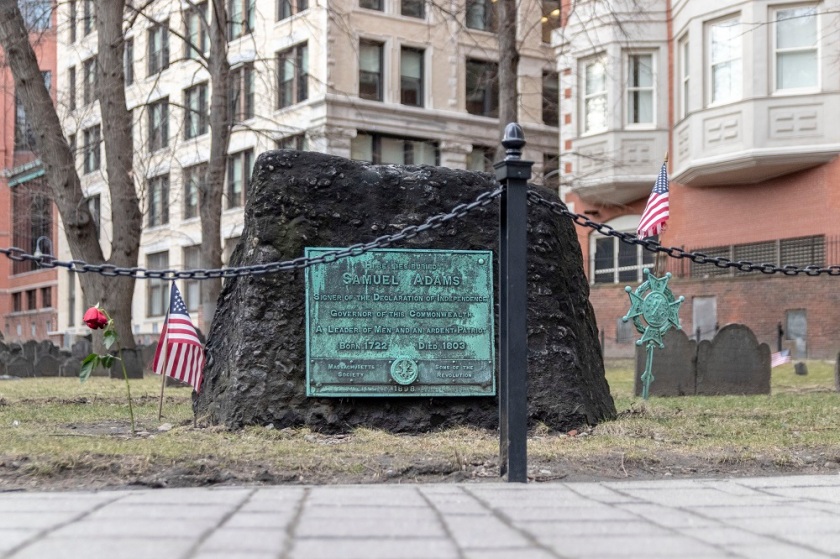 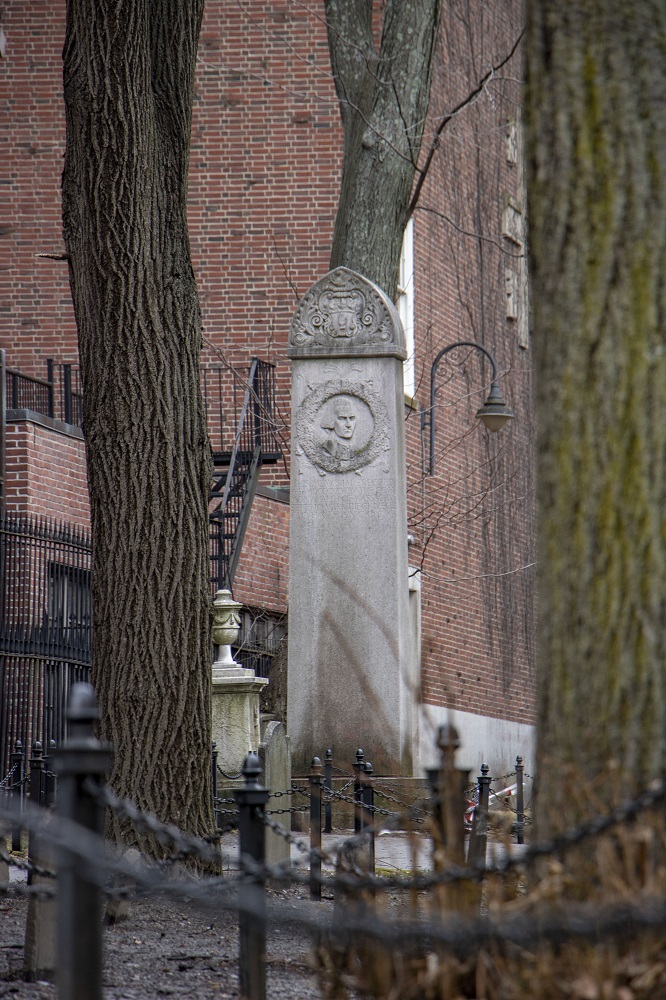 and James Otis (the first to exclaim “no taxation without representation”). 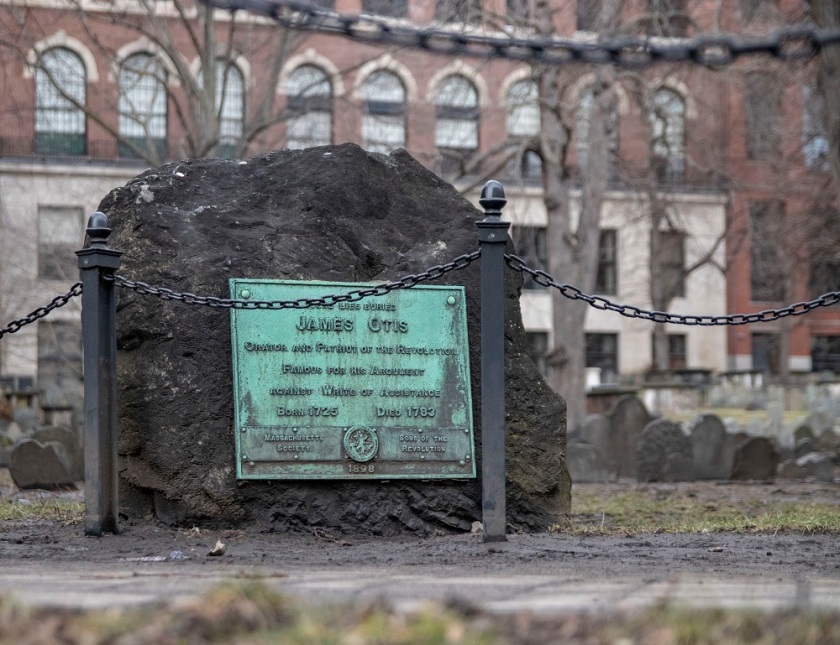 We also saw the Old City Hall, which features a statue of Ben Franklin, who was born in Boston. 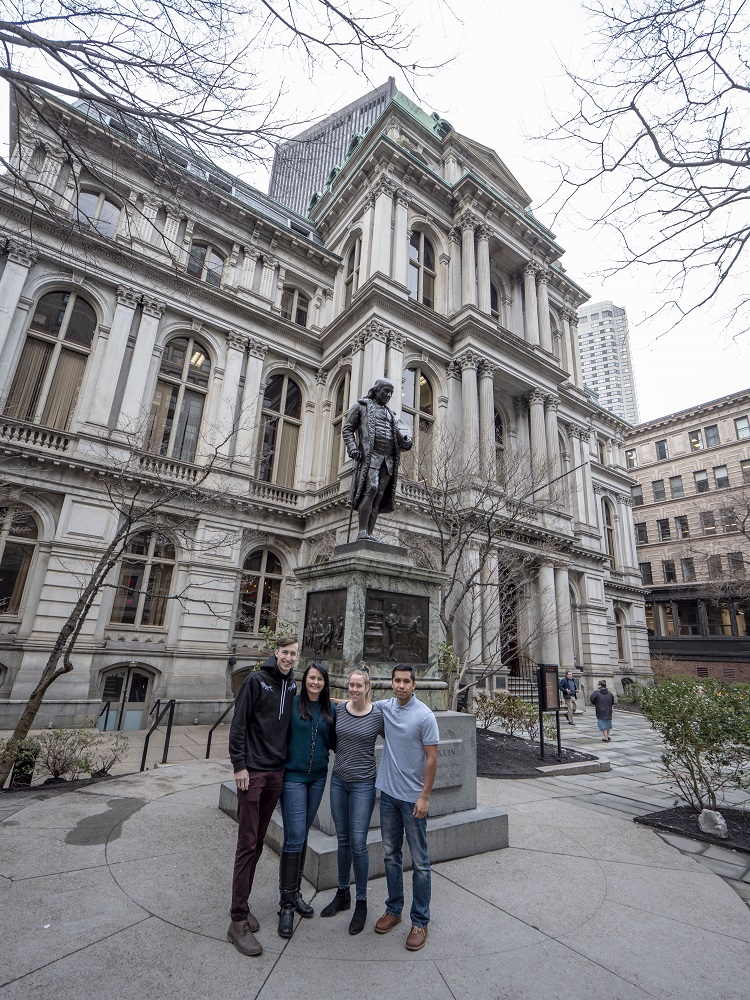 Further down the Trail, we found remnants of a Richard Haas mural that had been mostly obscured by the adjacent building. The mural was originally meant to look like a building under construction using trompe l’oeil painting techniques.

Leaving the Haas mural, we headed for the Old State House which originally housed the colonial government and then later the newly-formed state government.

It’s a true testament to the building standards of that long-ago time.  We were so busy snapping photos of it that we almost missed the Boston Massacre Memorial!

The memorial is essentially a cobblestone sidewalk inset circled with an inscription, and it is easy to miss if you aren’t looking straight down.  It was a little underwhelming, honestly.

We posed for a couple of photos there and then moved on down the Trail toward the Paul Revere House. It was closed, too, so after an “outdoors” photo op… 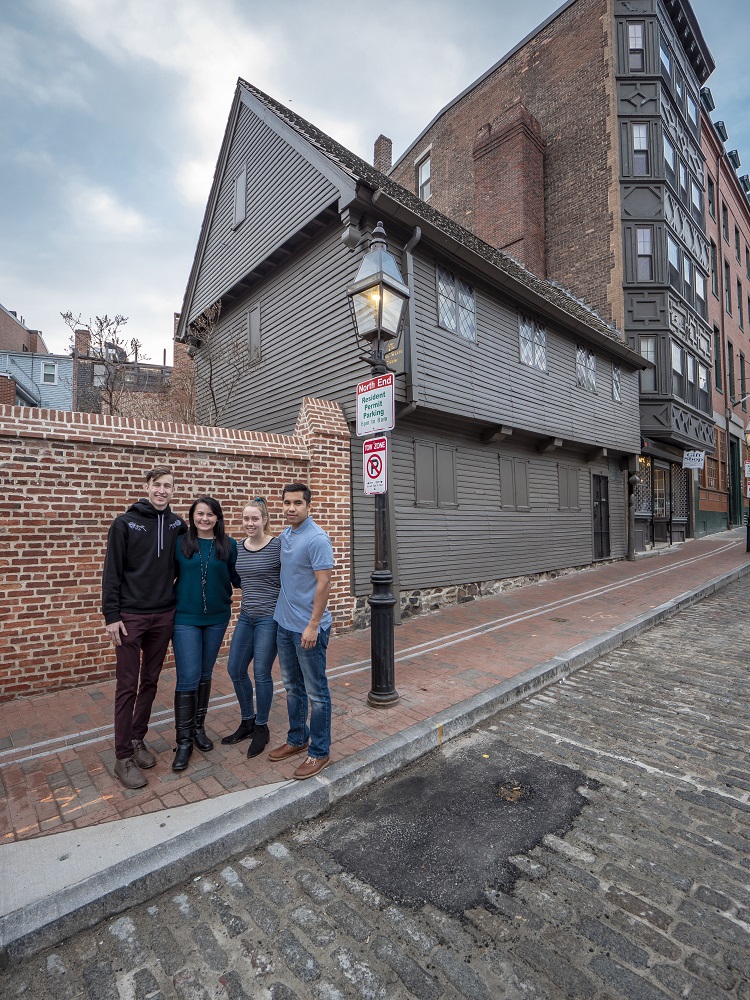 …we headed to our last stop of the day and not-quite-historic site.

With all the crowds, we almost missed the replica of the original set where the television show “Cheers” was filmed!

Originally the Bull & Finch Pub, the name was later changed to Cheers after the show’s popularity soared. The Bull & Finch was the inspiration for the bar’s façade in the show, while the interior was completely invented for television.

Two among us who are of legal drinking age shared a Samuel Adams Boston Lager and were able to say that we visited Cheers while in Boston!

Once we felt that we had enjoyed all of Boston that we could in one day, we loaded up and returned to the hotel for much needed rest. 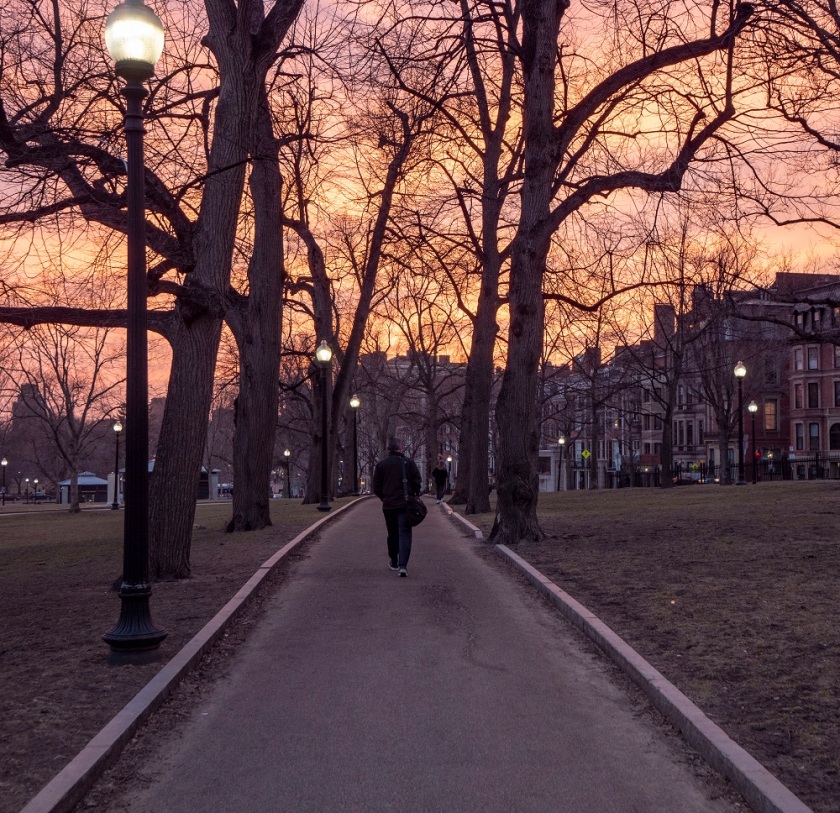